Post Donald Trump's unsolicited, mediatory hand in 'solving' the Kashmir issue, India has to frame its Pakistan policy in the light of the Afghan talks and the FATF ruling 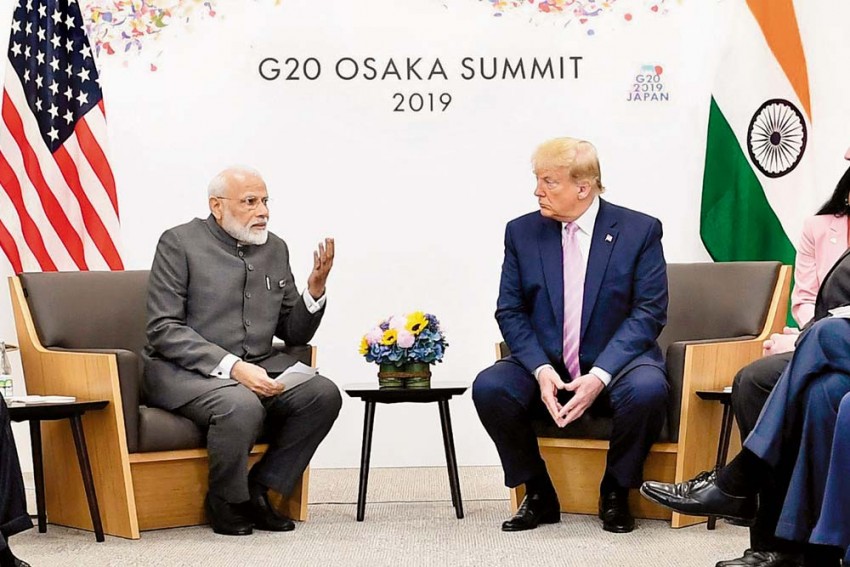 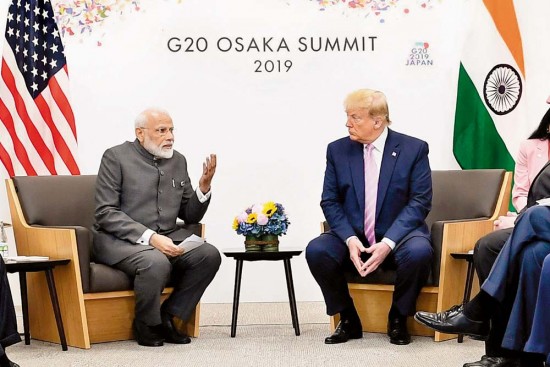 The stream of misinformation, to put it mildly, befuddled the world, and it started right from January 2017, when Donald Trump assumed office as president of the United States. Since then, he has shown an endless appetite for creating controversy through deceit and rude comments, mostly through tweets directed both at leaders he claims are ‘close friends’ and at a long list of bêtes noire. The marvel is how impervious he is to howls of derision and protest, of being cal­led a peddler of barefaced lies, a willing victim of delusional urges. Those beady eyes and upturned chin conc­eal a stone wall of the highest integrity.

His latest salvo from Washington early this week targeted Prime Minister Nare­ndra Modi. Trump’s claim that Modi had sought his mediation on the Kashmir dispute with Pakistan sparked angry deb­ates, speculation and an adjournment of Parliament’s proceedings, along with a hurried and categorical rebuttal from the Indian foreign minister.

The sharp reaction in India is understandable. ‘Third party” mediation inv­olving Pakistan and Kashmir evokes a long list of bad memories. On most such initiatives in the past decades—many of which continue to haunt political  leaders—India had ended up hol­ding the ‘wrong end of the diplomatic stick’, while the gains were mostly extracted by its obdurate western neighbour.

“We have suffered every time we sought outside help to resolve issues with Pakistan,” says former foreign secretary Kanwal Sibal.

The furore in Parliament over Trump’s claim and the alacrity with which foreign minister S. Jaishankar assured the agitated MPs that there had been no shift in India’s stated position and, likewise, not an iota of truth in Trump’s statement, clearly indicates the sensitivity of the issue.

The fact that the foreign ministry had dug out the minutes and records of the Osaka meeting between Trump and Modi in which the ‘request’ was allegedly made, showed that the government is leaving no scope for speculation on not only a ‘third party’ mediation but also on expectations that India might return to the talks table with Pakistan soon.

The spur to Trump’s claim was, of course, Pakistani Prime Minister Imran Khan’s maiden visit to Washington, which generated hope that a positive outcome of the Trump-Khan meeting might result in an early resumption of India-Pakistan dialogue. 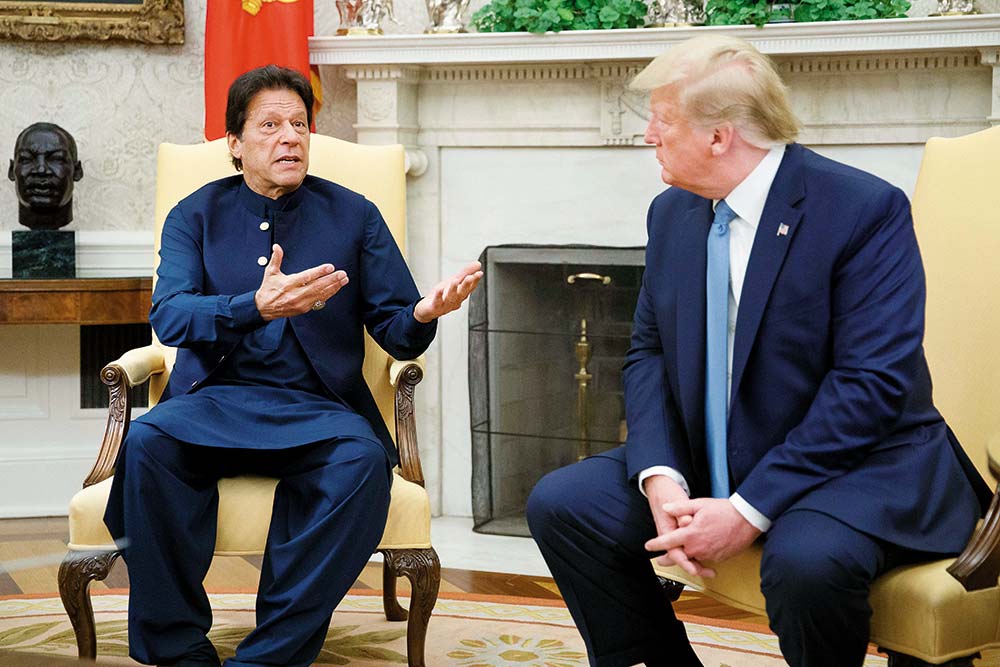 “If I can help, I would love to be a med­iator,” Trump told Imran in the White House. “If I can do anything to help, let me know,” he added. Then came the bombshell, as Trump went on to say, ”I was with Prime Minister Nar­e­ndra Modi two weeks ago (on the G20 sidelines in Osaka) and we talked about this subject and he actually said, “ Would you like to be a mediator or arbitrator,” I said, “Where,’ he said ‘Kashmir’.”

In return for bringing the Taliban to the table, Pakistan would expect the US to resume aid. India, too, must keep up pressure on Pakistan.

The Pakistani PM’s response was on expected lines: “The prayers of over a billion people will be with you if you can mediate and resolve the situation.” Trump, by now puffed up in self-importance, went on to say that since both Indian and Pakistani leaders wanted him to mediate it was time he spoke to Modi to see how it can be taken forward.

But India moved in swiftly to scotch all possible rumours. “I would like to categorically assure the House that no such request has been made by the prime minister to the US president,” Jaishankar told Parliament. “It has been India’s consistent position that all outstanding issues with Pakistan are discussed  only bilaterally.”

He also emphasised that any engagement with Pakistan would require an end to cross-border terrorism, adding that “the Shimla Agreement and the Lahore Declaration provides the basis to resolve all issues between India and Pakistan bilaterally”.

However, some commentators point out that both India and Pakistan had agreed on a number of occasions on third-party mediation, like the Indus Water Treaty (brokered by the World Bank in 1960), the Rann of Kutch Accord (mediated by British premier Harold Wilson in 1965) and the Tashkent Agreement to restore peace at the end of the 1965 war (initiated by Russian statesman Alexei Kosygin and others), all of which worked well for the two neighbours. Some even stood the test of war and other hostilities.

However, as Sibal points out, India faced a string of disappointments from the time it went to the UN on the Kashmir issue. This continued with UN-appointed mediators on Kashmir; the Indus Water Treaty, the Duncan-Sandys mission and the Tashkent Agreement. None of these initiatives ended with gains for India, says Sibal. “At Tashkent, we had to return the Haji Pir pass. With the IWT, we lost 80 per cent of the Indus river basin and accepted mediation on upstream projects.” The Duncan Sandy mission, in the wake of the Chinese aggression in 1962, led the UK and the US to supply arms to India but with the provision that they were not to be used against Pakistan. It further stipulated that New Delhi should take the initiative of resolving the Kashmir dispute so that the two neighbours could jointly deal with the threat of Communist China. Similarly, the Wilson mediation over the Rann of Kutch dispute ended up awarding areas to Pakistan that were part of India’s sovereign claim.

However, going by the backtracking in the US administration to distance itself from Trump’s comments on mediation, Indian leaders may not receive more such worrisome offers from Washington. But the import of the Trump-Khan meeting and what it means for both US-Pakistan relations and also for India-US ties are being closely studied.

Not just a PM’s maiden visit to Wash­ington, the significance of Khan’s visit comes in the backdrop of a long spell of strained ties with the US and eagerness shown in both capitals to mend the rupture. The fact that, in an unprecedented gesture, Khan also had Pakistan army chief Qamar Javed Bajwa and ISI director-general Faiz Haneed with him indicate that the three key members of the Pakistani establishment would be on the same page on agreements that are reached in Washington.

A lot of emphasis, as past week’s developments have indicated, would be rel­ated to Afghanistan, a country from where Trump is in a rush to pull his troops out after fighting the US’s longest war, marked, in the end, by a resurgent Taliban. Pakistan’s imp­ortance has grown for its ability to deliver the Taliban to the talks table and also with the promise that it can make the Taliban agree to an US-initiated plan to restore peace in Afghanistan after the Americans leave.

In return, much of the financial and military aid from the US to Pakistan that had been frozen for several years were now likely to resume. New Delhi’s goal would be to keep up the pressure on Pakistan for its use of terrorism as the preferred tool against India.

The first test for this is this October, when the Financial Action Task Force plenary session meets in Paris to decide whether Pakistan should remain on the grey list, whether it should be brought under the ‘black list’ for its lack of action against terrorist groups or if it should go off the list altogether.

The Imran Khan government would certainly try its best to use the ‘Afghan card’ to enlist support from not only the US, but also from China and Russia—the other global players in the Afghan talks. In this advantageous scenario for Pakistan, to force it to take ‘visible, veri­fiable and irreversible’ steps against ter­rorist outfits operating from its soil would be a diplomatic challenge for India.

The outcome at the FATF may help India determine where it stands not only vis-a-vis Pakistan, but also with the US, Russia and China, those ‘third-party’ arbiters of Pakistan’s stand towards India.