Home  »  Magazine  »  International  » Under Siege »  Bouncers And Yorkers! Why Showman Imran Khan Is In A Big Soup At Home

Bouncers And Yorkers! Why Showman Imran Khan Is In A Big Soup At Home

After failing to win the world with his Kashmir rants, Imran Khan faces the challenge to retain power in Pakistan. Will the Azadi March topple him? 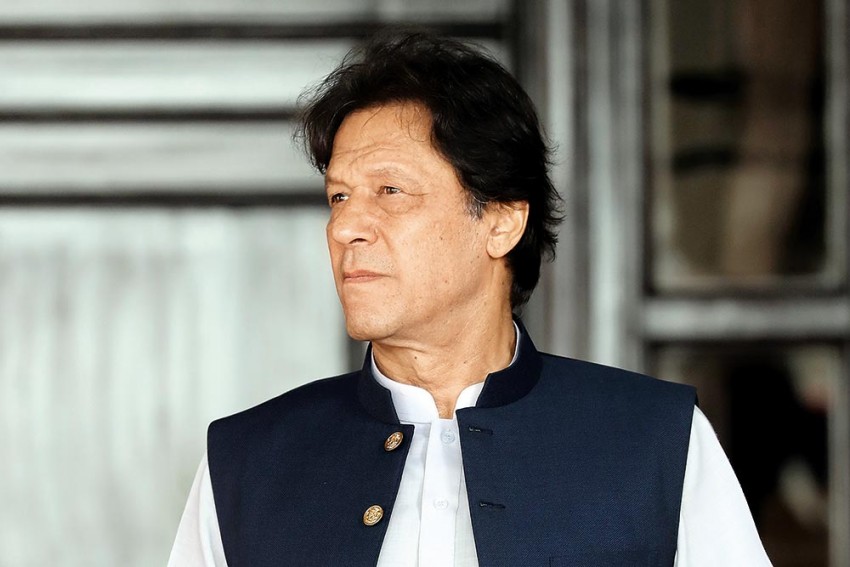 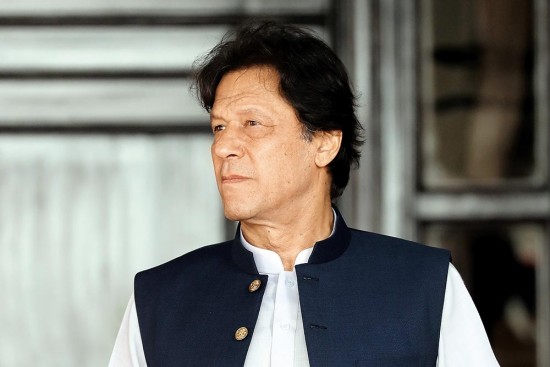 The public image of Pakistan Prime Minister Imran Khan being in suave, unflappable, consummate control of his nation’s polity is not, it seems, supported by ground realities. The brave front put up by Imran notwithstanding, things are unravelling fast for him.

Already under mounting pressure from the Financial Action Task Force (FATF) for his inability to take adequate action to curb terrorists operating from Pakistani soil, Imran is now facing a new challenge from within that threatens to throw him out of power.

A nine-party alliance of the major opp­osition political parties has come together, demanding that the Pakistani premier be ousted for his all-round failure to rule judiciously.

And, in step with well-rehearsed Paki­stani practice, on October 31 they plan to organise a 1.5 million-strong rally—dubbed the ‘Azadi March’—from Lah­ore and other regions to Islamabad. Their goal—nothing less than the overthrow of the Pakistan Tehreek-i-Insaf (PTI) government. Their main grouse—Imran’s supposed failure to deliver on his electoral promise of a ‘new Pakistan’, with development and prosperity for all.

Ever the showman, Imran had spent much of his time sprucing his image as a liberal peacenik who wanted stability in South Asia and beyond, while ignoring much of the pressing problems at home.

India’s August 5 decision to abrogate Article 370 of its Constitution that gave offered special status to Jammu and Kashmir and bifurcating the state into two Union territories had caught the Imran Khan government by surprise. Under mounting pressure from political detractors, the PM was forced to raise his pitch several notches, adopting an ext­remely hardline position against India.

He followed it up with attempts to int­ernationalise the Kashmir issue, with largely disappointing results.

In recent days, to cover up for those disappointing forays and pose as a statesman of international stature, Imran off­ered to play mediator in West Asia to resolve the crisis between Iran and its regional foes. Though his attempts may have gone down well with camp followers, for the ordinary Pakis­tani reeling under the ill-effects of an economic crisis, they rang empty. The forthcoming countrywide rally against him is a reflection of that surging dissatisfaction.

Ironically, it was another ‘Azadi March’, in 2014, that had propelled Imran to political centrestage. Subse­quently, it led to the ouster of the Nawaz Sharif government, bringing PTI to power. Five years down the line, a similar mass demonstration, by the same moniker, aims to pull Imran down.

Behind the palpable political animus runs layers of open sores. Imran’s gov­ernment is plagued with an acute eco­­­nomic crisis almost from the first day—it inherited a huge debt burden, forcing the PM to seek a bail-out from the IMF and substantial financial assistance from friendly nations. Concur­rently, poli­tical opponents were hit by ­corr­uption charges—some were jailed—marginalising them significantly. It allowed those beleagured rivals to brush aside their differences and unite against Imran. 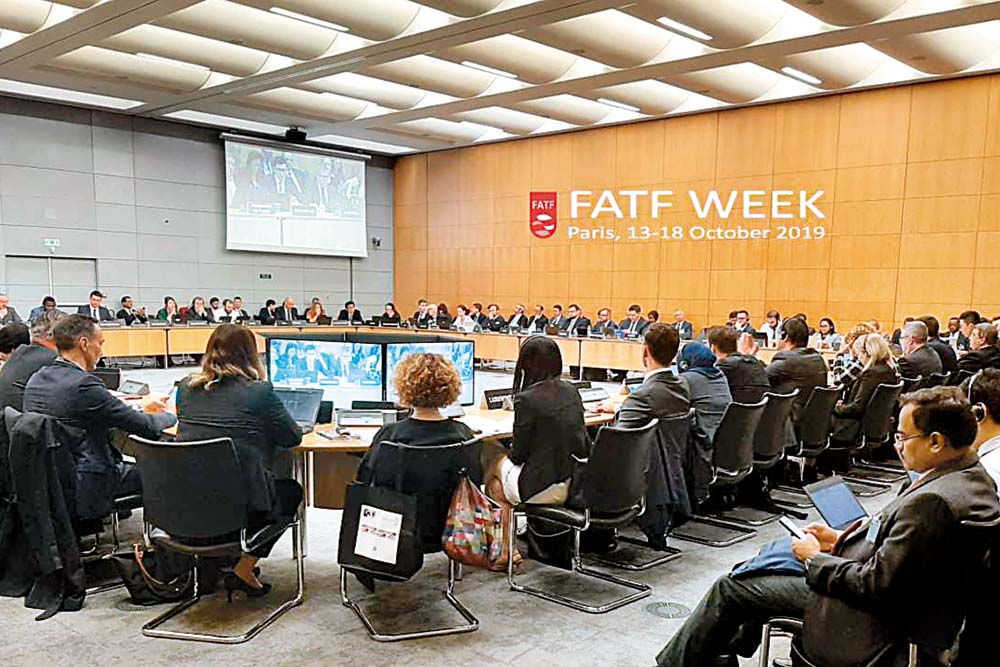 FATF plenary session, which had a stern message for Pakistan.

These domestic developments are taking place in the backdrop of the close int­ernational scrutiny that the FATF has put Imran’s government under. Nervo­us­ness over its fallout may have been discussed by the government behind closed doors; it is surely being publicly debated by sections of the Pakistani media.

The leading English daily of Pakistan, Dawn, commented, “The latest message from Paris is unmistakable. The tone of the Financial Action Task Force on the conclusion of its plenary indicates how seriously the world is taking Pakistan’s inability to meet global anti-money laundering and counterterrorism fina­ncing standards.” Indeed, FATF president Xiangmin Liu had noted on the occasion: “Pakistan needs to do more [to fix the weaknesses in its anti-money laundering/combating financing for terrorism regime] and it needs to do it faster. Pakistan’s failure to fulfil the FATF global standards is an issue we take very seriously.”

He then followed it up with a warning, the first since Pakistan was placed on the FATF grey list in June 2018 for an intense monitoring process, that the country has only until next February to make “significant progress”. It must do this across the full range of the 27-point national action plan agreed on with the FATF, or risk action which could inc­lude Pakistan being blacklisted along with countries considered a haven for financing terrorism.

Worse, such dire warning emanating from the plenary is the opposite of what Imran’s ministers and officials had projected. Contrary to official claims, Pakistan has missed the third deadline for implementing the measures required to exit the grey list. Only five of the 27 measures have been ‘largely’ addressed.

A grievous fate awaits Pakistan if the FATF relegates it to its ‘black list’—it will keep away potential foreign investors from coming to Pakistan, curb its borrowing credibility from outside and further weaken an economy widely believed to be teetering on the brink of a full-blown crisis.

However, the focus of the Imran Khan government now seems to be on the threat posed by the impending ‘Azadi March’. The PM has sought the army’s help to curb the movement of protestors and stop them from reaching Islamabad, where they have threatened a sit-in demonstration that has the pot­ential to bring the city to a halt.

Imran’s government had also constituted a negotiation team to engage the opposition leadership, to have them call off the march. So far, such efforts have met with  little success. The Jamiat Ulema-e-Islam-Fazl (JUI-F), which took the initiative for the anti-government protest, have been joined by the Pakistan Muslim League Nawaz (PML-N) and Pakistan People Party (PPP) and several others.

A ‘camel caravan’ campaign was also part of the JUI-F’s attempt to garner support for a month-end march in Sindh.  The lawyers association in Lahore and elsewhere have made it clear that the government should not try to use the army or security forces to scuttle the march—a clear indication that they, too, were stoutly behind the protest.

In the face of this mighty show of opp­osition anger, the prime minister predictably tried to flog the Kashmir issue as a diversionary tactic—an effort to mobilise the nation through a countrywide Kashmir solidarity day on October 27. But with international players keenly watching his moves to ensure that such events do not encourage violence in the Valley and allow infi­ltrators to sneak into India and wreak violence, the Pakistani PM seems to have little room to manoeuvre.

Irrespective of how most Pakistanis respond to his Kashmir call, many are predicting that since Imran’s position in parliament is not too strong, the sit-in demonstration on October 31 can indeed put Imran Khan in a major spot of bother.

How Imran manages to succeed in repulsing the massed opposition ranks and dissolving the crisis before it rea­ches his doorstep will be keenly watched by millions of his countrymen and other interested parties in the reg­ion and beyond. At stake is Pakistan’s fra­gile political stability.

Tell Us When The Whistle Blows