Words Were All It Took 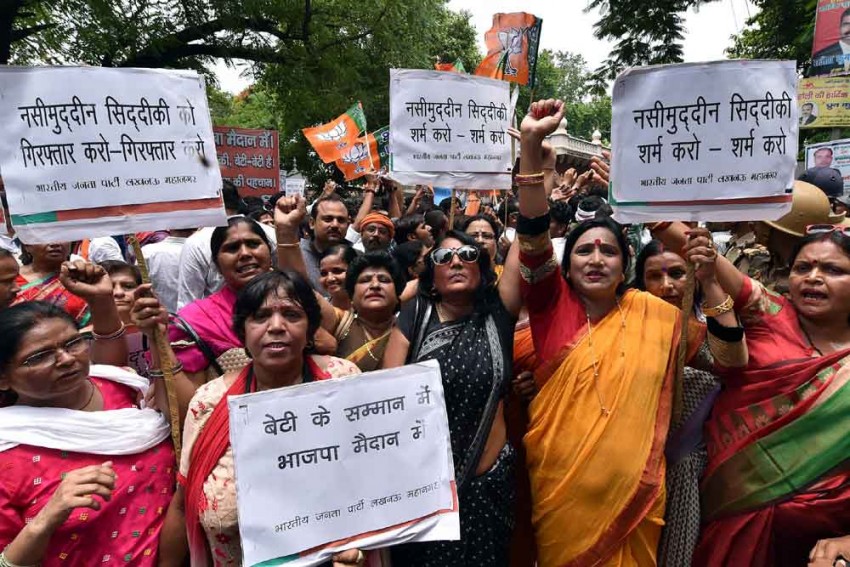 ON THE RIGHT
Women activists of the BJP protest slurs and threats against Swati Singh and her daughter
Photograph by Nirala Tripathi
Sharat Pradhan July 29, 2016 00:00 IST Words Were All It Took 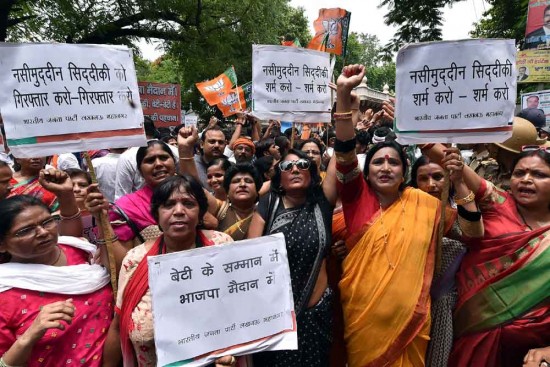 It’s now a battle between the “Dalit ki beti” (Mayawati) and the “insaan ki beti” (Swati Singh), as the wife of the abscond­ing BJP leader Daya­shankar Singh has been busy projecting herself, aggrieved by offensive slogans raised by Mayawati supporters. And the BJP believes it has recovered the ground it had lost when Dayashankar seemed to draw a parallel bet­ween prostitutes and Mayawati. 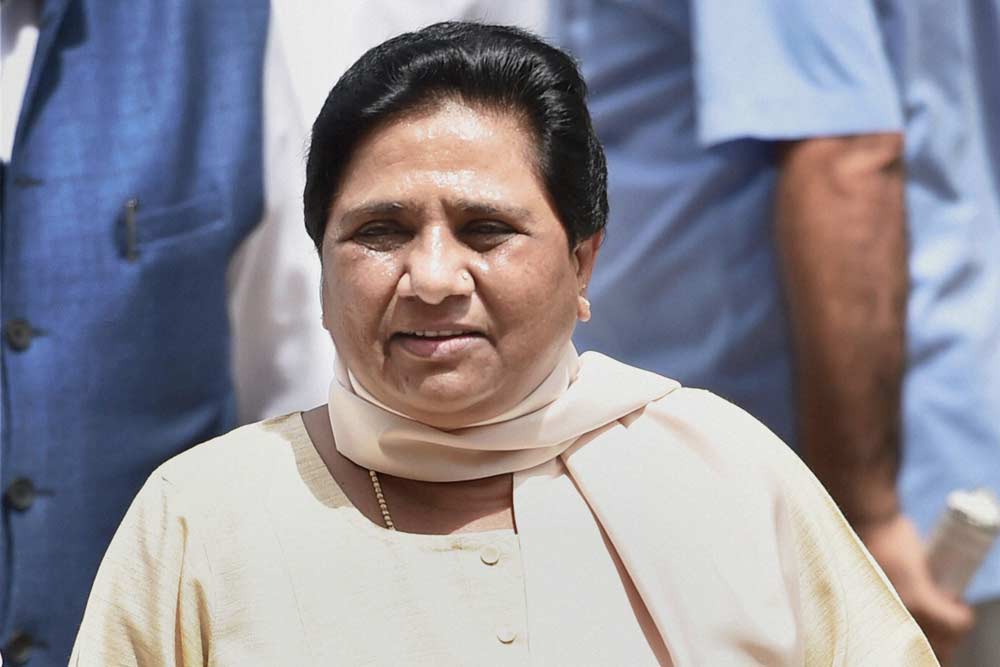 The jury is still out though on whether the BJP has actually retrieved a hopeless situation by pumping up its rhetoric against Mayawati. Last week, it was reduced to tendering an abject apology to Mayawati and expelling Dayashankar from the party. This week, the party has been busy rallying the savarna castes against the perceived ‘audacity’ of the Dalits in insulting the Rajput housewife. Thus, even though round one may have gone in favour of Mayawati, by way of Dalit consolidation, the housewife’s bold act may have turned the tide in the BJP’s favour. However, whether this could crystallise into a meaningful electoral edge to the saffron brigade, only time will tell.

Sure enough, the act of an insolent Dayashankar was seen as potentially damaging for Narendra Modi’s plans to woo Dalit voters before the crucial 2017 UP assembly elections. The completely rattled party did everything to pacify a belligerent Mayawati, who openly deman­ded Dayashankar’s scalp for the derogatory remark he made about her. 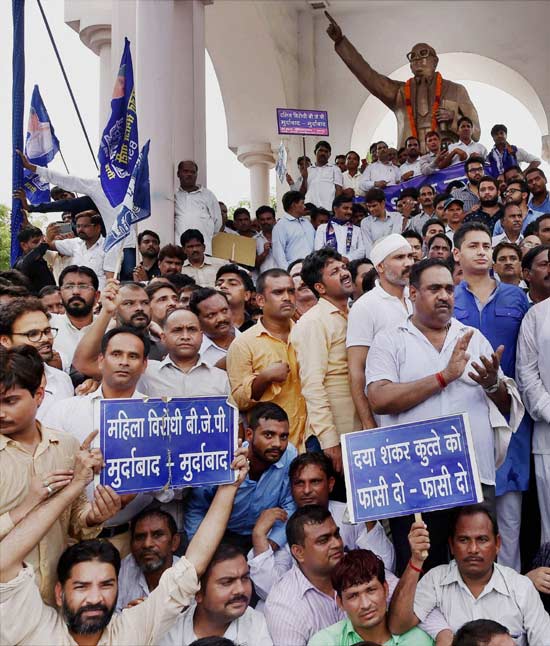 Dayashankar’s removal from the BJP state vice-president’s position for failing to placate a belligerent Mayawati was eventually followed up by his expulsion from the party for six years. The Samajwadi Party ­government in Luck­now lost no time in booking the BJP leader under various sections of the IPC and the SC/ST (Prevention of Atrocities) Act, following which the ­police launched a manhunt for him. Last seen, the abs­conding BJP leader was praying at a temple in Deoghar  district of Jharkhand.

The Thakur leader’s ‘slip of the tongue’ came as a shot in the arm for Mayawati, who was still reeling from the shock of two close party colleagues—Swami Prasad Maurya and R.K. Chaudhari—quitting the BSP. They had even accused her of auctioning party tickets and called her “daulat ki beti” ­instead of “Dalit ki beti”. Interestingly, what Dayashankar said was simply an echo of how Maurya and Chaudhari had described her.

The Dayashankar episode has made it tougher for Mayawati to woo savarna voters, without whom the 20 per cent Dalit bloc isn’t enough to win ample seats.

What sparked off the fireworks was Dayashankar’s add-on: he sought to draw a comparison between Mayawati and a “prostitute”. “Dayashankar should have modified his statement to simply point out that the manner in which Behenji went about giving party tickets to the highest bidders would have put even a prostitute to shame,” says one of his supporters in the BJP. This, even though the law prescribes severe punishment for those who slur or abuse Dalits. No wonder the BSP chief was not one to let it pass. “His wife and daughter must be what he is calling me,” was her giveback.

Emboldened by this stance of hers, Mayawati’s Man Friday and former minister Naseemuddin Siddiqui led a huge band of partymen who went berserk at Hazratganj in the heart of state capital Lucknow. At their sit-in demonstration, the “slogans” that rent the air were calls to “get” Dayashankar’s wife and daughter (“Dayashankar ki biwi ko pesh kiya jaye”, “Uski beti ko pesh kiya jaye”).

However, deathly silence prevailed in the BJP office close by. No one dared at that point to hit back for fear of worsening the party’s standing with Dalits.

The only voice that emerged out of the initial silence was Swati Singh’s. Daya­shankar’s wife had been little-known in public until she decided to take on Behenji and accused her loyalists of traumatising her and her 13-year-old daughter by calling them names. She also filed a complaint with the police while Daya­shankar went underground.

It took some time before the state BJP leadership realised how the political novice Swati’s response to BSP aggression made immense political sense and had given the party an opportunity to recover lost ground. That’s when others in the BJP hierarchy too raised their heads in ­solidarity with Swati. Unsurprisingly, she is now being seen as a potential ­contestant in the 2017 polls, with the BJP’s Thakur lobby projecting her as a symbol of “Thakur pride”. The Dalits had anyway been alienated—why not make a show of not allowing Dalits to walk all over the caste pride of the Thakurs?

Swati got an FIR filed against Mayawati, Siddiqui and other BSP leaders who allegedly used foul language against her and her daughter. The counter-counter-­offensive has created a minor storm by stirring the BJP rank and file into combat mode. In a rare move, Mayawati chose to call off her party’s state-wide protest demonstrations against the failure of the police to arrest Dayashankar. Realising her initial attack was proving to be ­counter-productive, she is also und­erstood to have chastised her partymen for their vitriolic attack on Daya­shankar’s wife and daughter. 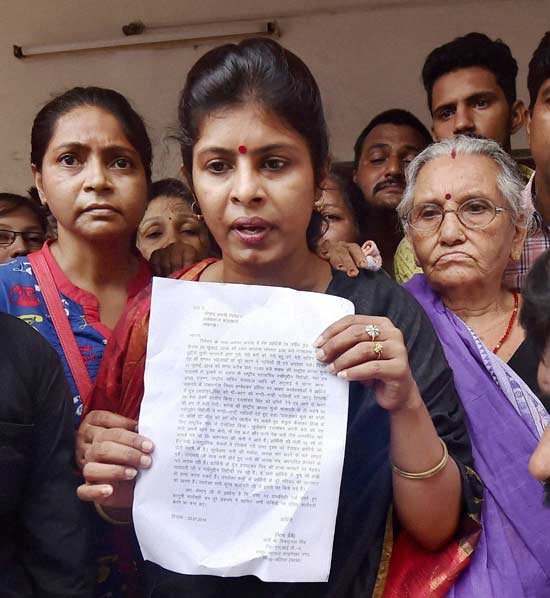 Mayawati’s worry is not just for the Thakur vote, but the entire savarna vote, which she has been trying to woo through her much-hyped ­slogan, “Sarvajan hitaye—­Sarvajan sukhaye”. She knows that even if the 20 per cent Dalit vote went en bloc to BSP, it would still not give the party enough seats to form the government. To repeat her 2007 performance in which she rode to power on her party’s own strength, she would need an additional 10-12 per cent of the votes—an imp­ossibility unless some sections of the savarna castes and a large number of Muslims vote BSP. While Mayawati could still retain the support of many Muslim voters, the Dayashankar episode could well have killed her hope of wooing the savarnas, who have been reacting viscerally to the ­tirade against the expelled BJP leader.

Making matters worse for the BSP was the revolt this week by two more MLAs—Brijesh Verma (Mallawan MLA) and Romi Sahni (Ballia MLA)—who were ­expelled after accusing Mayawati of “selling” assembly tickets for “Rs 4-5 crore” at a press conference. That takes the figure of the rebel BSP leaders to six, creating once again a perception that not everything is alright with the BSP. Daya­shankar, meanwhile, has moved the Lucknow bench of the Allahabad high court, seeking quashing of the FIR and a stay on his arrest. The bench has issued a notice to the state government but ­refu­sed to grant a stay.