Woo To A Kill

The US makes a furious sales pitch on the F-16, dangling visions of a long-term strategic partnership 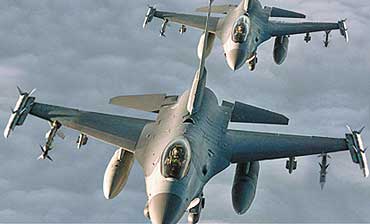 outlookindia.com
-0001-11-30T00:00:00+0553
It seems the Americans want to play for real in India. Bullish as they can be, they are making a serious bid to entice New Delhi with multiple agreements and offers of advanced weapons. For the first time, the Pentagon has allowed US defence contractors to sell fighter aircraft to India to signal the Bush administration's idea of future possibilities. Both the F-16 and the F-18 will vie for the 126 aircraft the Indian air force (IAF) wants to buy. The package will include collaboration and technology transfer with as many as a hundred aircraft being produced in India. 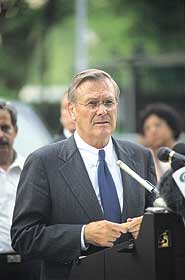 Defence secretary Donald Rumsfeld, publicly worried about China, is pushing hard to strengthen military cooperation with weapons sales. It will increase interoperability—the buzzword of coalition-building—and bring India closer to the US in doctrine, development of systems and training. The Pentagon is carefully laying the pieces in place, sending senior officials to India with greater frequency to assess needs while they make a sales pitch. Both sides realise the induction of US jets into the IAF would be a monumental turn of wider implications.

Lockheed Martin, makers of F-16s, is fighting hard to get into the picture, knowing full well it faces stiff competition from the French and Russian lobbies. In a four-hour interaction with this correspondent spread over two days, senior Lockheed officials promoted their plane as the best, most manoeuverable, and lethal machine available. The warhorse of US and allied air forces—pilots call it the "viper"—wants to be the bulwark of the Indian air defence. Since it would be the first major sale, projected as a "cornerstone" of the relationship, Lockheed says it is putting all the energy needed to showcase their jet. They promise to be competitive, make it uncomplicated, and do the deal in a deliberate fashion because they want India "to come back again and again". There is too much at stake in the relationship to let "rash actions or inactivity" derail it.

"The reliability and maintenance of a US-based system is the order of magnitude that is currently out of other countries' reach," said a senior executive. The first 10 to 12 planes would be delivered off the US production line, another dozen would be assembled in India to help develop a supply line, while the remaining hundred will be made in India. Lockheed is willing to discuss producing the entire aircraft in India once New Delhi decides the precise role of the private sector in defence production.

Ashley J. Tellis, a respected defence expert, says "nothing in the air is as good as the F-16 in a dog fight". He called it a "rocket with wings". The price would be right given simple economics—while there are 1,500 French Mirages flying, there are more than 4,300 F-16s in the air. "The cost per unit is much less. When the US maintains airplanes, the level of components, spares we buy are on a scale other air forces can't even dream of because of the intensity of our operations around the world," added Tellis.

While the Bush administration is wooing India, the problem is, so are other major powers. And for the first time India is spoilt for choice. "They are not doing India a favour. It is a big contract and everyone is standing in line," said an Indian defence analyst. "There isn't a huge difference among the four planes in competition. It will hinge on the avionics, laser-guided systems and ordnance." Besides, the IAF doesn't ever want to be in the same position as Pakistan whose air force was grounded thanks to US refusal to sell spare parts and new planes during the 1990s.

In the end, it will be as much a political decision as a military and economic one. Are the Americans willing to do more between now and then to show their change of heart?

Fruits Of The Loom