They aren't even calling it drought. But a large belt of India is drying to dust. 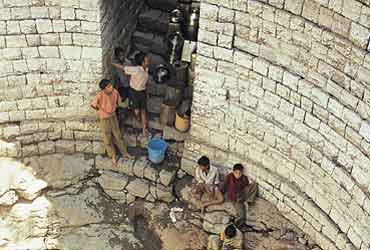 outlookindia.com
-0001-11-30T00:00:00+0553
Drought is a 'boring' ritual for India, visiting thousands of villages, affecting the lives of many millions. In this election year too, the ritual is in full tilt. Village after village in Maharashtra, Karnataka, Andhra Pradesh, Kerala and Rajasthan is now witness to an exodus, as entire families move out to nearby towns, cities in search of water and employment. And it's not as if the cities have been spared either. In fact, groundwater levels in most parts of the country are at an alarming low.

Cold statistics bear this out. Take Maharashtra. Four thousand tankers crisscross 3,983 villages and 7,950 hamlets everyday merely to provide drinking water. In the last drought season, there were 3,661 tankers on the roads. In 197 of the 348 talukas, groundwater has depleted to disturbing levels. As many as one million people are registered Employment Guarantee Scheme (EGS) workers with 12,734 works under execution. There are 700 cattle camps and as many fodder depots functioning. No government department keeps records of migrations but officials say entire villages have been vacated and the number could well be a few lakhs. The government has spent Rs 1279.25 crore on drought relief so far with the Centre handing out another Rs 72 crore.

The irony, however, is that the Maharashtra government, in its records, does not even recognise the drought. For decades, it has negated reality to officially classify the situation as one of "scarcity". As in Maharashtra, every state government has its drought and drought-relief records updated by the time summer begins to scorch. Somewhere in those pages of statistics, people battling the drought (or scarcity) are lost. There are stories of survival and stories of desperation, and an odd one of hope that redemption is round the corner. 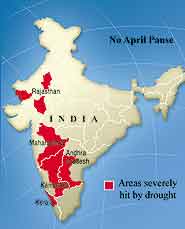 In Sakharde village near Pune, Shantabai Suresh Saste has spent all morning in the deep bowel of the dry well, pushing her numerous pots and buckets. It takes an hour-and-half to fill a 10-litre bucket. That's all the family of five has for 2-3 days. "We take turns to have a bath every two days and we make only rotis," says Saste. The well is dry but there's a tiny stream of clear water that villagers say comes from the foot of the local deity. Tankers are a rare sight. When the tanker does come, it's a mini-riot. Says temple priest Mahendra Gurav: "We don't bother our god to send rain anymore now. When people are dying for water, what can he do?" he says. So, will he vote? "Vote for what?" he asks.

Further up the road to Baramati, the situation is even worse. In Pisurve village, there has been no crop for three years in a row now. Large land owners who employed 30 labourers and saved about a lakh of rupees a year earlier have now migrated to Pune, doing daily wage jobs for Rs 30 a day. And the village sarpanch Indubai Kolhale has dropped all pretence this year, taking up EGS road construction work for Rs 15 and five kilos of wheat or rice a day. "At least, there's some employment. We are eating dry rotis with salt water. It's like a curse, to be born in this village," she says.

The curse is not confined to Maharashtra. In Kerala, which has two monsoons a year and 44 rivers, drought has visited—and stayed—like never before. Successive crop losses are driving farmers to suicide. In the past seven weeks, 13 suicides have been reported from the spice hills of Wayanad. Mathew Thomas, 58, a debt-ridden farmer in Idukki, consumed a poisonous fruit and collapsed even as people watched on helplessly. In a note, Mathew said it was better to die than face the trauma of revenue recovery. As many as 300 farmers have committed suicide since April 2000 in the state. Kerala's major river, Bharatapuzha, features dry swathes along its entire course. Farmers now dig wells in the riverbed.

In Karnataka too, the story of drought is the story of suicides. The agriculture department says that nearly 700 farmers have committed suicide between April 2003 and March 2004. The government has disbursed compensation cheques to 195 affected families. For the deceased and their kin, there is no redemption even in an election year. Political speeches, even those given in drought-affected parts, skip it as if a bad omen. The few leaders who do, skirt around it, mentioning water with other resources and promising that the wretched situation will become better if they get elected. Says ncp chief Sharad Pawar: "Drought does not fit anywhere with India Shining, that's why it's not an issue. But wherever I have campaigned and spoken of it, people have responded hugely." An isolated incident perhaps, for forget the BJP and NDA, even the Congress campaign has been muted on the issue.

The lack of concern does not stop anyone from politicising the drought though. Take Andhra Pradesh, where drought has hit many districts. Aware that it could be a decisive factor in the elections—adding fuel to any anti-incumbency wave—CM Chandrababu Naidu had pushed for a pre-summer poll. But the Election Commission didn't oblige. Karnataka chief minister S.M. Krishna called a meeting of all secretaries and district commissioners to tell them: "There should be no delay in either releasing funds or executing drought relief works. Even if it means not going for your morning walk or playing tennis, the first thing you should do every morning is take stock of the drinking water scenario in your district."

Other state governments, particularly those ruled by non-BJP parties, have made the Centre's paltry drought assistance a saleable political issue. Maharashtra CM Sushilkumar Shinde rued that the Centre had parted with only Rs 72 crore when he had demanded Rs 400 crore. The Congress-led UDF government in Kerala had asked for Rs 2,880 crore. It got Rs 49 crore, "peanuts" as UDF convenor Oommen Chandy put it.

Many compare this year's situation in Maharashtra to the crippling drought of 1972. Says K.S. Vatsa, relief and rehabilitation secretary: "The drinking water problem is bigger this time. We are eight months into relief work but I still won't claim to be on top of the situation." That even high rainfall areas like Kerala and Meghalaya, or better irrigated areas like Mysore and western Maharashtra are reeling under drought is testimony to the poor, shoddy or vested interest-driven resource management.

In Anantpur, AP, there are few people left to tell the story. In Bhilwara district, Rajasthan, people from 172 villages in Asind and Raipur have migrated. If drought brings unemployment, migration for jobs brings with it a new set of problems—like low wage rates, temporary and unhygienic living conditions, little security for the womenfolk, lack of schools for the children and so on.

The most lasting impact has been on water availability itself. There's little water in the land, less for the cattle or the people. When the per capita availability in Kerala is as bad as in Rajasthan, imagine the situation in the rest of the country. In Jejuri, Maharashtra, they are even composing a hymn to the rain god, praying for water. If only the gods are kind, and the vote-seekers would take heed.