International pressure and the prospect of another winter in the trenches dictate India's decision to 'redeploy' troops. More Coverage 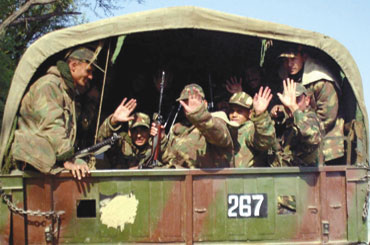 You see, in diplomacy they say you should always keep the door a little open but here we are being taught a new form of diplomacy. Slam the door shut and now ask the other side to please open the door for us. Why should I open the door for you? You slammed it shut. You open it.
—Pakistan President Pervez Musharraf, in an interview to The Hindu, April 1, 2002

The question of de-escalation comes last. Why did the need for deployment arise in the first place? To stop infiltration.... Only after correct verification that infiltration's stopped and terrorist camps across the border...dismantled, steps leading to de-escalation can be considered.
—Prime Minister A.B. Vajpayee, responding to a question in Almaty on June 5, 2002

A week before Atal Behari Vajpayee left for Copenhagen for the EU summit, Indian diplomats and their counterparts in the European Union couldn't agree on the language of the text relating to terrorism, Kashmir and Pakistan. As diplomats wrangled bitterly over the semantics and more, it was obvious to many that the number of...