Pakistan won't spare Kashmiri nationalists too, as Lone's murder proved, if they opposed the state's merger with it. 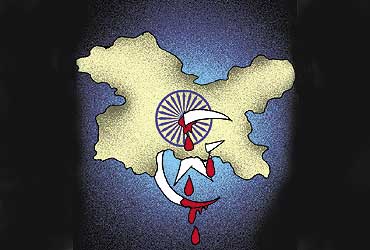 Terror is in fact the leitmotif of everyday life in Kashmir. General Musharraf and his glib foreign office spokesmen miss no occasion to tell an ignorant and uncaring world that Kashmiris live in terror of the Indian security forces which regularly kill innocent civilians and molest their wives and daughters. What he doesn't tell them is that his irregulars—Pakistani jehadis and the Kashmiri Hizbul Mujahideen—have also sought to 'liberate' Kashmiris from the cruel Hindu yoke through brute terror. For 13 years, anyone with influence who has worked towards a goal other than Kashmir's secession from India and merger with Pakistan has become a target for elimination.

The figures maintained (with perhaps a little under-reporting) by the Kashmir and Indian governments tell their own story. Of the over 32,000 people killed between 1989 and the middle of this month, 4,500 were security forces personnel, 14,000 were militants (more than 2,000 of whom were non-Kashmiris) and a little over 3,000 were civilians killed in 'crossfires' between militants and the security forces (often an euphemism for revenge killings by security force members who went berserk after sustaining casualties in an ambush). However, 10,200 were Kashmiri civilians killed by their Pakistan-backed "liberators". Of this, 1,200 were Hindus. The remaining 9,000 were Kashmiri Muslims.