With Allah On The ­Loudspeaker 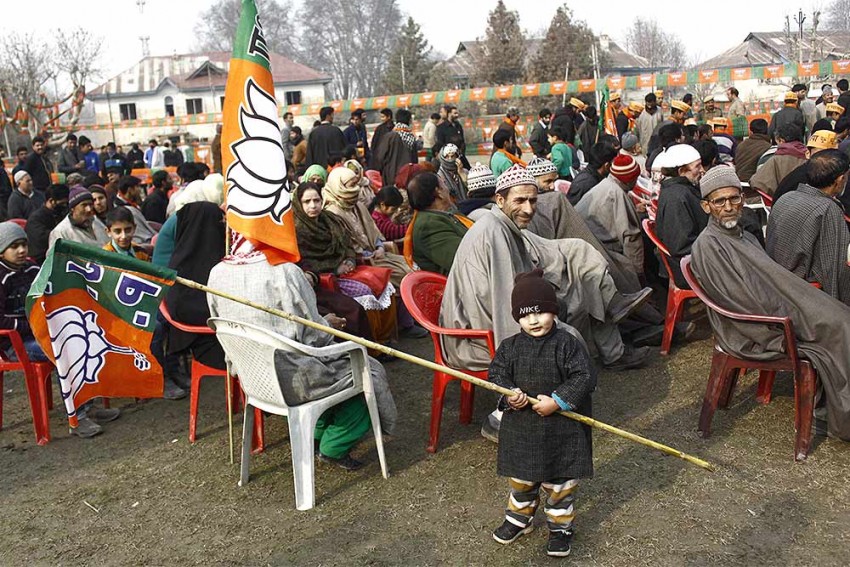 Photograph by Getty Images
Naseer Ganai January 04, 2018 00:00 IST With Allah On The ­Loudspeaker 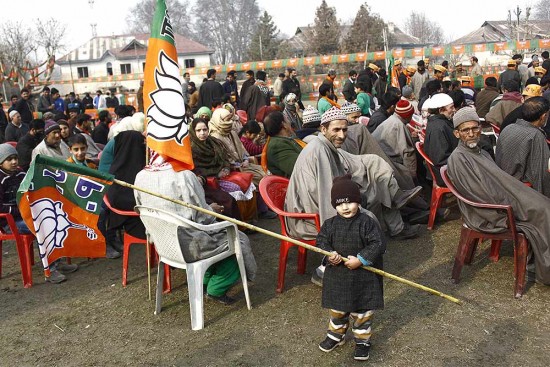 On December 17, just a few weeks after the killing of BJP’s Shopian district youth president Gowhar Ahmad Bhat, ­another district leader of ­India’s ruling party, its Budgam ­district president Ghulam ­Hassan Khan, is on the main road of his native Ichgam village, talking to villagers without any security cover. All around are numerous banners made of green cloth with Islamic sayings written on them. It’s a Sunday, and the locals are still celebrating Prophet Muhammed’s birth anniv­ersary, Eid Milad-Un-­Nabi, which was on December 2 this year. “We celebrate it the entire month,” says Khan, who was a soldier in the Ind­ian Army and later a militant, before joining the Congress first and then the BJP. Since his party colleague Bhat’s death, the government has been providing security to all prominent BJP leaders. Bhat, a 30-year-old health department emp­loyee, was found dead with his throat slit on Nov­ember 3, a day after he was ­abducted by militants from a government hospital in Shopian.

The abduction and killing struck fear among local BJP leaders in Shopian and other parts of south Kashmir, making many of them choose to stay in summer capital Srinagar. Bhat’s kin refused an interview saying they want no more media exposure. At Ichgam, though, it’s a different story. Khan is not afraid and his personal security officer was not with him when Outlook met him. On December 15, a ­meeting of BJP workers in Bandipora began with cries of ‘Allah-o-Akbar’ (Allah is great).

“I was in the army for 11 years and took two bullets while serving in Doklam in the 1980s,” says Khan. “I took voluntary retirement in 1984. Now, I am above 60. As death is in God’s hands, I don’t make a fuss about security.” As he walks ­towards his one-storey home, around 400 yards from the main road, he talks about the village, saying it has a mixed population of Shias, Sunnis and some Kashmiri Pandits. Pointing towards two mosques, he says, “A Jamia mosque is coming up adjacent to the Shia mosque. There is a temple in the main market. We all live together peacefully.”

Khan was making ends meet as a ­poultry farmer when the Valley was shaken by full-fledged armed insur­gency in 1990. On the advice of a politician, he joined some little-known militant group. “Otherwise, as a former Indian soldier, no Kashmiri would have trusted me in the 1990s,” he says. Not long after that, he says, he joined the Congress and started living in a Srinagar hotel with security cover like hundreds of other surrendered militants. Over the years, he went up the ranks to become a local leader of India’s grand old party. “Then, in 2014, I was persuaded by the BJP’s Kashmir in-charge, former IGP (Kashmir) PS Gill, to join his party,” says Khan. “Unlike the Congress, the BJP is not wily; what’s on its mind is also on its tongue. In Budgam alone, at least 4,000 people have direct links with the BJP.”

Khan says local BJP leaders are perturbed more by their party’s stand on abrogating Articles 35(A) and 370 of the Indian Constitution than its other aims or policies such as building a Ram temple in Ayodhya at the site of the Babri Masjid, which was torn down by Hindutva zealots in 1992, or opposition to what it calls ‘love jehad’ (Muslim men marrying Hindu women, who convert to Islam thereafter), or its stand that lynchings of Muslims in the name of cow-protection are isolated incidents. The party, in fact, has cultivated a different profile in the Valley, wary of playing the Hindutva card as aggressively as in the rest of the country. No wonder its local leaders talk as if there is little difference between the BJP and the Congress. “The BJP welcomes even Muslim clerics into its fold,” says Khan.

Whether clerics join the BJP or not, one difference is clearly visible between the BJP in the Valley and the party elsewhere: no BJP programme in Kashmir starts without Islamic slogans rending the air. On December 15, in north Kashmir’s Bandipora, a meeting of BJP workers began with cries of ‘Allah-o-Akbar’ (Allah is great). The words had been heard earlier too, at the first BJP youth workers’ rally in Srinagar’s Sher-e-Kashmir stadium, on October 22. That day, as the Bharatiya Janata Yuva Morcha (BJYM) president Poonam Mahajan started waving at the workers, a youth leader shouted ‘Allah-o-Akbar’ and nearly 3,000 others joined him, making the rally resemble a Muslim religious gathering more than a BJP meeting. Later, ‘halal’ biryani was served to the workers and leaders.

While Kashmiri Muslims joining the BJP is being viewed in certain quarters as an attempt by some persons to be close to the powers-that-be, the local leaders themselves try hard to provide an ideological justification for their choice, arguing they have convinced the party to change its outlook on Kashmir. “Our national leadership and the RSS are aware that the BJP’s Muslims workers are taking bullets for the party and the country in Kashmir,” says Hina Bhat, who contested the 2014 assembly polls from Amira Kadal on a BJP ticket and lost. For some time even after joining the BJP, she used to say she would pick up the gun if Article 370 is removed. “Not anymore,” she says, smiling.

Unlike Khan’s house in Budgam, an elaborate security arrangement is in place outside Hina’s residence at Rajbagh. A security guard first enquires whether a visitor has prior permission and only on getting the nod from the BJP leader on phone is the visitor ­allowed into the house after thorough frisking. Framed artworks based on Quranic calligraphy hang from the walls in the room where she meets ­visitors. “I am Muslim and the BJP is not anti-Muslim,” she says. “The party is the political wing of the RSS, which is doing a lot of work and finding acceptance in the Valley. Senior RSS functionaries visit the Valley every month and interact with the workers.”

Hina describes the lynching of Muslims in the rest of India as “an aberration, which no government is encouraging”. “I have never faced any discrimination in the organisation because of being a Kashmiri Muslim. We are being heard and our grievances are being addressed. The RSS trusts us. It is just like the Jamaat-e-Islami, but doesn’t believe in violence. We are for peace. The party has a democratic set-up within and believes in the efforts and dedication of workers. It instils discipline in us.”

Hina’s claim that the RSS is becoming more and more acceptable in the Valley is corroborated by other BJP INS­iders. The RSS has eight shakhas in the Valley, all headed by Kashmiri Muslims. According to BJP sources, senior RSS leader Ramesh Pappa led a meeting of the eight shakhas, comprising 32 ­executive members, in Srinagar on December 2. 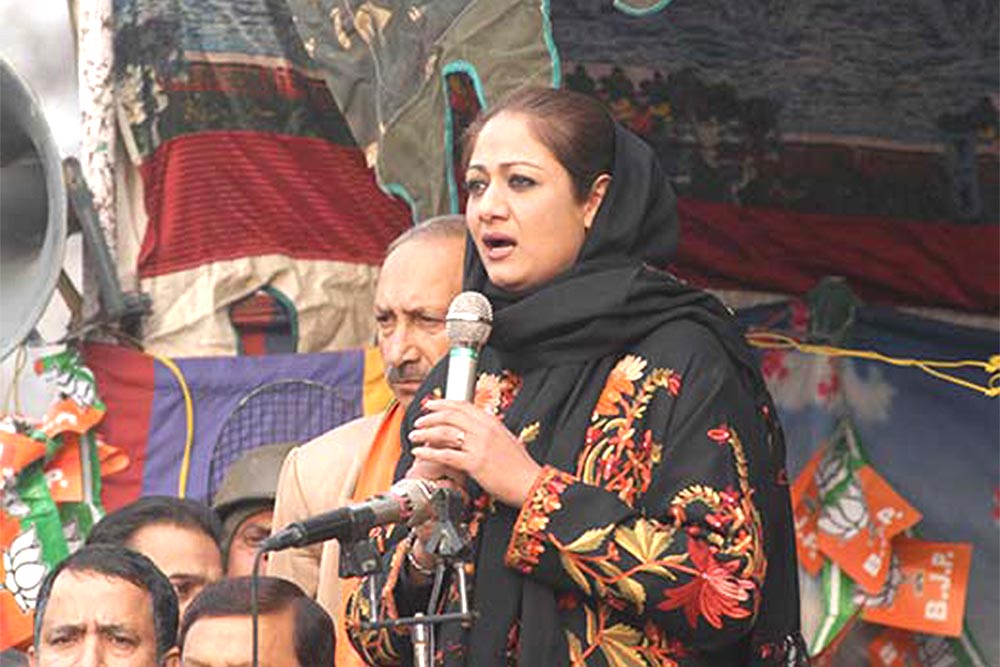 Hina Bhat is the BJP’s most popular Kashmiri face

Analysts say the BJP has never faced the kind of hostility the Congress ran into when it entered Kashmir in the 1960s.

On being asked how Kashmiri Mus­lims manage to work for a party that seeks “complete integration” of Jammu and Kashmir in the Indian Union, Hina brushes aside the question and says, “A Kashmiri Muslim has more acceptability in the RSS. Over the past three years, the RSS has been seeing a different kind of Kashmiri—someone who identifies as an Indian, while being particular about preserving his identity at the same time.”

Meet any BJP leader in Kashmir and the conversation almost invariably starts with the “development agenda of Prime Minister Narendra Modi”. Take, for example, the in-charge of the BJP women’s wing in Kashmir, Neelam Gash, who says women and youth are joining the party for development and peace. “We have 1,500 to 2,000 women workers in Kashmir, spread across the various districts,” claims Neelam, who was associated with the Congress’s youth wing earlier. On the very day she joined the BJP in 2014, she got a ticket to contest from Zadibal assembly constituency. Pointing out that she never feels like an alien in the party, she says, “You know, at times, we start our meeting with a recitation of the holy Quran. In our party, there is no discrimination on the basis of religion.”

The BJP’s media secretary in Kashmir, Altaf Thakur, calls himself an Indian nationalist and accuses the National Conference, the People’s Democratic Party and the Congress of having created a fear psychosis about the BJP in the Valley. “That perception about the BJP has changed only in the past three years. In fact, the BJP is keen to hear from Kashmiri Muslims,” says Thakur, who believes his idea of India and his idea of Kashmir were in no way different from the BJP’s. “The two ideas complement each other and my being Muslim makes no difference.”

While analysts are sceptical of the BJP’s claim of having crossed the four-lakh mark in terms of the number of members in the Valley, they also admit nobody can stop the party from making inroads. They say the BJP has never faced the kind of hostility that the Congress ran into when it entered Kashmir in the 1960s. “The Congress had imprisoned Sheikh Abdullah. It was the most hated party as Sheikh was its opponent and he was ruling Kashmir, whether officially in power or out of it. Such was the hostility that no one would marry into a Congress worker’s household,” says a Congress leader req­uesting anonymity. “In contrast, it has been a cakewalk so far for the BJP in Kashmir. But, let’s not forget, the Congress has not improved its tally in the Valley even after six decades. It continues to be an outsider. Electorally speaking, I don’t think the story would be very different for the BJP.” Thakur, however, sounds confident that the BJP will have some surprise for the Valley. “Be ready for it,” he says.

By Naseer Ganai in Budgam & Srinagar