Ever since Karnataka chief minister B.S. Yediyurappa assumed office in May 2008, most of his cabinet colleagues have made news for all the wrong reasons 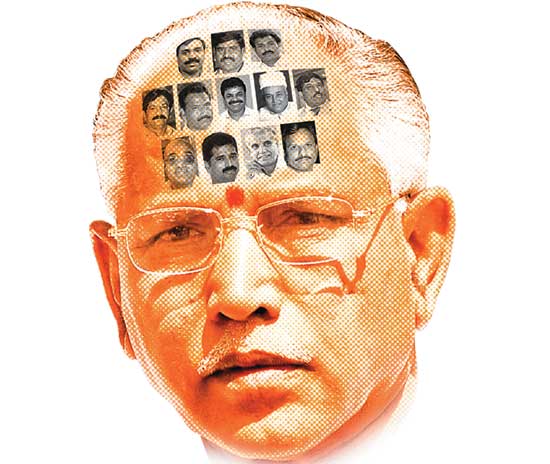 Ever since Karnataka chief minister B.S. Yediyurappa assumed office in May 2008, most of his cabinet colleagues have made news for all the wrong reasons. Some were forced to put in their papers. Some stayed put despite the charges and some were dismissed after the recent rebellion. Here then are Yeddy’s controversial gang of mantris...

B. Sriramulu
Health minister
An associate of the Reddy brothers with serious criminal charges against him.

B.N. Bachche Gowda
Labour minister
Was involved in a case of road rage. Publicly beat up an industrialist but refused to apologise.

Krishna J. Palemar
Ports & Environment minister
Triggered the resignation of Lokayukta Santosh Hegde when he recommended suspension of a whistleblower after iron ore went missing from Belekere port near Karwar.

M.P. Renukacharya
Excise minister
Appointed as minister despite being accused of sexual harassment by a nurse. Joined hands with the Reddys and rebelled in 2009. Now too a rebel.

Katta Subramanya Naidu
IT, BT and Housing minister
Charged by the Lokayukta in the Karnataka Industrial Areas Development Board scam

S.N. Krishnaiah Shetty
Housing and Muzrai minister
Quit in June 2009 after being implicated in a land scam