The Ambani battle goes to the political arena. Will netas resolve what the brothers can't? 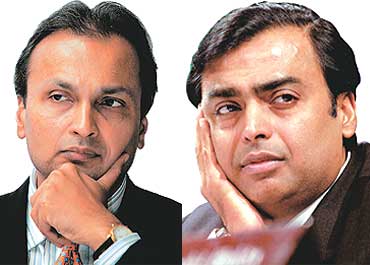 Who Stands Where In The Ambani Battleground

Dr Manmohan Singh, Prime Minister
Neutral, meets both brothers but conveys the impression that he wants to keep a distance from commercial interests

Sonia Gandhi, Congress president
Leans towards Mukesh, but Anil too has now managed to open a line of communication with her

Pranab Mukherjee, Union external affairs minister
Father figure to both, currently partial towards Mukesh but will not actively move against Anil

Sharad Pawar, Union minister for agriculture
Close to both brothers; has tried mediating between them in the past