Will She, Won't She?

Benazir has the means. But a will to oppose Musharraf... 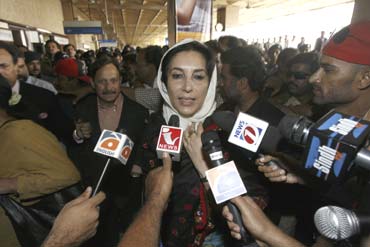 Hours after the Emergency, Benazir was back in Karachi, issuing statements against the suspension of the Constitution. So, is she willing to oppose Musharraf? Or will she continue her political minuet, much to the confusion of everyone around? Her stance is important because her party has the capacity to mobilise people, especially as Nawaz Sharif is away in exile.

The swarm of people Benazir attracted on her arrival in Pakistan should have emboldened her to plough a furrow independent of Musharraf. Yet, she has her own worries. Ideally, she would want the Supreme Court to uphold the National Reconciliation Ordinance that grants amnesty to those accused of corruption. Not only will her 'sins of corruption' be washed away, she won't have to endure harassment in courts, a card the Musharraf regime could always play against her. Is she willing to risk Musharraf's wrath?