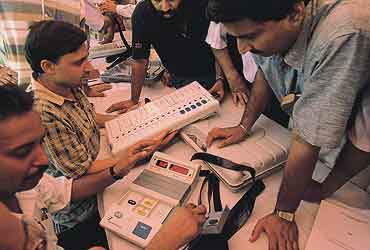 outlookindia.com
-0001-11-30T00:00:00+0553
Are Electronic Voting Machines (EVMs) tamper-proof? Can election results be "managed" in constituencies where margins are wafer-thin? Can these machines ensure voter anonymity in communally volatile areas? These are some of the questions raised by election watchdog bodies even as the Election Commission braces up to put a record 10.75 lakh EVMs in operational mode across the country.

There is cause for concern because of the many instances of "collusion and coercion" noticed by watch groups in the assembly elections in Rajasthan, MP and Chhattisgarh held late last year. Eyewitness accounts suggested then that "disgruntled and partisan" state employees in several regions, particularly in Rajasthan, made all the difference in constituencies where the two rival political parties, the BJP and Congress, were neck and neck.

Presiding officers in various booths were seen 'guiding' voters on how to push the button casting their vote. In doing so, the officers themselves would push a button and ask voters, queuing up, to follow suit. This was amply evident in Pithhalpur in Neem ka Thana constituency, Rajasthan. Ditto in Radawas in the Bairath assembly segment. The excuse: government staff manning booths were demonstrating how to use the unfamiliar EVMs. Many voters were told they had already voted after they heard the sound of the EVM being reset by presiding officers. Saumya Kidambi of the Mazdoor Kisaan Shakti Sangathan (MKSS) points out that "as government employees were going in buses for poll duties, they were shouting slogans like, 'Poll duty pe jaayenge, BJP ko jitayenge'." In several constituencies in Rajasthan, it was noticed that polling registered a sudden jump within a couple of hours of closing time when all the while it was low or moderate.

Gullible voters were taken in in other ways too. Says Rajeev Ranjan of Election Watch, "In Katni and Siwaani districts of MP, we heard complaints from huge chunks of voters that they were asked to press the fourth button only on the EVM. The other buttons, they were told, would give them a jhatka (electric shock)." Other illiterate voters were told only the first button was operational and any others, if pressed, would invalidate their vote. Bibhu Mohapatra of the Association for Democratic Reforms says had it not been for vigilant election groups and the help of the chief electoral officer, K.K. Chakravarthy, large blocks of voters in the Chhattisgarh tribal belt of Sarguja, Bastar and Dantewada would not have cast their vote. Says Mohapatra, "Voters were told by vested interests that since there was a power cut, casting their vote would make no difference. It would all be wiped out."

Unlike the earlier system where ballot papers are mixed, the EVM does not keep the voter's choice a secret. So it can be easily ascertained which way a particular booth voted. "Given the polarised climate in many constituencies, the vulnerable, poor sections risk a backlash if a candidate discovers, after the elections, that they voted against him," says an activist of the Citizens Committee for Verifiable Voting.

The EC, on its part, dismisses these allegations. Says A.K. Jha, deputy election commissioner, "There is a fundamental difference between the machines used in America and India. In the US, there is a software code written by private parties and the machines are centrally processed. In our machines, the programme code is fused into a microprocessor chip. Each machine is an independent, stand-alone unit and cannot be hacked." Each EVM is also fitted with a 'decoder' which gives the sequence of votes cast and can be summoned by the court if a candidate files a petition alleging discrepancies. Ex-chief election commissioner J.M. Lyngdoh maintains "the machines are tamper-proof but the EC has to educate voters to be more vigilant".In fact, the EC is mounting a major campaign to educate voters with the help of watchdog groups.

CEC T.S. Krishnamurthy also announced in Calcutta on March 17 that 50 per cent of polling staff would be brought from outside the state to break party affiliations among government staff. How far this move will ensure free and fair elections will be put to test soon.