It’s a cause that can’t go unsupported. All the more reason it shouldn’t be simplistic. 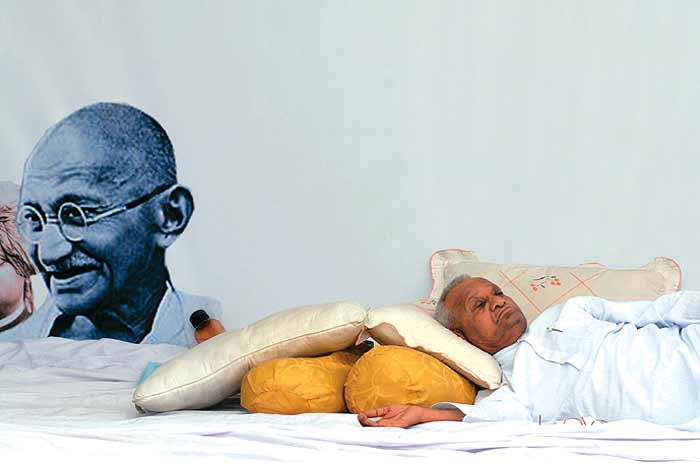 A Man & His Mission

There was music and an air of expectancy as the numbers swelled by the hour. On the morning of April 7, a group of women, all dressed in purple sarees, arrived at the venue like a bright wave. They were teachers from Salwan Public School, New Delhi, and had heard of the diminutive figure from Maharashtra fasting to fight corruption and had come to lend their numbers to his voice. Ex-servicemen, teachers, students, doctors, software engineers, housewives, transport association members—they were all there too. Some fasting, others taking turns to protest as Anna Hazare’s passive resistance to corruption entered the third day at Jantar Mantar. The protest had already acquired a momentum of its own.

The young and the old were there in numbers. So the New Age ‘Alt+Ctrl+Del’ placard easily blended with ones saying ‘Divided by Politics, United by Corruption’ and ‘If you want our vote, bring in the Lok Pal Bill’. Even the policemen posted there said it was the right of every citizen to protest against corruption. “Annaji jo kar rahe hain, theek hi to hai (What Annaji is doing is quite right, after all),” said Dinesh Yadav, a constable with Delhi police. He said the protest was legitimate and long overdue.

As the numbers swelled, the government looked rattled and appeared to be buckling under pressure. The protesters claimed their first scalp when Union agriculture minister Sharad Pawar stepped down from the Group of Ministers (GoM) looking into the vexatious Lokpal Bill, which had already taken more than 43 years in the making. Pawar quit after Hazare asked how a corrupt person could be on the GoM. 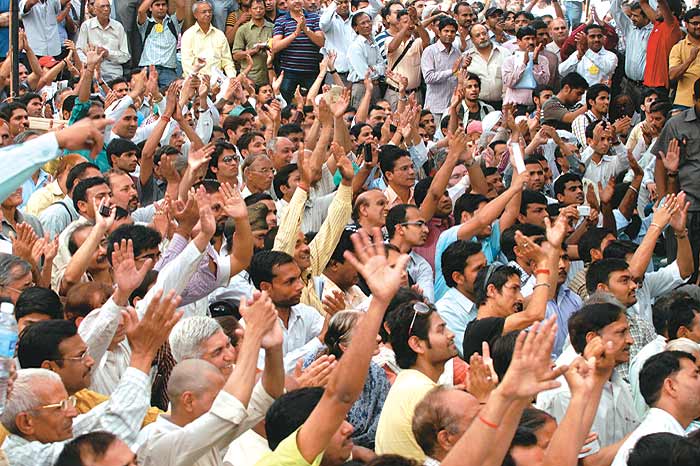 As this report went to print, the UPA’s pointsperson and Union minister for hrd and telecom, Kapil Sibal, met ex-IRS officer and activist Arvind Kejriwal, who helped draft the bill with senior advocate Prashant Bhushan and Karnataka Lokayukta Santosh Hegde. On behalf of the government, Sibal requested Hazare to end the fast and gave some reassurances to the agitators on their demand for a joint committee (with 50:50 representation of civil society and government) to deliberate on the bill. Later, Congress president Sonia Gandhi appealed to Hazare and asked him to give up the fast. “I’m sure Hazareji’s views will receive the government’s full attention,” she said. On the specific demand for Hazare to chair the committee, the government had refused on April 7. But there were still some sticking points. The government’s refusal (on April 7) to formally notify the committee, thereby giving it legal stamp, or to even set a time-frame for deliberations, gave more reason for the agitators to dig in their heels. But Sibal talked of finding a solution the next morning.

Hazare’s supporters want civil society to have a strong presence on the panel drafting the Lokpal bill.

For the 73-year-old Anna Hazare, the man unifying, in a way, middle-class disenchantment with corruption, and his followers (including two doctors from Mumbai who keep an eye on his health), the energy at Jantar Mantar was an all too familiar sight. A veteran of protests, Hazare’s power to attract crowds for a cause is undisputed. “He can go on for the next fortnight just on water, but given his age we are keeping a close watch,” said Dr Praveen Sharma, a neurosurgeon from MGM Hospital. In three days of fasting, Hazare had lost a little over a kilo, and his blood pressure was of concern, but Sharma, who was himself fasting, said water and a strong mind are enough to take on the might of the state. Sharma, with a bottle of fresh water by his side, also carried out random health check-ups of people who stopped by.

Mumbai, the city that has no time to pause, captured the public mood best through pithy slogans. As Hazare began his fast-unto-death on April 5, out came banners, posters, placards and headbands saying: ‘I support Anna Hazare’. Azad Maidan, the epicentre of many a movement in Mumbai, witnessed the unlikeliest of protesters as the lines between Hazare and the government appeared to harden: doctors who put aside their practice for half a day, young techies who braved their BPO bosses’ ire to be here, a handful of young men and women who quit their “boring call centre” jobs to participate in what they termed “our freedom movement”. Housewives dropped by, office-goers trooped in during lunch breaks, freedom-fighters joined in, enthusiastic activists carried a black coffin marked ‘Corruption’. The atmosphere of deep purpose was punctuated by songs of freedom and liberation. Medha Patkar was also there.

Most of those who came to Azad Maidan were handed out badges and banners. Day one saw about 25 deeply committed people start the Hazare-like fast. By the third day, the number had swelled to nearly 80. There were many who could not undertake a long-term fast, and instead expressed support through token one-day fasts. Adman Bharat Dabholkar, who sat for a day, said: “I am here as a citizen of India. I want a cleaner, better India, and a strong law against corruption.”

What had begun on Tuesday morning with bikers holding placards and banners, accompanied by a few cars draped with ‘India Against Corruption’ and ‘I support Anna Hazare’ to sensitise Mumbaikars, had turned into a visible movement of the aam janata. In a suburban local train, that veritable marker of Mumbai mood, middle-aged Archana Patil, travelling in the second class ladies compartment to Churchgate, said it all: “Everyone wanted to raise their voice against corruption, but everyone waited for a messiah. The messiah is here.”

That’s an epithet Hazare, and his closest followers in Ralegan Siddhi village, near Pune, are uncomfortable with. The rooms adjoining the Yadavbaba temple here have been Hazare’s address since he returned in 1977, quitting his job as an army driver. The 5,000-odd villagers here, whom he led to a self-sufficient and productive life through watershed development and anti-alcohol campaigns—the village itself was turned from a perennially drought-prone one to a water-surplus one in the 1980s—joined unanimously in the fast on April 5.

Pune and towns across Maharashtra—Thane, Panvel, Navi Mumbai, Nashik, Kolkhapur—saw a slew of protests and marches in support of Hazare and his cause. Mayank Gandhi, a member of the spearheading group ‘India Against Corruption’ said that 25 districts in Maharashtra had reported some agitation or protest on the issue in the first 48 hours.

Cutting back to Delhi. Hazare’s war cry against corruption encouraged Harpreet Singh, a doctor from Ludhiana, to take a midnight bus to Delhi. “I am tired of watching government hospitals turning down poor patients and just exhausted by all the corruption around me I see as a doctor. It’s time to at least start a movement against it,” he says. The 25-year-old had done a Google search on Hazare before leaving for Delhi. He says he’s going to be with Hazare till the finish. Singh doesn’t know the minutiae of the bill, but believes it holds the promise of addressing corruption. He is convinced that it has the power to give a redressal platform for people like him.

Kapil Sibal and Sonia Gandhi have made appeals to Hazare, saying his views on the Bill will be heard.

P.K. Ranjan, an ex-serviceman, added his voice: “The root cause of misgovernance is corruption, so that needs to be addressed first. The very least we can all do is to support this man.” Everyone was welcome at Jantar Mantar. Except politicians. Uma Bharati and Om Prakash Chautala were booed out. Kejriwal later clarified that Hazare had stated that there was no room for netas in a peoples’ movement.

As far as the fine print of the legislation goes, there’s no denying there were differences between Anna Hazare and the National Advisory Council (NAC), the set-up headed by Sonia Gandhi that acts as an interface between civil society and government. “It is natural that no two people will have the same view,” says Kejriwal. “We are not saying we have created the perfect draft. In fact, the draft is still open to discussion. Anna is only saying: ‘Create a platform for civil society in the committee to discuss the issue.’ Why should the government shy away from that?”

There were media reports that NAC member Aruna Roy had been deputed to find a solution. But Roy denied this and clarified that her voluntary group, mkss, supports Hazare’s campaign on corruption. Widening the ambit of discussion, she added, “Nine months ago, we talked about transparency at the pre-legislation stage and this pertained to all legislations enacted in the name of the people. It’s systemic reforms we are looking at.”

Ever since the fast began, the 40-odd OB vans parked at Jantar Mantar waited in anticipation of a breakthrough. In the heady cocktail of media and time-tested satyagraha, India has found a way to voice its ire against corruption. A human voice.

By Anuradha Raman in Delhi and Smruti Koppikar in Mumbai

Editor's note: This was written and published before the government announcement accepting Mr Hazare's demands.