Why Villagers Are Unhappy With UP's Jewar Airport Project

Uttar Pradesh government will be acquiring 1337 hectares of land for the proposed Jewar international airport in Gautam Buddh Nagar district in the first phase of the project. A total of 5926 families will be affected. 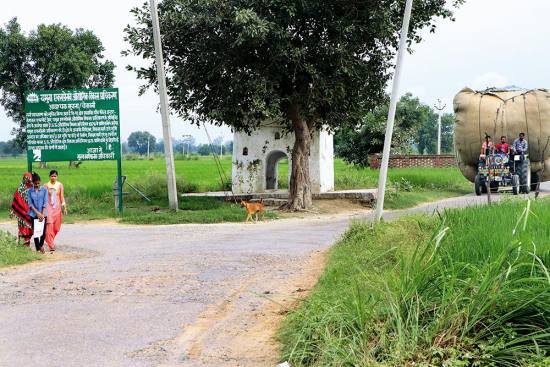 “I invested Rs 1 lakh on the bajra crop last month. But all this will be gone once land acquisition happens,” sighs Ashok Kumar, pointing to a lush green field. Uttar Pradesh government will be acquiring 1337 hectares of land for the proposed Jewar international airport in Gautam Buddh Nagar district in the first phase of the project. A total of 5926 families will be affected. Ashok’s 21-member household will have to leave their village Rohi and start life elsewhere. In the first phase, over 1337 hectares will be acquired from six villages, affecting 5926 families.. A total of 5,000 hectares have been earmarked for the Rs 15,000-20,000 crore project. The airport is ­expected to be operatio­nal by 2022-23.

Ashok was among the 200-odd landowners who submitted their consent to land acquisition last week, following hectic parleys by local MLA Dhirender Singh, who quit the Congress to join the BJP ahead of the 2017 ass­embly polls. The consent of these landowners was crucial under the Right to Fair Compensation and Transparency in Land Acquisition, Rehab­ilitation and Resettlement Act, 2013, which stipulates that at least 70 per cent of affected landowners must agree to having their land acquired before any acquisition takes place.

“The percentage of consenting landowners has crossed 75 per cent now,” says the MLA. “I made door-to-door visits for convincing villagers that the airport will bring development.” Rohi was one of the six villages that had been refusing to allow land acquisition for the project, which has been in the pipeline since 2001. The other five are Dayanatpur, Kishorpur, Parohi, Ranhera and Banwari Bas.

“The government has been sent the det­ails of the agreements and once it takes the final call, a notification for land acquisition will be issued...

Vikas Pathak / The challenge the Congress faces at present is it has to fight not just internal dissidence and the BJP but deal with anti-BJP regional parties, who are no longer seeing it as a viable ally.