Why Is Uma Upset? 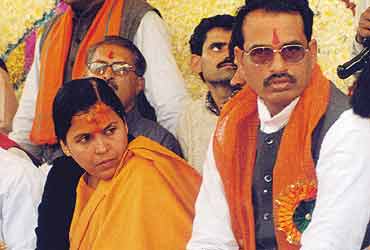 That's why Uma was livid and first refused to accept the post of general secretary. She demanded the power of veto over BJP affairs in her state. Advani refused but climbed down after RSS bosses and S. Gurumurthy intervened on Uma's behalf. She accepted the post of general secretary after five days only when Advani agreed to make her a member of a coordination committee for MP—the only state to have such a body.

One of Uma's main purpose in keeping a toe in MP is to block Shivraj's rise. He is just 45 years old, a fine public speaker, and a backward caste politician from a village in Vidisha from where he has won five consecutive Lok Sabha terms. Moreover, he is low-key, calm and rational. A very obvious threat to Uma.