Unlike the West, New Delhi suspects doublespeak in virtually everything President Musharraf says and does.
Free Speech: Your take 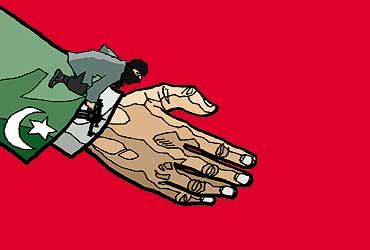 outlookindia.com
-0001-11-30T00:00:00+0553
In his State of the Union message, US President George W. Bush has once again showered extravagant praise on Gen Pervez Musharraf for having become a born-again foe of terrorism. To Indians this praise is passing strange, for it is being showered on him for what he says he will do and not what he is doing. Musharraf and his canny advisors have seized upon this to try and put India on the diplomatic defensive once again. Since his January 12 address to Pakistan, Musharraf has made two overtures to India to start withdrawing troops and resume talks on all outstanding issues, including Kashmir. India has spurned both overtures and test-fired the 750-km-range Agni-II in the bargain.

To the West, these actions have made India look increasingly unreasonable. But the appearance is deceptive. India has already responded positively to Musharraf's January 12 speech and it has done so not in words but through actions. In spite of possessing credible evidence that the terrorists who killed five policemen outside the American Center in Calcutta on January 22 were affiliated to the Lashkar-e-Toiba (LeT), New Delhi has carefully refrained from blaming the Pakistani government of complicity. Had the outrage occurred a month earlier, it could have pushed the two countries into open war.

The Vajpayee government remains unrelenting on the issue of troop withdrawals as it is neither convinced that Musharraf has any intention of curbing cross-border terrorism in Kashmir nor that the US will push him to do so as it did in the case of Al Qaeda. The decline in terrorist attacks in Kashmir is no greater so far this year than in previous winters. There are indications that fewer of them are fidayeen attacks but the change is not sufficiently marked for India to draw any firm conclusions from it. India will therefore have to wait till April to determine whether terrorism has indeed declined.

This is the main reason why New Delhi is insisting on the extradition of 14 Indian nationals accused of terrorist acts, who have been given shelter by Pakistan. If Pakistan were to comply, this would give New Delhi the signal it is looking for. But Musharraf has only said that he will examine the case for doing so. In the meantime, Pakistani newspapers have reported that some, if not all of the 14, have been sent out of Pakistan to Saudi Arabia and other destinations.

Unlike the US, New Delhi suspects doublespeak in virtually everything Musharraf says and does. Musharraf froze the accounts of three organisations declared terrorist by the US, the Jaish-e-Mohammad (JeM), the LeT and the Harkat-ul-Mujahideen, well before January 12. But the Pakistani paper, The News, reported on January 1 that two of these contained only $70 and $14. Bin Laden's own account, maintained by Ayman al Zawahiri, contained only $252.

Musharraf has banned the LeT and the JeM and placed their leaders under house arrest. But he has spared the Harkat-ul-Mujahideen and Al Badr Mujahideen, which have in recent months confined their terrorism to J&K.

Delhi's scepticism has been reinforced by the fact that the Pakistani government has banned the LeT and the JeM only in Pakistan proper and not in the parts of former Kashmir under its control. Even within Pakistan, the police has only closed down the regional and subordinate offices of the two organisations and not their headquarters in Lahore and Karachi. All this has reinforced the suspicion that Musharraf's main purpose is to herd the jehadis into Pakistan-occupied Kashmir (PoK) and allow them to operate against India from there.

This had been Musharraf's idea even pre-September 11. He had been urging the JeM and LeT to move their HQ to Kashmir for over a year. In July, the government arrested several JeM and LeT men in Sindh and extracted a promise to move to Kashmir before releasing them.

Preparations for the shift had been far advanced even in 'Azad' Kashmir, when the terrorists struck the US. In June last year, the president of the Muzaffarabad-based Kashmir Muslim Conference, Sardar Qayoom Khan, was forced to withdraw his candidacy for the presidential elections in PoK. His place was taken by Maj Gen Anwar Khan, who took premature retirement from the army in order to fight the elections. Anwar Khan used to be a deputy director of Pakistan's Inter-Services Intelligence Directorate and is a cousin of Gen Muhammad Aziz, Musharraf's former chief of staff, with whom he supposedly fell out in September 2000. Aziz was transferred as corps commander to Lahore. Not too many people know that this supposedly peace-time command was the nervecentre of the ISI's activities in Kashmir and Afghanistan.

Musharraf's attempt to link withdrawal of troops from the frontline to a comprehensive dialogue on Kashmir has further reinforced Delhi's belief that he is only biding his time. By April, when the snows melt and the passes open, he hopes to have convinced the West through repeated offers of a dialogue that it is India that is being totally unreasonable. Thus who can blame 'Kashmiris' if they take up the gun again?

Although Bush and Tony Blair have sworn till they are blue in the face that they make no distinction between terrorism to the west and terrorism to the east of Peshawar, the fact is that in praising Musharraf and, through their silences, criticising India, they are doing precisely that. The more they do this the more do they increase the chance of armed conflict. The threat of war that India unsheathed in December is the last weapon in its diplomatic armoury. If it fails, there will be left only the ultimatum and finally war itself. The more uncritical the West becomes in its support of Musharraf, the more will it encourage him to travel down the path he was already upon before December 11.