Why Fear A Hindu Rashtra?

India wouldn’t have been secular or democratic had we not been a Hindu nation. Why should some leaders of minorities fight shy of accepting it? 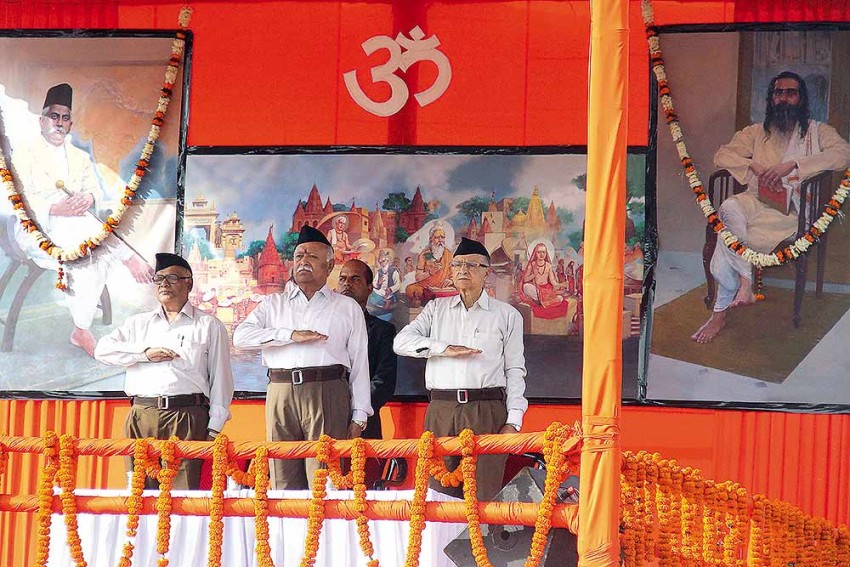 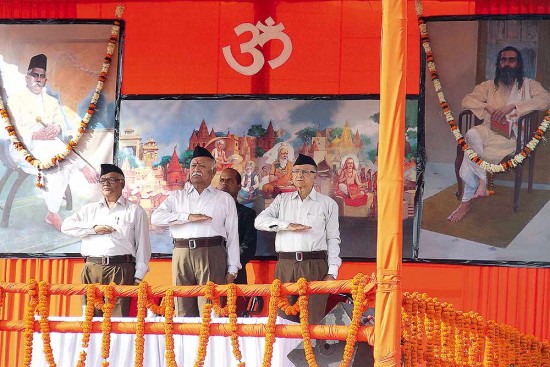 More than once, RSS sarsanghchalak Mohan Bhagwat has categorically made it clear that India is a Hindu rashtra, its identity Hindutva and that anyone living in the country is a Hindu, irrespective of one’s religion. Indeed, Hindutva is this nation’s lifeline—if history is anything to go by.

In fact, Bhagwat’s predecessor Balasaheb Deoras had attributed India’s Hindu-majority status to why democracy and secularism exist in the country. The coexistence of these two features eludes our neighbours who separated from India for historical reasons, he had said, citing Pakistan, Afghanistan, Tibet, Bangladesh, Sri Lanka, the Maldives and even parts of China, where minorities are being selectively annihilated. “Hence it is necessary to keep India a Hindu nation for the sustenance of various religious groups,” according to Deoras.

Many educated Indians got trapped intellectually when the British scholars, who, as part of their divide-and-rule policy, propagated that ‘Hindu’ denotes a religion. But eminent thinkers like Mahatma Gandhi and Dr S. Radhakrishnan have repeatedly made it clear that the word does not denote a religion, but is the name of an eternal culture. Gandhiji’s ideal of ‘Rama Rajya’ is not different from Hindu nation. There is no Hindu ‘religion’, but there can be Hindu ‘religions’. Religions are part of Hindutva, but not all of Hindutva. The concept of ‘ism’ is incompatible with a flexible Hindu spirit. So the term ‘Hinduism’ is self-contradictory and ‘Hindutva’ is the appropriate term. But some of our modern intellectuals skillfully cover up these facts and raise unsustainable accusation against Hindutva.

India has many enlightened Muslim-Christian leaders who proudly proclaimed that they are culturally and traditionally Hindus. Khan Abdul Ghaffar Khan, Justice Muhammad Karim Chagla and Justice K.T. Thomas are examples. A 1950 book, Five thousand years of Pakistan, which was approved by the government in Islamabad, also recognises its pre-Islamic Hindu cultural tradition. Yet, leaders of the Congress and Communist parties in India keep rejecting Hindutva—only to appease the religious minorities. Their formula: opposing the RSS means rejecting everything Hindu. Its end result was the failure of the politics by the Congress as well as the Left. After all, no people in any national society can for long keep rejecting one’s own identity and culture.

One major reason why Narendra Modi came to power was the extreme minority appeasement pursued by most non-BJP parties. While post-Independence India has a history of communal riots, they stopped in Gujarat after 2002, with Modi, who was known as a symbol of extreme Hindutva, in power. But such disturbances keep erupting in a state like, say, Uttar Pradesh. Why? It’s ruled by the so-called ‘secular’ parties, who make the state a laboratory of minority appeasement. It is these ‘secularists’ who are up in arms against Hindu rashtra.

Faraway, Europe has begun seeing religious activities of Muslims with distrust and is regulating them. Switzerland doesn’t permit new mosques; France has banned purdah. When Islamic leaders questioned these, one president asked them how they could claim the kind of freedom that Muslim-majority countries do not give to other religions. In India, some ‘intellectuals’ belonging to the Congress, Communist and other ‘secular’ parties propose the theory of ‘mixed culture’ or a ‘hybrid composite culture’—mainly to oppose the Hindu culture propounded by the RSS. Those who join hands with them don’t learn lessons from the tragic experience of the natives of America, people of Gaza or the Yazidis of Iraq. How can such a Semitic culture be mixed with ours that gives equal respect to all religions? The West continues with such acts that the modern civilised era finds difficult to cope up with.

Jawaharlal Nehru said “I am a Hindu by accident of birth”, while Marxist ideologue E.M.S. Namboodiripad once retorted to a journalist thus: “Who said I am a Hindu?” These are some of the proponents of the ‘mixed culture’. They are being corre­cted in ‘soft Hindutva’, followed due to political compulsions by later-generation politicians such as Rahul Gandhi (who has of late started visiting temples) and Shashi Tharoor who recently wrote the book, Why I am a Hindu. Tharoor begins his book by answering his own question following the Nehruvian intellectual legacy. He says: “Why I am a Hindu? The obvious answer to this question is, of course, that it’s because I was born one!”

Unfortunately, the leaders while shaping Independent India, lacked the vision that was cherished over thousands of years. They sometimes contradicted Gandhian visions. Our Consti­tution makers could not find a single name for our country, and added the dual name “India that is Bharat” in the beginning of the document on our guiding principles. They could not be unanimous on quite a few things; so we have Jana gana mana as the national anthem and Vande mataram as national song!

Hindutva should not be measured from words or deeds of some immature fanatics who react emotionally to issues. Hindus have traditionally certain unique and great specialties that no other society in the world can claim. Such as, equal respect for all religions, tolerance, freedom of religion, unity in diversity, quest for truth, scientific temper, principle of equality, non-violence, harmony and democracy. Any attempt to dilute such a culture with a ‘mixed culture’ is disastrous, and will lead to loss of our secularism and democracy. This is the lesson we learn from the history of the blunders of Nehruvian policy starting from the days of Partition and a turbulent Kashmir. Semitic intolerance damaged India, changing its course of history. 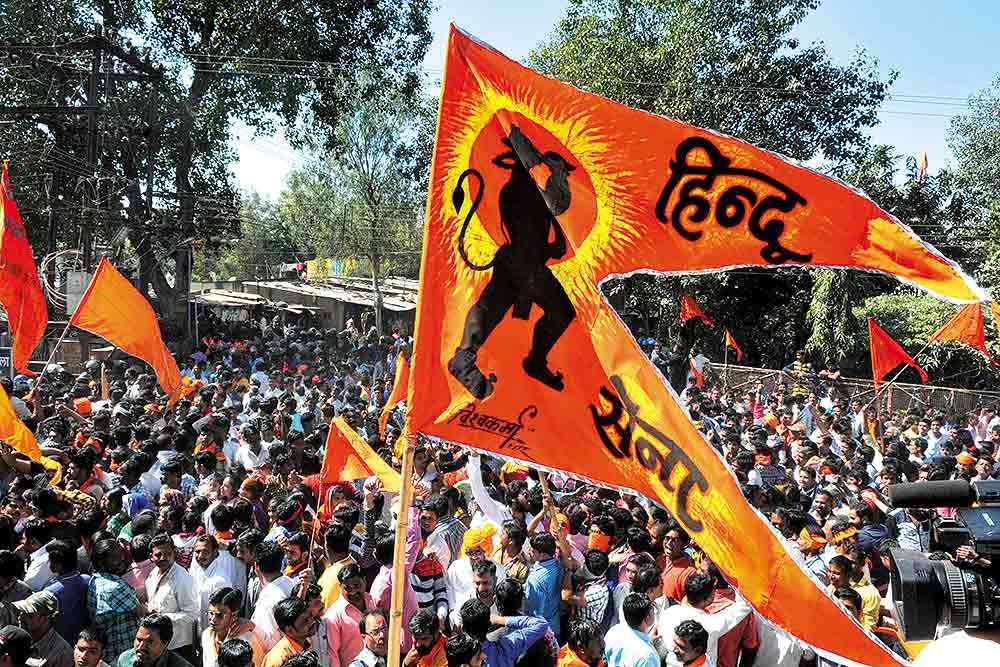 Photograph by Getty Images
Hindutva must not be measured from the words of immature fanatics who react very emotionally to issues.

About the earlier period of our nation, Swami Vivekandanda said at a Colombo lecture: “Here activity prevailed when even Greece did not exist, when Rome was not thought of, when the very fathers of the modern Europeans lived in the forests and painted themselves blue.” Rig Veda, the first literature of the world, proclaimed thousands of years ago our approach to different religions: Ekam sad vipraa bahudhaa vadanti. Meaning, ‘truth is one, scholars interpret it in different ways’. It also prayed in its gayatri mantra: Dhiyo yona pracho­dayat, meaning ‘instigate the intellect’. Why should some leaders of the minorities be shy of proudly accepting such a great culture and tradition while still following their religion?

Recently the Syro-Malabar Catholic Church in Kerala officially argued that yoga is against Christian principles. It is becoming a fashion among different religions to think that respecting cultural symbols and national heroes are against their religious beliefs. Such people have to learn from Indonesia, the world’s largest Muslim country. They proudly follow an ancient Hindu culture banking on the Ramayana. That epic is the main theme of their classical dance. Their currencies carry the pictures of Ganapati and other Hindu gods. The official bank of Indonesia is Kubera; official airlines is Garuda. They do not feel that their pride in Hindutva is against their religion. This is a lesson to minorities in India. (About the portions of an undivided India that converted into Islam, Vivekananda observes that those areas like Afghanistan, Pakistan and East Bengal that were converted into Buddhism could easily be converted into Islam. They have not thereafter witnessed anything like democracy, secularism, minority rights or even peaceful existence.)

There is no scope for any fear that Hindu nation will be a threat to other countries. We find in the history of western Semitic culture that whenever a nation becomes powerful, the first thing it does is to attack and conquer other countries. Hindu culture is diametrically opposite to this tribal mindset. If it was a mixed culture or a mixed nation, history would have been different. Our approach to other countries is theoretically explained by the ideologue Deendayal Upadhyay in his theory of Progressive Unfoldment of Consciousness. The individual consciousness has to expand to one’s family, then to society, nation, humanity and finally to the universe. A Hindu nation is capable of peacefully including all the comity of nations through its concept of ‘Vasudhaiva kutumbakam’ or global family. That is why, when Israel was formed in 1948, the Jews from India alone had a different story to say: of assistances and cooperation from a Hindu society. No different was the narrative of the Parsis who took asylum in India after they fled from native Iran. Forget about the behaviour of these religions to Hindus in return, can any other nation claim such a magnanimous history?

Anyone who has learnt the real history of India cannot hesitate to be proud of his Hindu cultural past, keeping one’s different religious faith. Followers of all religions living in India should be part of the national mainstream. All of us should prompt this Hindu nation to transcend national borders and embrace the whole hum­anity. It’s for that the RSS is relentlessly working. Spreading the concept of ‘One Nation, One people’ is necessary to address many of the iss­ues our national society faces today. Diversity is the beauty of nature, but it should relate to an underlying unity. Anyone who respects the specialities of this culture is a Hindu. The Hindu rashtra belongs to them.

(The writer is national president of the Bharatiya Mazdoor Sangh.)

‘I Am Bound To Get The Working Majority’