Why Do They Say That Modi Hates Nehru?

Why indeed, for hate is intensely personal. Nehru’s new republic, with its measly material portions, provided the propulsive agents that made him. 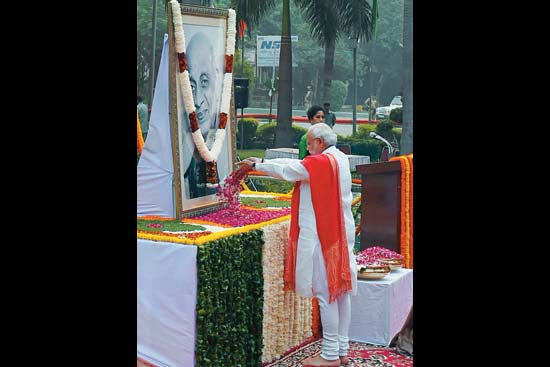 As the impending birth anniversary of Jawaharlal Nehru would be his one hundred and twenty-fifth, a number divisible by twenty-five, there would be some fuss about him over the next week. There would be talk about ‘institutions’, because when Indians of a type speak of Nehru they usually mention ‘institutions’, just the way they use ‘comparisons’ and ‘odious’ in the same sentence. It is inevitable that there would be some talk about how much the fifteenth prime minister of India, Narendra Modi, loathes India’s first.

Nehru’s world was framed in English. He was the mild bore writer, the sophisticate who could talk western culture to western culture, the atheist who found it easy to ask believers to be secular. Modi, on the other hand, the temple-goer, ham, and the only man at Barack Obama’s dinner whose elbows were on the dining table. It does look as though Modi is the anti-matter of Nehru, but does he have reasons to hate Nehru as is generally believed? A vague contempt, probably, but hate needs deep personal reasons. Even when it is couched in ideological outrage, hate is fundamentally personal. That is the nature of hate.

Can a contemporary Indian hate any of his historical figures, that too a man who was not psychotic, who did not order a genocide, who did not plunder the nation, but was merely wrong about a few things, and wrong in hindsight?

Modi, who was born in 1950, has made it very clear that as a boy growing up in Gujarat, when Nehru was prime minister, he learnt to hate the Congress because, according to him, that was the sentiment all around. In his biography by Nilanjan Mukhopadhyay, Modi is quoted as saying that a significant memory of his childhood involves “the strong hatred towards the Congress which was prevalent at that time became part of me. I think it impacted even the mind of the child.... People had a tremendous dislike for the Congress.... People used to campaign, burn effigies and as a child I did try to understand why people were so angry. So I asked the elders why they were burning the effigies and they said that the Congress had done something wrong—had done harm to us.”

It was not a majority view in Gujarat, because the Congress was in power in the state from the time of its formation in 1960 till 1995, but it appears Modi’s community and neighbourhood hated it, and by that extension Nehru perhaps, or probably Nehru was the reason they disliked the Congress. But it was a hatred that was fed to a boy. Surely, as Modi grew up he found his own reasons. Among the major reasons that people point to is how the Congress appeased and politically empowered the Muslims. But is that a convincing reason for him to hate Nehru, as people suggest? Even if he did at some point in his youth, can Modi, the middle-aged prime minister, claim he does not see the wisdom in Nehru’s idea of India as a religion-neutral State?

Modi told his biographer, Mukhopadhyay, long before he became PM, that “people often confuse ideology with programmes. The programme is not ideology, and ideology is not a programme.... How can we reach the goal now without a two-thirds majority, how can we abrogate Article 370 (which grants special status to Jammu and Kashmir)? So we have to first find ways of getting two-thirds majority.”

Modi has found the way, almost, but there is no evidence to suggest that he is interested in the ‘abrogation’ of Article 370. Rather, it appears that he wants to set in motion a process that would lure Kashmir to India.

To imagine Modi seething at Nehru for diminishing Patel is amusing. It’s not a given that Modi has personal heroes.

How can Modi hate Nehru when he is reluctant to overturn that man’s central ideas, or even his mistakes, as Modi has sometimes interpreted the ideas? The ‘institutions’ that Nehru built, especially scientific and educational, appear to be very dear to Modi. Even when Modi announced the death of the Planning Commission, he did so with respect:  “I believe that when the Planning Commission was constituted, it was done on the basis of the circumstances and the needs of those times. In recent years, the Planning Commission has contributed to the growth of the country in its own way. I respect that, I am proud of that, but the prevalent situation in the country is different....”

Some point to the rivalry between Nehru and Vallabhbhai Patel, Modi’s apparent hero, as another reason why he has disdain for Nehru. People do hate the arch-enemies of their heroes. People hate Gandhi because they love Ambedkar, or they love Subhas Chandra Bose, or for that matter hate Sachin Tendulkar bec­ause they love Sourav Ganguly.

But then, despite their squabbles, by the standards of male rivalries, Nehru and Patel come across as mutual admirers. Patel’s finest qualities have been best expressed in Nehru’s words. Also, let’s be honest. To imagine Modi seething privately at Nehru for diminishing Patel is somewhat amusing. It is not a given that Modi, in reality, has any heroes.

Is it possible that Modi blames Nehru for his own, proclaimed poverty in his formative years? After all, Nehru’s disrespect for commerce, his phoney and confused economic policies and his almost criminal neglect of primary education and healthcare marinated most of India in poverty while enriching a few. But first an elementary question: Was Modi poor?

Even though Modi has marketed his tea-selling act very well, he was not as poor as he has made himself out to be. He was without doubt from a modest background, but he was more fortunate than most Indians, especially in the ’50s and ’60s. Modi, from all evidence, was from a provincial, middle-class background. He lived in a small home that his family owned, he never starved and he had access to education. A bitter childhood longing that he talks about in his biography concerns the wish for electricity, which even the wealthy of Vadnagar did not possess.

But the important question is that as a boy raised in a small town in Nehru’s new Indian republic, what would have become of Modi if he had not sought refuge in politics? Exactly what became of almost anyone of his generation who was not rich, connected, proficient in English or highly educated. Modi would have amounted to nothing much. But then he can only thank Nehru for providing him his circumstances. Modi’s provincial life, and meanderings through Hindu nationalism, are in the very core of his personality. For Modi to hate Nehru for his social circumstances is to hate himself.

(Manu Joseph is a journalist and the author of the novel The Illicit Happiness of Other People.)

“Nehru’s Legacy Has Permeated The DNA Of India”