Why Border Villagers Join The Forces

Among the three personnel killed in the biggest operation this year, two were from border villages in Kashmir—one an army soldier, the other an SPO 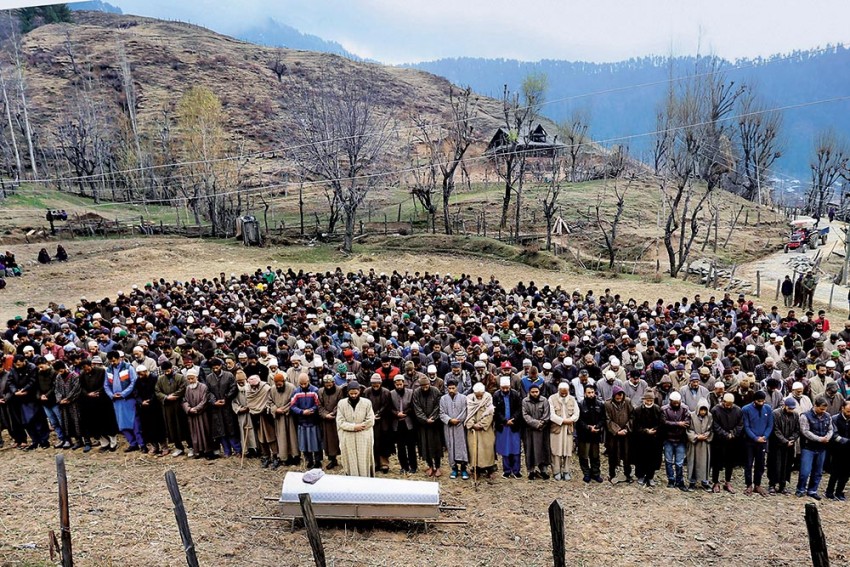 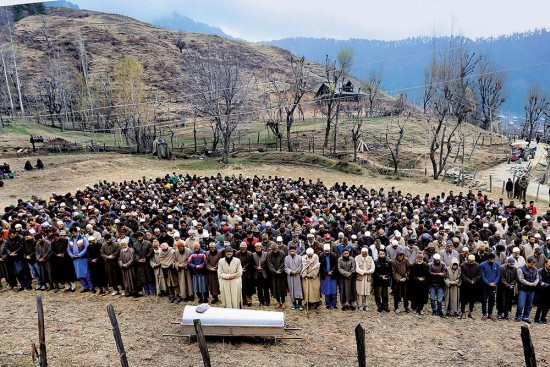 To Iqbal Bajad, who has comple­ted his MBA, his father Yousuf, 40, was an educated man. The first matriculate from the ­family residing in Kachama village of Kupwara district in of north Kashmir, Yousuf was a daily-­wage lab­ourer before he was recrui­ted as a Special Police Officer (SPO) in 1999. He was working for the Special Oper­ations Group (SOG) of the J&K Pol­ice. On Wednesday, March 28, You­suf was killed along with a sold­ier, Ashraf Rather, 35, and anot­her SOG personnel in a gunfight with militants in Halmatpora forest, aro­und 15 km from the village.

The villagers in these parts of north Kashmir’s Kupwara district often work as porters for the army, when not ­employed as agricultural labourers further down in the Valley. There is a government-run middle school, but the dropout rate is high. The primary health centre, villagers say, is usually shut. A kuccha road, full of potholes, leads to this village.

Besides an army soldier, an SPO and a ­policeman working for the SOG were killed during the March 28 encounter with LeT militants.

On Wednesday, Yousuf was at home on leave when he got a call from an off­icer to join the gunfight. It was one of biggest cordon-and-search operations this year, with over 1,000 army and pol­ice personnel deployed against five militants of the Lashkar­-e-Toiba, who had recently infiltrated from across the border and had the advantage of the dense pine forest in this mountainous region. Expecting a much higher number of militants, the army and the SOG had laid several cordons. The army had also rushed in a team of paratroopers. All five militants were killed in the ­operation, which lasted 33 hours.

Ashraf had led from the front during the gunfight as was his habit, say army sources. In 2015, he was part of the longest operation in Manigah area, in which Lt Colonel S.K. Natt of 160 Territorial Army (TA) was critically wounded. This year, seven army personnel from Kupwara have been killed so far in different encounters across J&K. 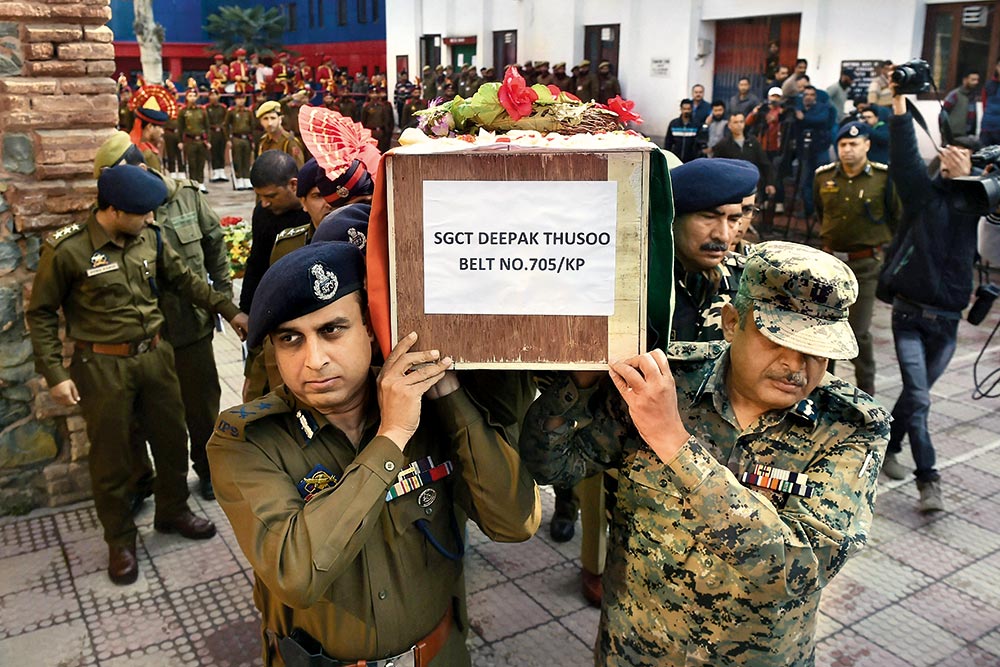 A policeman’s coffin after the wreath laying

Yousuf’s brother, Shams Din, had joined the army in 2004 and is currently posted in Chennai. He was also home on leave, but heard about his brother’s death first on a social media network, and also that the body was recovered after four hours. The Line of Control (LoC) is an hour’s walk from the village. Located between Shamswari ridge and Neelam Valley, and with dense pine forests starting from this last hamlet right up to the LoC, the village has been a key point on the transit route for militants to enter the Valley.

At one point, village elders recall, there were around 60 militants in the area, mostly from this village and adjacent areas. “Ten or 12 local militants, mostly from the Al-Barq group, were killed in encounters during the 1990s,” says the 60-year-old village head, Bagu Chachi. Lal Din Bajad, an elderly farmer, chips in, saying, “Most of those who survived joined the mainstream.” Acco­rding to Chachi, around 35 youths from the area work for the army and the TA, and over a dozen are with the police. Many like Yousuf work as SPOs and are paid an “honorarium” of Rs 6,000 per month, from which they also have to spend on their food while on duty.

Iqbal says injustice has been done to his father. On Sunday, Iqbal was sitting in a room of his uncle Shams Din’s house, along with his mother Reshma, grandfather, grandmother and four siblings, while the whole village was in the lawns of the nearby one-storey house that Yousuf left behind. The house is actually still under construction. “My father sold family land and sent me to Noida to study after our house was burnt in 2014,” he says, without mentioning who burnt the house. The villagers suspect that since Yousuf was participating in anti-militancy operations, people linked with militants might have done it.

Houses in the villages are scattered—not close to each other. Yousuf house was built in the traditional style—i.e. made of wood—and faced south to get maximum sunshine. Like other traditional wooden houses in the area, it had a single entrance and rows of windows without glass panes. The walls of such houses are plastered with clay on the inside to keep it warm in the winters and cool in summers. Now, with most villagers associated with the army or the police, the villagers avoid constructing wooden houses. “Because it is easy for others to burn them,” explains Chaudhary Riyaz, a Class-12 student, whose father Chaudhary Nazir is about to retire from the army. “We build concrete houses now.”

When his father started working as an SPO, recalls Iqbal, the honorarium was only Rs 1,500. “My father would always lament that he participates in operations and is still not given a citation, which would help him get regularised in the force. He died for us,” he says. Despite his father getting killed in the encounter, Iqbal wants his two younger siblings, Shabir Ahmad and Irshad Ahmad, to join the police. “There is a scheme for giving a government job on compassionate grounds to the next of kin of SPOs killed in militancy-related operations,” says a police spokesperson. “The department also gives around Rs 17.50 lakh to the family—Rs 10 lakh as insurance and Rs 7.50 lakh as ex-gratia.” The family of a regular policeman who gets killed in militancy-related incidents gets around Rs 55 lakh in ex-gratia and insurance, and his next of kin also gets a job.

“I have done my MBA from NCRC (National Institute of Business Management Noida). I will prefer to work in a bank,” says Iqbal.

There are around 2,700 SPOs from Kupwara alone in the J&K Police, and around 2,500 in the army, sources inf­orm. Last year, the government rec­ruited 5,946 SPOs, as the central government sanctioned 10,000 SPO posts in the state during the protests that rocked the Valley after the killing of 22-year-old Hizbul Mujahideen commander Burhan Wani in July 2016. This year, however, following complaints that the recruitment was being done in an arbitrary manner, the Union Ministry of Home Affairs (MHA) dir­ected the Mehbooba Mufti-led J&K government to halt the process. The recruitment was done district-wise and the highest number—1,017—were app­ointed from Kupwara district, followed by 604 in Srinagar, 571 in Budgam and 397 in Baramulla.

The MHA last year also enhanced the honorarium for SPOs to Rs 6,000 per month from Rs 3,000. The J&K Police see SPOs as an important element in its strategy to combat militancy and use them in the operations of the SOG.

For Sheikh Abdul Rashid, commonly known as Engineer Rashid, legislator from Langate constituency of Kupwara, the border people initially served as guides for militants, but that has changed over the years. “They saw youngsters crossing the LoC in early 1990s and joined them presuming that if they don’t, they would not have any say in the process of the resolution of the Kashmir issue,” he says. Later, when the army and police operations began, the border areas faced the worst violence. “These areas remained away from media focus,” continues Rashid, who has filed a case against the army for having made him work as a bonded labourer during those days. “There was no limit to army atrocities here. The people could see that the political uncertainty will continue, and they also faced neglect and apathy from the separatists. All these factors motivated people to opt for change. But instead of becoming renegades or Ikhwanis, they chose to join the army, which is seen as a disciplined force. They didn’t work as undercover agents like the Ikhwanis.”

A police official, who did not wish to be named, says the central government made the border people realise that their interests were safer with the pro-India mainstream than in sep­a­ratist politics, in which they had no say. Many locals in the border areas serve in the army as there is a huge military presence, and  the recruitment is also part of managing border villages.

With most villagers ­associated with the army or the police, wooden houses have given way to concrete ones, which are more ­difficult to burn.

“Another important factor is that even if a soldier from the border community was posted within Kashmir, he could still maintain an element of anonymity bec­ause he can use his Pahari language and claim to be a non-­Kashmiri so as not to be identified and targeted by locals,” says the anonymous official. “That option is not available to Kashmiri-speaking youth from the plains or urban centres, so they and their families end up being the ones who get easily targeted.”

Yousuf’s neighbour Lal Din, says Kashmiris are “unfortunate people and victims of the political insecurity”. Explaining Kachama’s transition from militant hotbed to recruitment den for the army and other forces as part of the change, he says, “People don’t have jobs here. There isn’t much education. Joining the belt force (SPOs) is the only way to get employment and be respected. Youngsters want to be in the force for the income and for promotions.” He finds it natural for the hill people to make this choice as they are hardy and physically fit, which helps them perform better in military recruitment tests for the “belt force”, with its lower standard of minimum educational qualification.

Like others, who are least interested in discussing why youngsters in south Kashmir are joining militancy, Lal Din wraps it up fast, saying, “We have our own problems to talk about. All I want to say is that we have no road here. Legislators come and promise us that they would get a road built. We have only been waiting all these years.”

By Naseer Ganai in Kupwara