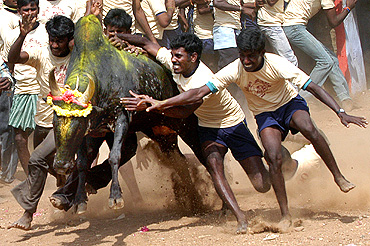 outlookindia.com
-0001-11-30T00:00:00+0553
For now, it's a case of all's well that ends well. The people of Tamil Nadu, particularly in the state's southern districts, for whom the ongoing Pongal festival is synonymous with Jallikattu (taming of the bull), are happy that the sport was given the go-ahead after the review petition filed by the dmk government against last week's ban on it by the Supreme Court was admitted. Political parties across the spectrum, some of whom had backed those threatening to defy the ban, are content that their votebanks are intact.

But Animal Welfare Board (AWB) secretary D. Rajashekhar strikes an admonitory tone: "Don't forget this (the apex court allowing jallikattu to go ahead) is just an interim relief. At the next hearing, we will submit CDs of jallikattu to be filmed in Alanganallur and Palamedu in Madurai district." The first petition demanding a ban was from a person whose 14-year-old son was killed at Alanganallur in 2004. But the Supreme Court banned jallikattu in response to a special leave petition by the AWB citing cruelty to animals. There have been cases of stampedes before this, in which hundreds have been hurt.

D. Regupathy, an organiser of the Alanganallur jallikattu who welcomed the lifting of the ban, had said earlier, "The sport is associated with Pongal from time immemorial. It will be a black Pongal for villagers if the sport is not held this year." All across the state black flags appeared in villages and in Alanganallur and Palamedu, organisers of jallikattu, bull owners and tamers had decided to go on a hunger strike to pressure the government into going for a review.

But many in the state have a bone to pick with the AWB. Actor Riteesh, who quickly formed the Thamizhar Veera Vilayattu Padhukkappu Kuzhur (Association for the Protection of Valorous Sport of Tamils), said, "There are about 2,000 to 3,000 jallikattu bulls in each district. jallikattu is representative of the bravery of men. If the SC wants to heed the plea of animal activists, then let it first stop butchering animals for meat." While animal activists have brushed aside his comments, their indignation has been drowned by protests.

Many believe that not holding jallikattu will invoke the wrath of gods. In one village—Soorakudi in Sivaganga district—the ban was defied and jallikattu was held even before the apex court stay. Four villagers were arrested after the event. But, says A. R. Venkatachalapathy, professor at the Madras Institute of Development Studies, "The court intervention imposing the ban in the first place was unnecessary and an example of interference without knowing the ground reality." He says jallikattu enjoys an "iconic status" that should be encouraged in a world where people are losing their cultural moorings. He sees nothing wrong in political parties agreeing on this issue.

Cho Ramaswamy, editor, Thuglak, points out that since jallikattu is a popular sport, political parties "could not be seen as doing anything to stop it". Congress leader S.R. Balasubramaniam blames the media for "blowing things out of proportion". Venkatachalapathy accuses animal activists of being "oblivious" to humans. "The elite and intellectuals are deracinated and have no sense of Tamil identity," he says. Quoting ancient texts, he says jallikattu has existed for at least 2,000 years. In other words, he is a votary of not disturbing cultural practices, but adds that the sport should be continued in a regulated manner.