Of a weak-kneed Congress and the manufactured dissent of clerics 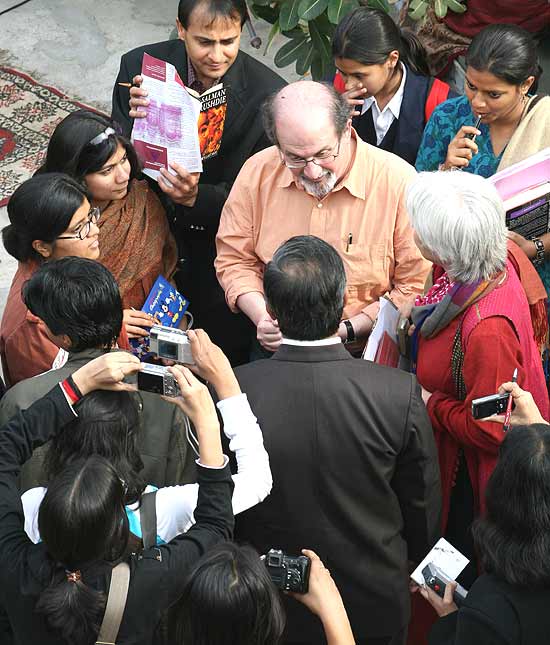 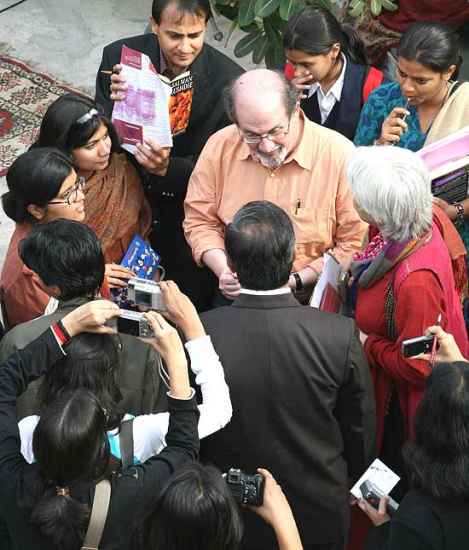 When The Liberal Mask Slips

The situation is as ridiculous as many of the ironies in his celebrated books. But alas, it is not magic realism, but quite the reality, the furore over Salman Rushdie’s proposed visit to India to attend the Jaipur Literature Festival. To some extent, it’s one of those contrived controversies in a season where no other story is competing for eyeballs.

The mullah brigade has made its usual statements about the writer not being allowed to set foot on Indian soil. The TV channels have a great talking point: there are some themes that can always be debated. For 24 years, ever since Satanic Verses invited the wrath of Ayatollah Khomeini of Iran, and was subsequently banned in many countries, including India, Salman Rushdie is always ready material for controversy.

“He does not need a visa. He is a PIO. This is actually a non-issue. It’s a controversy without logic.”
Rakshanda Jalil, Author, Urdu translator

At the time of writing, government and intelligence sources had warned of a dire law-and-order situation if Rushdie came to India, with the Centre putting out stories about banned outfit SIMI hatching a sinister plot against him. Clearly, such stories suggest that the powers-that-be would like the problem to just stay put: in other words, Rushdie should chicken out of travelling to India. Since he possesses a PIO (Person of Indian Origin) card, he doesn’t need a visa. Says Sanjoy Roy, one of the organisers of the Jaipur litfest, “His visit on January 20 stands cancelled. But the invitation to the festival stands.” Well-placed government sources, however, say there is a high possibility of Rushdie attending the festival.

It would be the Ashok Gehlot government’s responsibility to provide security and manage the law-and-order situation if Rushdie arrives in Jaipur. The author had attended the festival in 2007 and there had been no problem. But now that dissent has been manufactured, it has acquired an energy of its own. By now, several clerics, some known, others obscure, have come out with statements. Commentators like Shahid Siddiqui, editor of Nai Duniya and member of the Samajwadi Party, have taken public postures opposing the visit: “He should be allowed here only if he apologises. If he comes, we will exercise our right to protest.” 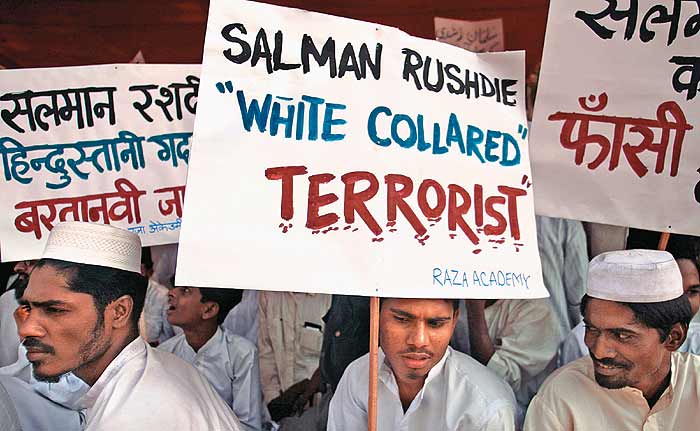 Since a storm is indeed being stirred in the teacup, protests are certain. The TV cameras will be waiting if Rushdie does descend on India, and TRP ratings will shoot up. A celebrity writer being hounded by obscurantists is just too compelling a story. The story also touches on the issue of blasphemy (always a provocative talking point) and the question of whether the Indian state is genuinely liberal.

“Rushdie is low on moral quotient. As for his coming here as PIO, he has the legal right and most people don’t really care.”
Najeeb Jung, V-C, Jamia Millia Islamia

That is indeed debatable. What is not is that the Congress is always nervous when confronted with orthodoxy, and the party has a history of kowtowing to the clerics. Indeed, we can argue that it is the legacy of the Congress that most quasi-government or autonomous Muslim organisations are controlled by individuals either directly from the Deoband seminary or close to it. That has certainly influenced how identity issues of the minority community are articulated and perceived by the larger public.

To his credit, however, Congress spokesperson Manish Tewari says that “there comes a time when people have to stand up for liberalism. I would suggest that the organisers of the festival put Rushdie on video conference if he cannot attend personally”. Fellow spokesperson Abhishek Manu Singhvi reacts to the suggestion that the Centre is planting stories to discourage Rushdie from coming. “It is wrong to say that. It is normal for states to give law-and-order inputs to the Centre. The Centre will weigh the pros and cons and the visit will only be stopped if the law-and-order situation is deemed to be unmanageable.”

The Congress regime in Rajasthan is nervous. There had been a communal conflagration in the Mewat region some months ago when 10 Muslims died, and the party would not want to alienate the community any further. But do ordinary Muslims really care? Ramzan Chaudhary is a lawyer in Gopalgarh village in Mewat, and says that people in the villages are so backward, female literacy among the minorities being as low as five per cent, that they really don’t care about such issues. “If you go to the villages, they will ask who is Rushdie?”

“It’s not an issue for people, it’s a concern for clerics. But if he’s hurt sentiments, he shouldn’t be welcomed.”
M.J. Khan, Spokesperson, Peace Party

Even in urban pockets, it is highly unlikely that Rushdie’s comings or goings are a real concern in minority areas. So believes Ali Javed, general secretary of PWA (Progressive Writers Association): “Islam is not such a weak religion that it should be threatened by Rushdie. All these mullahs who go on protesting have not read anything much anyway. They should just be ignored and not given any importance.” Rakshanda Jalil, author and Urdu translator, asks that since Rushdie came and left quietly last time, why is there an issue now? “He does not need a visa. He is a PIO,” she says. “This is actually a non-issue. It’s a controversy without any logic.”

Even those who would have strong words against Rushdie do not see it as a larger issue for the community. Najeeb Jung, vice-chancellor of Jamia Millia Islamia, has this to say—“Rushdie as an individual is very low on the moral quotient. The Prophet is very special to Muslims and he has never apologised for hurting sentiments. As for his coming to India as a PIO, he has the legal right and I don’t think most people really care about this as a big issue.”

Yet, there is a perception that the New York-based author attending the literary festival could somehow impact the elections in Uttar Pradesh as Muslims would be upset with the Congress for not preventing his visit. M.J. Khan, spokesperson of the Peace Party—which is expected to get a section of the community’s vote—says that the state elections are being fought on local issues and “I don’t think this could become a genuine issue with people”. However, he adds: “It is a concern for the clerics and we believe that if there is a perception that people’s sentiments are hurt, then Rushdie should not be welcomed.”

“There comes a time when we’ve to stand up for liberalism. Put Rushdie on video conference if he can’t attend.”
Manish Tewari, Congress spokesperson

If the Congress is uncomfortable about the Rushdie controversy at this stage, it is because in its DNA there is a pathological fear of the clerics. As a party, it mostly ends up appeasing them. The most infamous instance was when the Rajiv Gandhi government passed the Muslim Women’s Bill to overturn the Shahbano judgement. The Congress has never advocated anything progressive in the backward personal laws that still apply to the community. So, at this stage, when the party is trying to win Muslim support in UP, even minor fulminations by clerics spread from Darul Uloom in Deoband, Saharanpur, to Firangi Mahal in Lucknow, would presumably make the local leaders squirm.

There is a larger problem the Rushdie storm highlights. Today, any random group can claim offence or shout blasphemy about a work of art, historical or literary writing. Politicians in general don’t want to offend anyone—they’d rather please everyone. So from Rama Sene and Shiv Sena-type extremists succeeding in sending painter M.F. Husain into exile, where he died last year, to the Ramanujan essay on the Ramayana being dropped from the Delhi University syllabus, the narrow vision triumphs far too often. Showing outrage over a book or art is also a sureshot way to ensure media coverage for a small group of goons or obscurantists. Politics in India can certainly shrink our imaginations. Salman Rushdie has always created a rich imaginary world of fantastic characters, from farishtas to moors to the unforgettable Saleem Sinai of Midnight’s Children. His own journey over time, space and across continents, unfortunately, seems to inhabit a similarly fickle universe.