Who Put Off The Freezer?

Ottavio Quattrocchi won't go with a whimper. He is back to haunt the Congress party and Sonia Gandhi. Here, we arrange some pieces of the jigsaw, reveal a few wheels-within-wheels. Updates 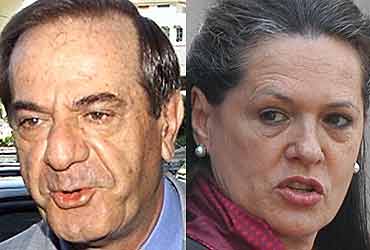 "CPS officials wrote to the CBI on November 16, 2005, asking it to provide evidence which would justify the continuation of the freezing of (Ottavio) Quattrocchi's bank accounts in London."
—Senior CBI official

If the statement of the Crown Prosecution Service (CPS) of the UK suggests that the Indian government unilaterally sought the defreezing of the London bank accounts of Ottavio Quattrocchi, the Italian businessman who is an accused in the Bofors payoffs case, the CBI's version indicates the reverse. It claims it was responding to a query by the CPS which wanted evidence to justify the continued freezing of the accounts. According to this version, when the CBI initially sought the freezing of the accounts in 2003, it had provided details of the Bofors case relating to AE Services with which the Italian businessman was linked, but had not given any conclusive evidence linking the two London accounts with the Bofors case. It had promised the British authorities that it would provide the clinching evidence soon—evidence the agency officially maintains is yet to materialise.