Who Let The Kids Into The Room? 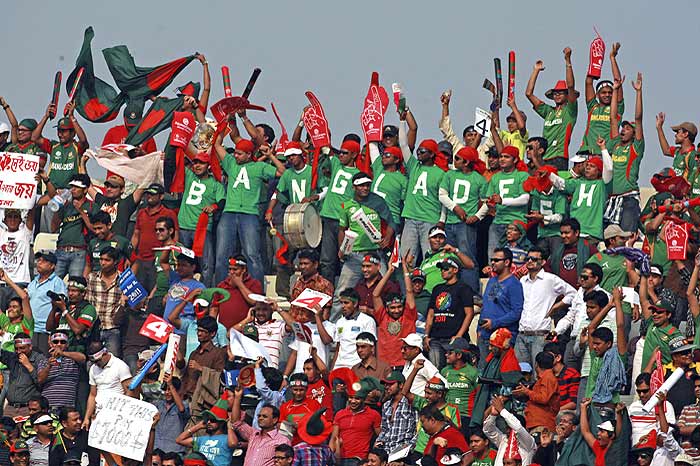 For the ICC, it turned out to be a blessing that it decided to stage the World Cup inaugural in Bangladesh, which is arguably the most excited of the three host countries. There was no way Sri Lanka or even India could have matched the scenes that were seen in Dhaka during the ceremonial kickoff, and then at the tournament’s opening game in Mirpur.

I was staying at the Dhaka Sheraton, which is located in the heart of the city, and despite its supposedly soundproof room I could hear the celebratory noise from the streets. Our hotel was lit up by strings of brightly coloured lights, as were the streets of the city. This decoration wasn’t confined just to the city centre or the vicinity of the ground, but covered a substantially large area. There was nothing hi-tech about the adornment; what stood out was its simplicity.

You could almost accuse the Bangladeshis of being a bit too excited about the event!  There were about 10,000 people outside the Sher-e-Bangla Stadium the night before the India-Bangladesh game in Mirpur, all flush and agog with anticipation—and just for the fun of it. They simply wanted to be around the area that was hosting the first match of World Cup 2011. It really was a big deal for the Bangladeshis.

Those scenes in Dhaka reminded me of Calcutta in the ’70s and ’80s, a similarly innocent passion and excitement every time a major cricketing event came to town. Sure, the metropolis would still be quite excited over hosting a big cricket match—and have sadly been divested of that privilege in this tournament—but I don’t think the Calcutta of today can match its earlier generations for the sheer spectacle they used to mount in their collective fervour.

Indians today are spoilt for choice, and we have consequently become a lot more discerning about things. I doubt we would have shown the same kind of childlike enthusiasm that Dhaka did last week. For that big opening match, most seats in the Sher-e-Bangla stadium, as expected, were taken an hour before the first ball was bowled.

As commentators, we stay cocooned in our air-conditioned box and, because of that, we often miss out on the atmosphere outside. It is only when you step out of the commentary box that you get a sense of the noise that 50,000 excited cricket fans can make. The atmosphere at the Sher-e-Bangla Stadium that afternoon was all passion.

For all the passion, cricket remains an uncomplicated game of bat and ball for Sehwag. Both he and captain Dhoni act as insulators for India.

Typically, it needed somebody like Virender Sehwag to put the whole thing in simple perspective. For all that happens outside it, the sport continues to remain an uncomplicated game of bat and ball for people like Sehwag. He hit the first ball of the much-hyped 2011 World Cup for four, as casually as he would in a net session. He and captain Mahendra Singh Dhoni are the two key figures of the Indian World Cup squad, a team that is expected to lift the  Cup, not just by the large Indian fan mass but also, if grudgingly, by a fair chunk of the rest of the cricketing world. That’s the kind of pressure this team is shouldering, more so because they are playing at home.

Dhoni and Sehwag are the much-needed insulators of this team. Their inherently unflappable nature and overall attitude towards the game will help absorb the unprecedented pressure of expectations for the whole team. These two ‘cool dudes’, through their own actions, will keep reminding the rest of the team that this is the same game they have been playing for years, and just a different tag does not make the game any different. This Indian team should handle pressure better than any Indian team has done so far. As Sehwag told one of my journalist-friends before the World Cup, “Tension lene ki baat nahin hain, dene ki baat hain.”

By trumping Bangladesh so convincingly, India would have given their young opponents plenty to introspect about. I think Bangladesh is slightly overrated in this World Cup. And that’s because they are playing at home and also because of their recent clean sweep of the Kiwis at home. But the fact remains that Bangladesh is still a team that does not have more than one world-class player, thus making them only slightly better than the minnows.

That brings us to the topic of the minnows in this World Cup. After the grand opening in Dhaka, the World Cup immediately entered a phase of lull. A phase when the associate nations, the minnows, take on senior, established cricketing nations. The problem with 50-over cricket is that when there is a mismatch, the game drags on for hours even though the result is a foregone conclusion. In T20, the boredom of a mismatch does not last too long; it does not become as agonising as it does in the 50-over format. And because there are no comebacks, the chance of an upset is higher.

Thankfully, the Netherlands stretched England till almost the last over of the match, reminding us that a close 50-over match still has great appeal. ICC chief Haroon Lorgat recently said the next World Cup will have only 10 teams. This did not please the associate nations; they naturally feel the World Cup is the only stage where they get exposure and a chance to show their worth. But as we have seen, catapulted to the top drawer minus regular exposure, more often than not they fall well short of the prevailing international standard.

I firmly believe that the administrators have only one obligation—and that’s to the viewers. On the most exalted stage of any sport, administrators are obliged to showcase excellence. And that’s what the ICC cricket World Cup should try to become, an exclusive club with a privileged membership that has to be earned. Applicants for membership have to pass stringent tests and standards to join this peer group. This will ensure that the World Cup guarantees fans the best cricket show possible on earth, thereby also sealing its viability in the years to come.

Currently, 50-over cricket is at its most vulnerable stage, and the ICC’s focus has to be on quality so that it becomes a show all cricket fans desperately look forward to. Every World Cup match should hold some spectator interest; the last thing that you’d want to advertise to the world are empty stands. Do you ever see empty stadiums for any game in the football World Cup? Those are the kind of goals administrators have to set for themselves.

It sounds cruel but it has to be said: there is no place for compassion here. Compassion and understanding towards the associate members can be shown on other ICC platforms, not in the 50-over cricket World Cup. Take Sri Lanka. They had to keep knocking hard on the door for a number of years before they were let in into the exclusive club. When the door finally opened for them, not only did they barge straight in, but in 1996, they sat at the head of the table.