In the '80s it countered the KHAM axis, but might come up short now 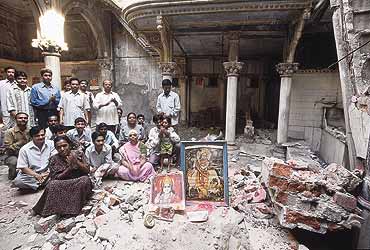 outlookindia.com
-0001-11-30T00:00:00+0553
Where is Hindutva?" asks Shankersinh Vaghela, languidly waving his hand towards the main secretariat in Gandhinagar. A pause later, he adds: "I can't see it anywhere." The man who introduced Hindutva in Gujarat before it was known by that name, Vaghela does not see any merit or electoral gains in it any longer. But does the BJP too share his view?

Regarded as the laboratory where the BJP and the Sangh parivar have been experimenting with Hindutva, the Gujarat elections ought to be the test case for the BJP's future strategy not just for the state but also for the rest of the country. Opinions within the BJP are divided. "Of course, there is a Hindutva wave, but its scope is limited. You have to remember that communal disturbances affected about 30 per cent of the state. Most of these were urban areas. The rest—70 per cent—are untouched," says a BJP leader.

Privately, even some BJP leaders admit they were shocked at the scale of violence after Godhra. This, they argue, is no commitment to Hinduism. Gujarat, a state moved by its trading instincts, has gone into depression. The months of violence have hit the minority community hard. But Hindus haven't been unaffected either. Scores of them—mostly innocent bystanders—have died in police firing and close to 300 people are behind bars for rioting. The vhp is looking hard for lawyers and money to fight their cases, but the damage has been done. The mood's sullen. "Hindutva was used to bust the KHAM axis in the '80s. Now it's spinning out of control," says Aziz Tankarvi, editor, Gujarat Today.

Other BJP leaders say that while the BJP government in the state has done some commendable projects—the introduction of Narmada waters in the state, infrastructural developmental programmes, drinking water schemes in the villages despite repeated droughts and privatising education—it is only willing to claim success for having propped up Hindutva in the state.

BJP leaders now quote the example of the Congress, which did well as long as the Seva Dal was serving the party. No sooner did Youth Congress hoodlums take over that it went on a downward spiral. The same, they say, is happening to the BJP. It is allowing the vhp and the Bajrang Dal youth squads to take over. The party leaders are being warned of this. But no one seems to be listening.

Analysts agree that the BJP government's stock was plummeting before Godhra happened and the violence may have pulled it back from the brink. But is it going to be enough, particularly if the elections aren't held immediately?

Modi's Foes In The BJP