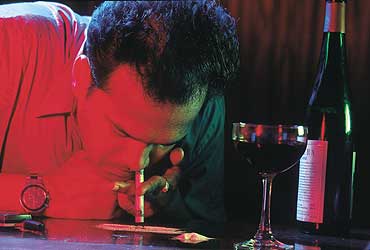 outlookindia.com
-0001-11-30T00:00:00+0553
On heady evenings in happy Mumbai, where all bad things are rumoured to happen, a new way of life has evolved, brought about by a generation of wealthy youngsters whom an imaginative cokehead calls "sophomorons," for they are largely people who have returned from American colleges. These are children of that exclusive group of parents who are said to hold out silver spoons—just about 3,000 of them in Mumbai, not more than 5,000 in the whole country. What they can afford to do, in boringly clinical terms, is feed cocaine to the hypocampal area of their brains by inhaling or having it with paan or injecting it into the blood stream (shooting). There is, also, something called speed-balling which is injecting coke in one arm and heroin in another. Universally accepted as the queen of drugs, it costs between Rs 2,500 to 3,500 per gram in India. But a certain variety of coke called Columbia White, a pure form, according to some people, costs between Rs 8,000 to 10,000 per gram.

A.G. Ubale, zonal director of the Narcotics Control Bureau (ncb), however, says he has no knowledge of the drug costing that much. But even in its cheapest form, it is still a few times more expensive than gold. Queen Cocaine is often laid on a smooth surface, lined with a blade and snorted into the nostrils, for 5 to 6 hours of unstoppable energy, for a sweet lingering guess-that-all-is-well-with-the-world. And for a feeling of invincibility that often comes with a suspicion that the nose is dripping. Twitching the nose is a small price one pays for the high, especially the sexual high many users claim to find with the drug. Advanced addicts do suffer perforations in the nasal region. A rolled currency note is often used for snorting, though one old hand says: "Frooti straw is the best". But for some reason, most of the world uses currency notes. In the US, coke is so frequently used that a percentage of 100-dollar bills in circulation is said to have traces of coke. However, in India, it's the habit of a few because it's exorbitant. But that few, it appears, includes some of the most famous, loved and hated personalities in the country.

Says a top ncb official who had questioned Bollywood hunk Fardeen Khan, arrested in a pre-dawn swoop for purchasing coke from a dealer: "Fardeen didn't seem to have anything to hide. He was a beginner but he said that almost all Hindi film stars had it, including some leading actresses." "Most of these actors," he adds, "have it regularly to keep up with their busy work schedule and, of course, to have a lot of fun." There was a time when Sanjay Dutt openly claimed that he could do five grams of cocaine a day, a brag that is rubbished by some addicts as "impossible". Most top actors are under peculiar pressures, apart from just tough work schedules. Says director Mahesh Bhatt: "When an actor becomes famous, he feels that since the spotlight is on him, everybody would come to know that he has no talent. But coke makes him feel big and important." It's this line of thought that's continued by another noted filmmaker: "I learnt today that a dealer called Hitin from Bandra delivers coke to two of our top actors on a regular basis. I find it difficult, though, to believe that they could be addicts. These guys sometimes work all day and night so they may want to feel fresh. Two actors who have been around for some time and one heroine who was a rage in the eighties are hooked to coke because it somehow comforts them into a false belief that they still mean something."

Hindi films stars, however, are just a part of an elitist population that's in the throes of the new culture. ncb has once been alerted of what's popularly known as a rave party in Mud Island, an outer weekend haven of Mumbai. The party wasn't raided for some reason. Perhaps because, as Ubale says: "The end user is not our concern. We're after the dealers." However, ncb received information of what happened there. Says an official: "Every male paid Rs 13,000 to get into the bungalow. Entry was free for women. First there were drinks. Then, later in the night, coke was dissolved in warm oil. And this was rubbed on the bodies of some naked women. The mucous membrane in any part of the body, not necessarily nostrils, picks up coke." The frequency of such parties increased so much that ncb requested the cops to raid all parties, randomly, to scare the prospective sinners.

Coke is described inconsistently by some users as an aphrodisiac and by others as "a dampener", depending on the personality-type of the speaker. But none of them have any complaints. Being high on coke doesn't make one sway or blabber or wade through a sea of seemingly real metaphors of beauty. It is an intoxicant that suits sophistication. "It goes well with grandiose wealth, stardom and style," says Dr Yusuf Merchant who runs a rehabilitation center.

A 24-year-old procurement executive, who got rid of the drug after being hooked on it for six months, says: "You feel you are king and the others fools. You feel you can do anything. You can stay up all night and love every moment. Don't tell anyone that coke is bad. He will think you are a fool. Tell him coke is good, it's so good that he shouldn't touch it." Coming from the plush Napean Sea Road area in Mumbai, his father's wealth, he says, was no match to that of the two sons of a top industrialist family. These brothers are said to be among the first apostles of coke in Mumbai. He remembers his first brush with the wondrous drug—the ambience was spellbinding. "It was in a bungalow in Prabhadevi. There were some 50 people, most of them in their early 30s, everybody dressed well. It was all very elegant. I saw one actor, some veejays and models. Then someone placed a crystal bowl with coke in it. And some blades were placed like wafers in the bowl. There were glass rods for snorting and there were candles around the bowl to heat the blades. And there was wine. Nobody was loud, nobody misbehaved. I was conscious about my looks. That place and the crowd makes you feel poor."

He also attended a party hosted by the same hosts near Anjuna Beach in Goa. "There we mixed other drugs like heroin and Ecstasy with coke. In both places, the dealer was invited, just in case we needed more." He says that though he was on brown sugar and heroin for a long time, once he had coke, he quickly shifted loyalties. And to afford coke almost everyday, he became "enterprising". His enterprise initially began by forging his father's cheques and stealing ornaments from home. Then he hit upon a simple plan. "I stole a Maruti 800 from the next lane but when I couldn't pop it off, like a fool I parked it in my building. I might have been really drugged, for one day I took the car to a mechanic to sell it off. He recognised the car and went straight to the cops. My friends found it charming that I would steal a car for coke. I didn't come across as poor and needy, but as a wild son of a rich dad."

For a growing crowd of party creatures, most of whom do not belong to that variety which has to punch a card at 10 in the morning to prove that they are at work, coke is becoming the route to stretching the night into a phenomenon called "after hours".A girl working for an events management company says: "Coke is also a fashionable pick-up line today. 'Want to do some coca?' is considered a smooth introduction." Most people in this group may not have to earn a living but when the middle class comes in contact with this way of life, things can take a very sad turn. A 30-year-old middle class accountant, who came in contact with coke two years ago, says: "For the one year that I was hooked to coke, I needed Rs 30,000 every week—25,000 for coke and the rest for wine and other drugs. Every Monday I'd try to organise the money and it would all be over by the weekend." He survived this phase not just by borrowing money from his brother, but also through a scam. "I used to work in the accounts department for a huge company that was breaking into sister concerns. So every time an employee was shifted from one company to the other, his provident fund would be lying in the bank. I would speed up the process for 10 per cent. I made a lot of money." Today, though he has broken free from coke, he is not normal enough to fit into any good job.

Most people who take coke believe that it's not harmful because it doesn't have physical withdrawal symptoms like other drugs. Despite the fact that coke energises its users without leaving any perceptible traces, the psychological damage is immense. The most evident damage that coke leaves in its users an intense paranoia that lasts even when they are not on a high, and continues for months after the drug is given up. One former addict has mirrors outside his windows because he's scared the army is coming to attack him with helicopters. As to why they would want to kill him is something he is working on. Remembers another former addict: "I used to feel that eyes are following me everywhere. I thought everybody was talking about me. I'd sit with coke and wine and not budge for days."

Statistics prove that coke is extremely difficult to give up. Success rate in American rehabilitation centres is 2 per cent. A prescribed treatment for coke addiction in South America is lobotomy. But the new generation of flower children in India are on the roll. And, hilariously enough, some of these people who congregate to snort are that variety who are paid to say on television that you and I shouldn't do drugs.