For Indian men, nothing's fairer than white, and nothing 'more available' 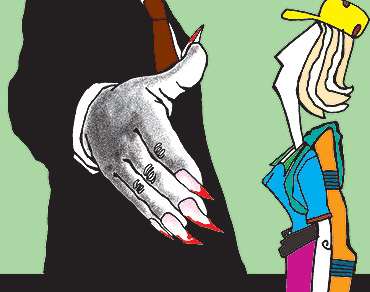 outlookindia.com
-0001-11-30T00:00:00+0553
I know a Romanian student who is studying classical dancing on scholarship in Delhi. One evening, an autorickshaw driver extended his hand and tried to grope her thighs. She hit him so hard with her bag that he is not likely to forget that in a hurry. Many foreign women I've met have similar India stories to tell.

Why do Indian men behave so badly with foreign women? Recently they arrested a security guard in a backwaters resort in Kerala for trying to molest two Canadian girls aged 12 and 14. The family cut short their holiday and left. The police in Goa are looking for a man who allegedly raped a British woman after giving her a lift. An American tourist was sexually assaulted in a temple in Pushkar. A guesthouse owner in Udaipur is accused of raping a journalist from England. The list is endless. All this and more happened in the last month or so.

If this state of affairs continues, word will spread that India is no longer a safe place for women to travel. In Saudi Arabia, women are not allowed to drive, they cannot teach male students or treat male patients. We are much more civilised. We just don't allow them to walk safely on our streets, especially if they happen to be white.

By the time you read this, the alarm bells would have rung in the Union tourism ministry, and the minister would have called a meeting to see how female visitors can be protected from our desi louts. The situation might improve for a while in the coming months, but you can bet your tourist dollar that it will be business as usual after that.

Sudhir Kakar, who lives in Goa, says that a white woman walking alone there is likely to be stopped by someone on a motorcycle and asked point-blank, "Do you want to be f*****d?" Or words to that effect. Kakar is an authority on human behaviour and I asked him why this should be so. "The Indian woman is a maa, a beti or a bahu for these men. The white woman, on the other hand, is fair game. She is a whore."

Sexual harassment of women is a worldwide problem. They get their bottoms pinched in Rome. In New York, men on construction sites will make lewd remarks to pretty women passing by. The behaviour of Indian men is less innocuous; there is nothing playful about it. He wants to bed that woman, nothing less. And he is prepared to use force if necessary. He has the impression that westerners treat sex as casually as shaking hands.

This is racism, but there is more to it. Indian men prefer fair women to dusky ones. And there is nothing fairer than white. If you need convincing on that point, I suggest you turn to the matrimonial pages of our Sunday newspapers. All the potential brides have fair complexions. The dozens of creams in the market that claim to whiten the skin all do brisk business.

An Indian man may not be willing to marry a white woman but, if he had a choice, he would prefer to have sex with a white woman rather than an Indian one. There are other factors involved in the harassment of white women—lack of sexual outlet, men still being virgins well past puberty, sometimes frigid wives—but the colour of the victim's skin plays an important part. You will not find African women being harassed in this country.

Tourists are more vulnerable. They usually haven't been long enough in the country to read the signals right, to figure out that their polite response to what seems to be a helpful, friendly gesture is often construed as a readiness for sex. White women who have made India their home have less of a problem. They have taken to wearing salwar kameez, they have some knowledge of Hindi, which establishes their local credentials, they don't accept invitations for a drink or a movie or a ride from men they do not know. They have learnt how to freeze someone who is too persistent in his attentions or getting uncomfortably familiar, and to walk in a manner that puts out a clear signal: don't mess with me.

The Lonely Planet guide advises female tourists to refrain from wearing sleeveless blouses, tight-fitting clothing or from trying the bra-less look. "Getting constantly stared at is something you'll simply have to get used to. Just walk confidently and refrain from returning male stares, as this may be considered a come-on."

That's sound advice. The Indian woman would have learnt these tricks with her mother's milk!