A rare Amrita Sher-Gil study of rural women is sold for a record Rs 6.9 crore 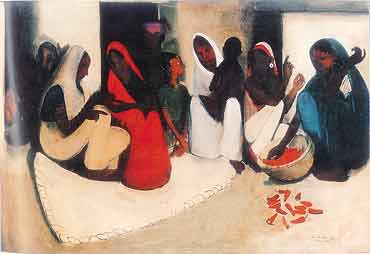 The recent sale of Amrita Sher-Gil’s 1938 painting Village Scene for Rs 6.9 crore at Osian’s auction in New Delhi —the highest price ever paid for a painting in India—testifies to the growing value placed on her work. It’s undoubtedly a masterpiece, but the astronomical price is also because Sher-Gil’s work rarely comes up for sale. Most of her approximately 200 works are either with the National Gallery of Modern Art or her family. Classified as national treasures, they cannot be sold outside India.

Village Scene, bought by Delhi-based industrialist Nand Khemka (see box), is one of a series of paintings Amrita did while staying at her uncle’s estate in Saraya, in UP’s Gorakhpur district (the family owned sugar mills there). The leisurely, monotonous rhythm of life on this rural estate gave Amrita the opportunity to spend hours observing village women as they went about their chores. Village Scene captures the grace and beauty she saw in their humdrum lives, the colour, form and composition she instilled into quotidian rural scenes. The painting also shows the different artistic traditions, both foreign and Indian, from which she drew inspiration.

Amrita Sher-Gil (1913-1941) was born in Budapest to a Sikh aristocrat and his Hungarian wife. She spent her initial years there, and at the family’s country home outside the city, where she became familiar with pastoral life. On their return to India, the Sher-Gils settled in Shimla and it was here that, recognising her talent, the parents decided to have her trained in Paris. Amrita learnt the basics at the Ecole des Beaux Arts, the premier art institute of the time. She lived life to the hilt in the cafes and streets of the city, plunging with abandon into the bohemian Paris art world. 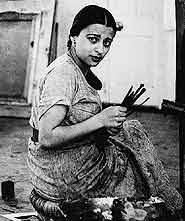