Whispers Of The West Wind

No more bling, it's warm colours and lean long lines 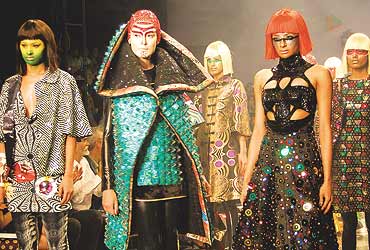 outlookindia.com
-0001-11-30T00:00:00+0553
The Indian team might want to see the god of cricket. Wielding a bat and holding a ball, he sits on the pallu of a Satya Paul sari with the globe as his crown and the World Cup at his padded-up feet. 'Bowled on the Runway' by Satya Paul was intended to be fashion's link to the bigger picture. But that day India lost to Sri Lanka. When hapless models in cricket-inspired saris, holding cricket gear, walked the ramp, the audience hooted. This was "fashion malfunction" at its best at the recent Wills India Lifestyle Fashion Week (WILFW). It underlined that fashion is about winning, not the vanquished.

But when King of Whimsy Manish Arora told a futuristic tale with metallic colours, space-age characters, laser lighting and racy music, it was the most spectacular show, combining performing arts with unpredictability and shock value. Everything fashion must have. Futurism is the existentialist new black. And by logical extension, Arora will show at the Paris Fashion Week later this year.

Ten years ago, most Indians didn't know what to do with fashion. Even for shaadis, no one would replace a Benarasi sari with a Swarovski-studded evening gown. One white shirt was good enough to see you through a job interview, the doctor's clinic and a late night film. Now the white shirt has numerous interpretations. One to feel powerful. Another to look sexy. One for the business conference and another for lunch with the boys.

Indians now dress up for work and leisure, shopping and sleeping, for love and war. How can we snigger at fashion? Some buy luxurious living through Blackberrys, global holidays, air-conditioned schools for children. Others buy fashion. The style-conscious environment created in India has given the much-criticised fashion weeks a new context.

So does India need fashion? And does fashion need India? The answer to both would be a resounding yes. But between the two lie the many contradictions facing Indian fashion today.

Both the recent fashion weeks for Fall-Winter '07—WILFW at Delhi and the Lakme Fashion Week (LFW) at Mumbai—only reiterated that fashion is in fashion. Of course, there are more fashion groupies than there ever were. Nobody knows who most of them are. Dressed in trends you saw on the ramp last time, they speak in a challenged vocabulary of 'hot', 'cool' and 'happening'. There are babes in the wood as well as the seasoned know-it-alls. Guys with low-crotch salwars and pierced eyebrows. Girls in short dresses, strappy sandals and black nailpaint on toes. There are the behenjis too—some in black dresses, others in saris. The overall atmosphere may reflect a desperately aspiring India, but the fashion weeks indicate a style evolution that only the very myopic will refute. 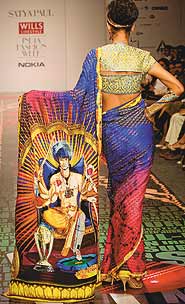 It may be difficult to assimilate it, but all the nuances are present. If you worry about what to wear next season, here are the key notes. Keep the colours warm and muted. Black, burgundy, olive, plum and koyla (Rohit Bal's version of charcoal) will be the palette. The fling with bling is over. Aim for the international lean and long lines in silhouettes, like skinny pants and drainpipe trousers—the flare is out. Coloured, sequinned, printed stockings and leggings will make you trendy, as will coat dresses, gowns and patent leather boots. Accessories will continue to be big and chunky—wear as many as you want. Tarun Tahiliani's gowns and suits are non-radical but they have power and punch, while Anamika Khanna's tunics with shibori edges could make you look liberated. For well-finished metallics, check out Cue by Rohit Gandhi and Rahul Khanna; for a grunge look, try Sunday Bazaar men's shirts transformed into women's wear by Mumbai newcomer Anuj Sharma. If you must be the modern maverick, there are Arora's space-age garments, best worn as separates with a no-nonsense other half. If you believe in textile conservation try Deepika Govind's ensembles in Northeastern muga silk.

Pomp, experiments and talented newcomers like Zubair Kirmani and Bhagalpuri Sanjay Chauhan apart, fashion's biggest concerns—business, profitability and viability beyond the catwalk—remain mired in debate. Even minus the confusion between couture and pret lines; between Spring-Summer and Fall-Winter, the shift towards western silhouettes has begun bothering Indian buyers. They are in the majority and insist the biggest market is at home, whereas only about five international buyers visit the Indian fashion weeks every season.

Pradeep Hirani, who owns six fashion stores—Kimaya and Ayamik—in Delhi, Mumbai and Dubai, and will soon add 11 more across India, is categorical. "Most Indian designers have murdered the Indian silhouette, ignoring the fact that 80 per cent of their sales are to Indian buyers. Not just that, their colour palette tries to appease the western buyer," he says, adding that this season 17 shows in the two fashion weeks focused only on the colour black just because it's strong on the international runway.

Many agree. Even Calcutta designers Monapali, known for their Indian sensibility, have made gowns. Suneet Varma, for instance, showed a fully western collection, while Ashish Soni focused on tweeds, velvets and woollen textures in colours that wouldn't add cheer to an Indian wardrobe. We like bling and embroidery. We want drapes, not patterns, say experts. Positioning is crucial for Indian designers. Ritu Kumar who was till now guided by tradition and ground reality too showed a collection that mixed the tropical, beach, and safari looks and was termed as a "departure" at best. A polite term for hotchpotch without a statement.

The bottomline is that after seven years of fashion weeks in India and reasonably good business as reported, barely a handful of designers can pull off a memorable show, a wearable collection and an original idea. Given that about 63 designers had 42 shows in Delhi itself, this calls for serious editing. 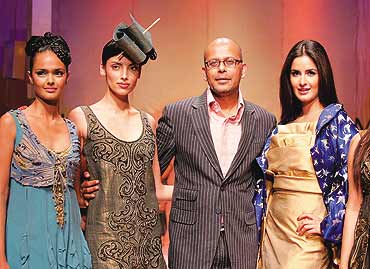 Rathi Vinay Jha, FDCI director-general, agrees. "Shows as well as collections need to be edited and we will ensure it," she says. "But don't forget that it is an evolving scenario where we are all learning and the designer community needs to mature." They better do it quickly, since FDCI has signed an MoU with Fashion Pakistan for advisory collaboration for its couture week to be held in September. Jha, who has been instrumental in developing the India Fashion Week through FDCI, thinks the task isn't easy for Indian designers. "I sympathise with them. In one show, they must target different markets—local, Middle-Eastern and international," she says, adding that the young Indian generation's preference for western wear is undeniable.

Designer Narendra Kumar Ahmed, whose collection Oriental Fantasy drew much applause as the finale at LFW, calls it designing for the future. "The western ideal in clothing is universally the notional one to convey liberation and modernity. That's what even the Indian consumer aspires for. Functions before and after the great Indian weddings call for cocktail dresses, not saris," he says. Hence, the sari, formerly called the most dramatic drape in the world, has been shortchanged.

As fashion becomes germane to the new India, it's time to call a spade a spade. Two fashion weeks every season, politically and geographically split, do not work. Both Jha and Anil Chopra of IMG must heed the fact that 'The Partition' is doing Indian fashion a disservice. A joint script is needed—giving space and opportunity to emerging designers, and a selection from the old order to snuff out self-repetition. Burying the hatchet is the need of the hour.

Indian fashion will also make better sense if guest models are people with a point of view, instead of socialites or Bollywood nobodies. Americans find a $29 Shetland wool pullover trendy because Bill Gates wears it. John Galliano for Christian Dior has a special affinity with the colour red, also because it is the colour of carnage—a dominant memory of revolutionary France. Indian fashion too needs a cause for the right effect. Rajesh Pratap Singh tried it by getting Tabu—awash in the success of The Namesake—to walk the ramp, and actor Naseeruddin Shah to recite poetry.

It's a long haul. Fashion needs exclusivity, yet must be inclusive as a masstige brand. An FDCI seminar on brand management for the fashion industry, strategically titled 'Stitch in Time', had Union commerce minister Kamal Nath as chairperson sounding more enthusiastic than the designers. "In half the time you take to submit a proposal, I will clear it," he said, promising to fund fashion initiatives. Listen to him. Because fashion will not go out of fashion in India.

Coming Of The Dot Cons