Sasikala’s coup was always lurking in the script somewhere, but OPS’s defiance has stumped her 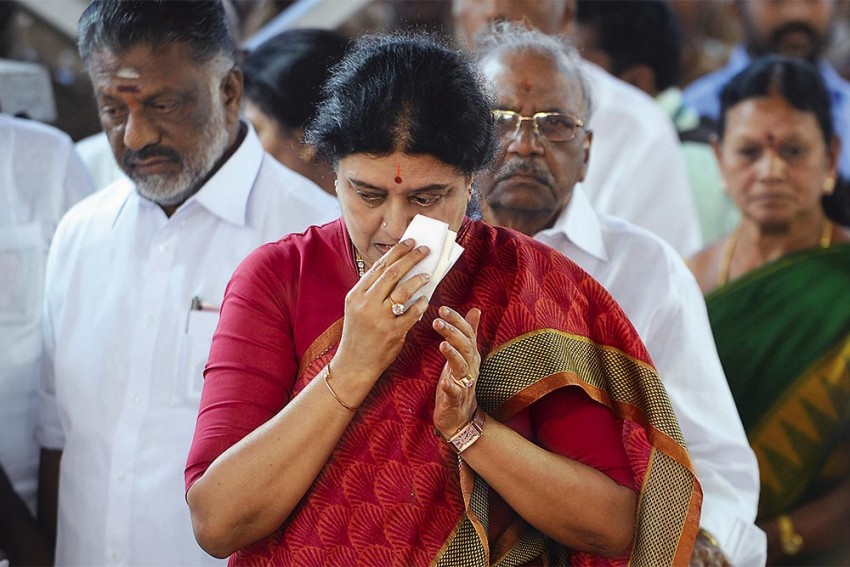 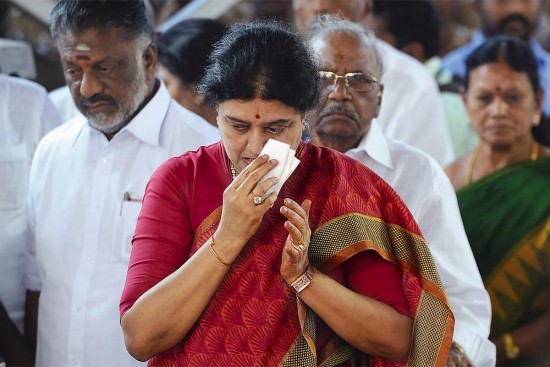 History has the uncanny knack of repeating itself with a remarkable orderliness. Those who witnessed the 40-minute meditation of Tamil Nadu Chief Minister O. Panneerselvam at J. Jayalalitha’s memorial on February 7 and his calculated outbursts later on against AIADMK general secretary V.K. Sasikala, cannot but be thrown back to the 1980s. After M.G. Ramachandran’s death in 1987, the AIADMK was caught in a similar situation. Revolting against the then leadership of MGR’s wife Janaki, Jayalalitha said she was humiliated by Janaki’s supporters, just as Panneerselvam talked of his own humiliation at the hands of his fellow-party persons. The party’s major leaders had thrown their lot behind Janaki while the mas­ses hailed Jayalalitha as a leader.

Again, the events unfolding in Tamil Nadu today bear an uncanny resemblance. The party supports Sasikala while the general public seem to be in overwhelming favour of Panneerselvam . Sasikala’s February 5 decision to become the chief minister was not all that unexpected. Ever since she took over as the party’s general secretary on December 31, party seniors including a few ministers have gone on record demanding that she be the chief minister. Sasikala herself is said to have nurtured chief ministerial ambitions and was probably expecting to have a smooth ascension to power. The sudden revolt of Panneerselvam turned out to be a Kafkaesque twist to her otherwise fairy-tale ride on the road to power.

Revolt was probably brewing up in the AIADMK but for many, Panneerselvam was the unlikeliest of them all to engineer one. The soft-spoken and ever humble MLA from Periyakulam was rewarded for his staunch loyalty when Jayalalitha chose him twice to replace her as chief minister when she had to relinquish the post ­because of the cases against her. Pan­neer­selvam thus became a natural choice for the CM’s chair when Jayalalitha passed away without naming a successor. The ­arrangement also gave enough time to Sasikala to gauge the mood of the party. When party seniors lined up in a blatant act of desperation at Poes Garden almost begging her to take over the reins of Jayalalitha, Sasikala perhaps became confident enough to do a Jayalalitha.  “She perhaps wanted to know that the party will be firmly behind her. As far as public opinion was concerned, she was probably thinking she still had time. The party had four years more to go in power. Sasikala wouldn’t have expected OPS to revolt. That makes things slightly difficult but we still have the numbers,” says a senior AIADMK leader.

Narain Rajagopalan, a Chennai-based political observer, couldn’t agree more. “Sasikala was probably expecting a revolt within the party but not this kind of move for Panneerselvam. There were voices of protest against her, including those of Jayalalitha’s niece Deepa Jayakumar and AIADMK’s estranged MP Sasikala Pushpa. But Panneerselvam’s revolt comes at a very wrong time for her. She wanted to be sworn in as CM regardless of the pending disproportionate assets case apparently to ensure that she has a powerful communication channel with the Centre. The whole issue is now complicated. Panneerselvam has become an unlikely hero in that he speaks out against Sasikala and her family.”

For Panneerselvam, it was a moment of coming out. Breaking his long spell of sil­ence after the 40-minute meditation, he went about meticulously explaining to the journalists how he was humiliated and sidelined by Sasikala and her coterie. “She walked away in midst of my address in a media conclave. I was kept in dark about the MLAs’ meeting and was forced to sign my resignation papers” he said.

Sasikala was quick to call him a naked traitor and dismiss all his allegations as baseless even as Panneerselvam, with his disimpassioned smile intact, began collecting support for himself. Senior leaders ­including former assembly speaker P.H. Pandiyan and party’s presidium chairman P. Madhusudhanan threw their lot behind Panneerselvam as also a handful of MLAs. Sasikala still seems to have the numbers on her side, but with speculation about the BJP tacitly backing Panneerselvam’s revolt, things still remain fluid in Tamil Nadu. 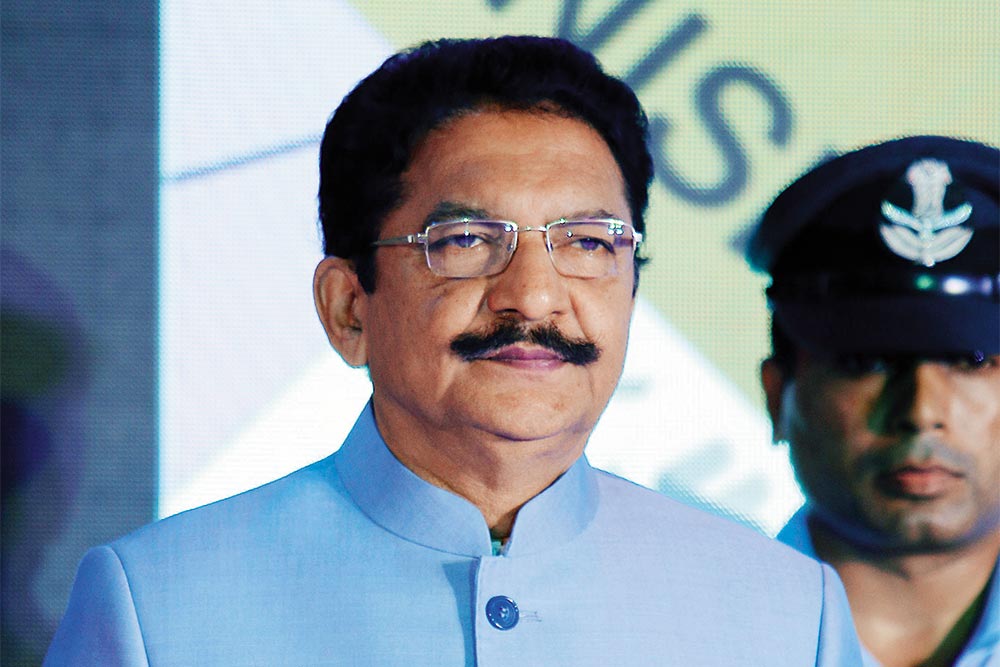 Photograph by Fotocorp
The case against Sasikala might be the reason why Governor Rao (above) hasn’t ­invited her to form government yet.

“It certainly looks like the BJP is behind Panneerselvam’s revolt. But wasn’t the BJP behind Sasikala when Jayalalitha was in hospital? Otherwise how could Sasikala be powerful enough to turn even the governor away at the hospital? It is strange they have now chosen to support Panneerselvam,” says C. Lakshmanan, professor at the Madras Institute of Development Studies. “Panneerselvam is not as good as he is made out to be, but for sure we know who Sasikala is. We have had a taste of how it will be if she is in power way back in 1991-96. There are reasons to believe that Sasikala is still a pawn at the hands of her relatives—the Mannargudi Mafia—and that even now she can’t take any decision independently.”

Rajagopalan says national parties were always keen to infiltrate into the workings of regional political dynamics and in the vacuum created by Jayalalitha’s death. “The BJP certainly wants to capitalise on that,” he says. “But it will never be able to make inroads into Tamil Nadu because Tamils as an ethnic community never wear their religion on their sleeves unlike their northern and western counterparts. The BJP’s and the RSS’s basic weapon of religious supremacy finds fewer takers in Tamil Nadu. So yes if BJP wants to influence state-level decisions, it can. But whether it will help BJP grow inside the State, it won’t. For now they can be happy about exercising control over a weak ruling party and enjoy power without face or responsibility.”

But at this juncture, Sasikala too hesi­tates from rubbing the BJP the wrong way and insists it’s DMK that is behind Panneerselvam’s revolt. “She also obviously needs the BJP’s support to survive, especially with the judgment in the disproportionate assets case expected soon. So it will be wrong to say only Panneerselvam is currying favour with the BJP,” says Lakshmanan.

Observers say the case might be a reason for the delay on the governor’s part to invite Sasikala to form the government despite the numbers in her favour. If Sasikala is convicted in the case after taking over as the CM, it will complicate things for the state greatly.

If Panneerselvam manages to get the numbers, it remains to be seen if he will be able to be an assertive leader. “He has the support of the masses because he is so approachable and down to earth. But you need to be tough to handle a party like the AIADMK. But who knows, he might just do it too, just as he revolted against Sasikala. Who would have thought of that?” says a senior journalist.

In the absence of tall leaders like Jayalalitha and M. Karunanidhi (he has remained inactive since January) who have dominated the political scene of Tamil Nadu for well over half-a-century, the state’s politics is perhaps all set for an intense churning. “But we cannot expect a radical shift overnight. This drama is a culmination of at least six or seven decades of the politics of sycophancy, cult leadership, lack of democracy, extra constitutional authority and massive depoliticisation. We just have to wait and watch” says Lakshmanan.  What awaits Tamil Nadu at the end of this long drawn drama is anybody’s guess.