Where Holding Back Is A Virtue

Smug in our restraint, we delight when sex goeth before a fall 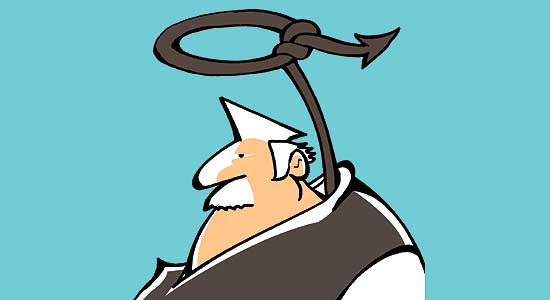 Illustration by Sorit
Jyotirmaya Sharma January 18, 2010 00:00 IST Where Holding Back Is A Virtue

The sight of a man in his 80s lying in bed with three young girls ostensibly trying to pleasure him isn’t news—at least not in India. Not even if the recipient of these unusual erotic ministrations happens to be a public figure holding high constitutional office. Elsewhere, he would have either been the object of endless gossip and ridicule or seen as the very embodiment of machismo and interminable virility. But here, rather than causing great outrage or shock, the N.D. Tiwari saga only generated serious misgivings about the ability of a man in his late 80s to ‘do anything’ at that stage of decrepitude and visible physical infirmity. “He can hardly walk,” said a friend, “so what could he have possibly done?” It is then futile to argue that all sex manuals locate sexual activity between two ears and not between two legs!

The seeming disinterest in the sexual peccadilloes of politicians has nothing to do with us being prudish, Victorian or generally squeamish about sex. The reasons lie elsewhere.

Politicians and bureaucrats in India are usually not attractive figures. With few exceptions, they dress badly, smell foul, look unhealthy and are devoid of charm. They are pompous, self-righteous, patronising, condescending and shrill. The visual image that they present is desexualised in the extreme. In projecting a sexually desirable persona, they have to compete with filmstars and cricketers, and fail miserably. The Indian public has been fed on a staple of Hindi cinema romances and Hollywood stereotypes of sexuality. If these images are interpolated onto politicians and other public servants, it is difficult to imagine any one of them making love. They just do not lend themselves easily to sexual fantasies. The new crop of young politicians like Rahul Gandhi is yet to be classified as politicians in the conventional sense despite the power or influence they might wield. They are just pin-up boys and girls who will one day metamorphose into politicians.

Then, for most of us, sexual indiscretions are things that other people do. This, of course, has nothing to do with reality. We all share the same fantasies, and pray for the opportunity that someone rich or powerful has had in his sexual life. But a strange concoction of shame and guilt makes us wary of talking about sex. We have a profound discomfort with our bodies, fuelled mostly by the all-pervading voice of some unseen, long-bearded holy man haranguing us about the ephemeral nature of the body and the immortality of the soul. Fed on a confused staple of religion and school-level moral science, we want to believe that, as a people, our destinies lie in doing higher and nobler things. This is a perspective that relegates sex to the realm of the extravagance—and appetitive gluttony—of a few. And these few are seen as exceptions, perverts and deviants. Anyone caught with his pants down is, therefore, a man to be helped and pitied, but not necessarily paraded in full public view.

Public figures also easily get away with the occasional public display of misplaced randiness because of our confused attitude towards power. Men and women who are powerful and wear power on their sleeve are secretly admired and simultaneously despised by us. Our interest in them is greatest, not during the period when they are powerful, but in their eventual fall. This is why we care little about what politicians and bureaucrats do in their bedrooms while they are in power, but respond with unconcealed glee and quiet satisfaction when they fall. For them to be caught in a ‘compromising position’ is, for the public, almost like a ritual act of castration, a neutering of an individual who once mattered but now is of no consequence.

But most of all we are scared of happiness and wary of pleasure. Like money, which is here today and gone tomorrow, we hoard pleasure and sexual gratification for judicious use on a rainy day. Sexual abstemiousness or libidinal parsimony is like a fixed deposit. In contrast, a politician casting his seed recklessly around is similar to a politician having disproportionate wealth. It is a moral flaw, but understandable: he just has a lot to spare and throw around. Any undue interest in his extravagances, sexual or monetary, is hardly a way of enhancing one’s own capital. When a public figure gets caught, the ordinary citizen is relieved that he did not squander his hard-earned savings in a profligate fashion. It, then, seems to be a happy union of arth and kama. Dharma and moksha can always wait.

(Jyotirmaya Sharma is professor of political science at the University of Hyderabad.)