Where Angels Fear To Fjord

The $1.6-billion Sawalkote project could outdo Enron twice over 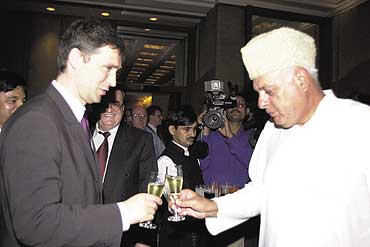 outlookindia.com
-0001-11-30T00:00:00+0553
What can you say of a $1.6-billion (Rs 7,360-crore) power project planned in Jammu and Kashmir? That it is one of the biggest investments India has garnered in a single project? And that it would help further investments by multinationals in the strife-torn valley? But in reality, the 600-MW Sawalkote hydel project planned on the Chenab river in terrorist-infested Doda district could become a serious embarrassment for the government.

Why? The agreement was signed by Henning Fjeldstad, executive vice-president of ncc International AS of Norway (which, along with Germany's Hochtief AG, will execute the turnkey project) and representatives of the Jammu & Kashmir Power Development Corporation (jkpdc) late last month in the presence of the visiting Norwegian prime minister, Jens Stoltenberg, state CM Farooq Abdullah, his son and Union minister of state for commerce Omar Abdullah and senior state officials.

Conspicuous by their absence were power minister Suresh Prabhu and his top brass. And ironically, the minister was at the same venue barely half an hour before the signing ceremony, attending an Indo-Norwegian power seminar. But why would not a Union minister attend the signing ceremony of one of the biggest investments in the Indian power sector? And why would power secretary A.K. Basu refuse comment, saying he has little knowledge of the project? And why would Stoltenberg refuse to list it as one of his achievements during his interview to Dagens Industri, Sweden's leading economic daily?

The first jolt came when Norwegian Radio broadcast an interview with Arundhati Roy wherein the author-activist spoke of the dangers of the Sawalkote project, which involves the construction of a 185-metre, seven-radial-gate concrete dam. Roy's concerns revolved primarily around environmental issues, especially since Stoltenberg had said—following the World Commission of Dams report—that no further big dams would be constructed in Norway.

Even leaving that aside, there are countless loose ends to the project, first mooted in 1984-85 and then forgotten till Abdullah resurrected it a couple of years ago. Under the agreement signed by ncc International and jkpdc, the epc (engineering, procurement and construction) contract value is $660 million and the total cost of the project $1.6 billion. As per the agreement, the Norwegian consortium is expected to raise 85 per cent of the money. But in reality, the burden lies squarely on Indian shoulders.

For example, highly placed finance ministry sources told Outlook that the Norwegian consortium has promised only $220 million from Norway's Ekspord Finas (Export Finance Organisation). And that too—as per Ekspord Finas' communication to the finance ministry and jkpdc—only after Indian state-owned financial institutions (FIs) counter-guarantee the same. Three of them—the Industrial Development Bank of India (idbi), State Bank of India and Power Finance Corporation (pfc)—have already agreed to fund the $450-million rupee finance part of the project. Of course, they don't get a counter-guarantee. Add to this $435 million of external commercial borrowings, again counter-gauranteed by the three FIs. Another $180 million will have to be raised by jkpdc. But since jkpdc is cash-strapped, the Norwegians have agreed to help raise the same. At a counter-guarantee.

Interestingly enough, on "the official website of the Jammu and Kashmir government", www.jammukashmir.nic.in, a news report dated February 13 reads: "(Chief minister) Dr Abdullah said since the Norwegian consortium has not insisted for the counter-guarantee, the Sawalkote project has also been assigned to them."

Fjeldstad argues that counter-guarantees are de rigueur in power projects, especially in politically volatile regions. "It is a common practice worldwide. As to why the Indian firms have agreed to fund the project, the question should be posed to them," he says.

Reminded that representatives of Stockholm's Nordic Investment Bank (nib) met senior finance ministry officials to inform them about being approached by ncc for funds as low as $80 million and that they would require a counter-guarantee from the Indian government because of the risk involved, Fjeldstad said ncc's negotiations were still on with nib: "If they have asked for a counter-guarantee, what's wrong?"

The Indian institutions are tight-lipped about these huge investments. "It's not our policy to make statements on specific investments," says idbi's spokesperson, refusing to comment on what could eventually be one of the largest exposures of the bank. "We've not finalised all details and cannot tell you more," says pfc general manager M.K. Goel. But isn't all funding landing at the doors of Indian companies? And when a foreign bank (read nib) is not ready to risk even $80 million, why would Indian FIs risk such huge amounts?

The answer of course is that Indian FIs are being forced into funding Sawalkote, which will be touted as a great employment-generating measure for the troubled Valley. In other words, this is social sector funding by another name. But even if we accept that, is this the right project to fund?

Fjeldstad says a comprehensive environmental study the consortium commissioned showed the region was sparsely populated. But by its own admissions, Norplan AS (the Norwegian environmental organisation contracted by jkpdc for the feasibility report) admits its study can't be classified as a full eia (environment impact assessment) but just "a forerunner to the eia because we could not visit all the project downstream areas due to security reasons and that a rehabilitation plan remains to be carried out. It is estimated that around 200 to 220 houses…will be flooded and probably over 1,000 people will be displaced."

And what about the cost of the project? What about competitive bids? Highly placed sources in the power ministry say no bids were asked for. Fjeldstad says ncc was awarded the contract because of its past experience of working on similar projects in the Valley. But sources admit some others—including the Delhi-based Jaiprakash Industries—expressed interest in the project and offered substantially lower prices but were not considered. (Jaiprakash officials refused to comment.) According to global analysts, hydel power project costs normally hover around Rs 3-3.6 crore per MW. But Sawalkote is logging in at about Rs 12 crore per MW. This seems huge, even taking into account the difficult terrain, where ncc will have to spend the first two years simply building access roads to the site. Even the allegedly overpriced 2,100-MW Enron project is being constructed at a cost of $2.8 billion or Rs 6.1 crore per MW.

Tensions have emerged also on the crucial issue of levelised tariff price (ltp) at Rs 3.60 per unit as per the contract. Power ministry regulations categorically say no ltp can be finalised unless a power purchase agreement (ppa) is signed. And till date, the jkpdc has not signed any ppa. Besides, how can a power project worth $1.6 billion have such low tariffs? Experts argue that power from Dulhasti in the same Chenab valley is projected to come to a massive Rs 11 per unit (because of huge cost overruns; Dulhasti is now in its 18th year of construction!).So who will pay the extra price, especially at a time when the j&k power board admits to finding it difficult to collect at even Rs 2 per unit? "This will be the next step and we will finalise it soon," adds Fjeldstad.

Environmentalists quote the Norplan report to highlight a serious crisis of sedimentation which has often plagued such projects in the state. The report says sedimentation will be extensive throughout the reservoir, despite the impoundment of the Baglihar reservoir upstream. Besides, recent sediment transport, land use and soil erosion changes have not been registered, it says, adding that previous estimates must be considered uncertain. "There is clear admission the project will have huge sedimentation problems and yet the document says nothing about what needs to be done," says Himanshu Thakkar of the South Asian Network of Dams, Rivers and People.

At this point, Sawalkote looks suspiciously like a political project that will make money for everyone except Indian financial institutions. But who gives a dam for them?