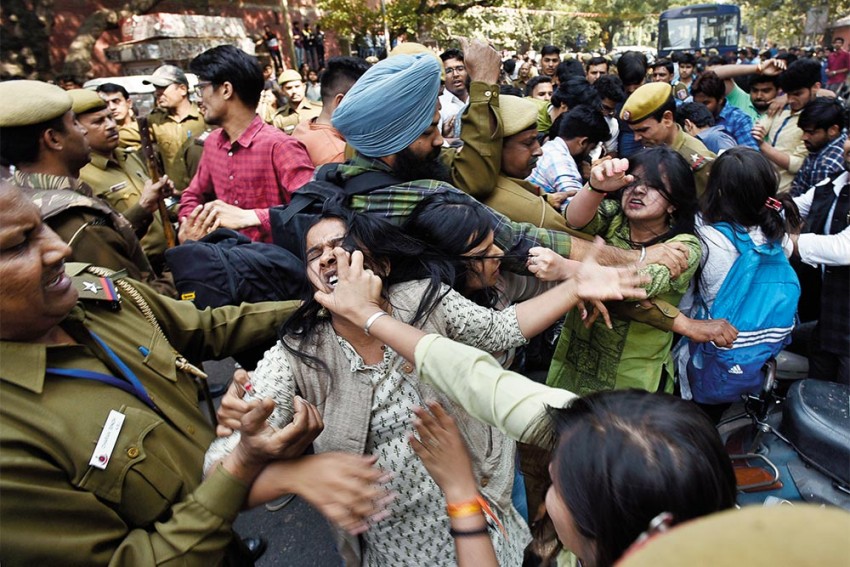 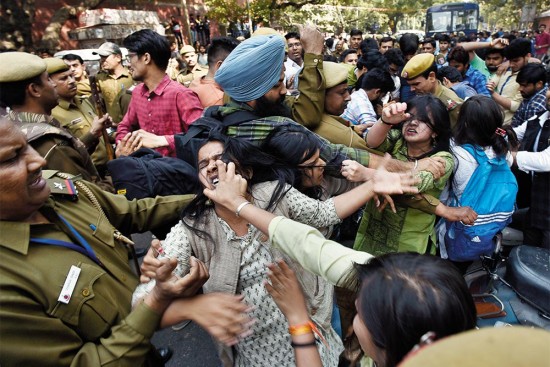 If one way to measure events is to see which side derived more mileage from it, you could perhaps judge the Delhi University affair by one fact. What was supposed to be a few people in a room talking—a seminar titled ‘Cultures of Protest: Unveiling the State: Regions of Conflict’—ended with a sight quite apt to that title. Over 5,000 students, many of them previously unaffiliated, marched in the streets to insist on the right to freedom of speech and thought in academic institutions.

That was in response to days of viole­nce, both physical and online—and a deb­ate gone national, with politicians, ex-cricketers, film personalities and TV anchors logging in. A parallel argument over nationalism and free speech centred around another DU student, Gur­mehar Kaur. In a little over a year since the JNU controversy, another campus in the national capital had turned into a battlezone, with antithetical ideologies locked in a slugfest. Counting the Rohith Vemula suicide in Hyderabad, the Draupadi episode in a Haryana campus and the faculty brouhaha at Ashoka, a pattern of crisis can be traced. The Indian ‘university’ itself has come to resemble what the Ramjas seminar’s subtitle ref­erred to as a “Region of Conflict”.

It was to have been a quiet session org­anised by the Ramjas College Literary Soc­iety beginning on February 21, but the stones started raining down on the window-­panes before anybody could speak. Supporters of the Akhil Bharatiya Vidyarthi Parishad (ABVP) massed outside were averse to Umar Khalid, former member of Democratic Students Union (DSU) at JNU, being invited as a speaker.

Khalid, who was arrested last year over a controversial programme on Afzal Guru’s hanging and faces sedition cha­rges, was to present a paper titled the ‘The War in Adivasi Areas’, based on his PhD project. He was finally told to stay away—in negotiations that delayed the event by two hours, the organisers got the go-ahead only on that condition. But the stone-pelting started anyway, as soon as the first speaker, documentary maker Sanjay Kak, began speaking. The seminar was called off and everyone escorted out.

The next day, when students and teachers from DU and outside, including many from the left-leaning student union AISA, congregated to protest against the violence, it became a free-for-all with ABVP supporters targeting not just them but also media persons. Many were inj­ured, inc­lu­ding Prasanta Chakravarty, an ­assi­stant professor of English in DU (see ‘How DU was baptised in ABVP fire’).

Amid all the outrage over what was read as a bid to curb free speech, Gurmehar, an LSR student and daughter of an army captain killed in action in Kashmir, registered her protest by uploading her picture on Facebook, as part of the Save DU campaign. In the picture, she carried a placard which read: “I am a student from Delhi University. I am not afraid of ABVP. I am not alone. Every student of India is with me. #StudentsAgainstABVP”.

The image drew notice on social media and then a frame from a one-year-old video of hers too went viral. “Pakistan did not kill my dad, war did,” said the words on her placard, part of a series she held up in sequence. It elicited an avalance of sharp reactions. “Who is polluting this young girl’s mind?” tweeted Union MoS for Home Kiren Rijiju. BJP MP Pratap Simha compared her to Dawood Ibrahim, ex-cricketer Virender Sehwag mocked her words in a tweet and actor Randeep Hooda too joined in. The invective and abuse from trolls were harsher—she even received an online rape threat.

“This is all my 20 year self could take,” Gurmehar tweeted, opting out of subsequent protests and left for her home in Punjab, while others defended her right to speak her mind and condemned the abuse. With Sikh bodies such as the SGPC too coming out in her support, BJP leaders took on a more guarded tone. Union law minister Ravi Shankar Prasad, in a remark mildly chastising of Rijiju, def­ended her right to free speech and thought as long as nationalism remained inviolate. As for Viru and Hooda, they had verbal rebuffs in store from lyricist Javed Akhtar, actor Atul Kulkarni and even Gautam Gambhir, Viru’s former partner on the cricket field.

The debate on nationalism aside, the university as a special zone meant to cultivate free, novel thinking, unencumbered by popular notions, is ­itself at stake. Campus violence is nothing new in India: there have been protracted phases of convulsions over the decades, with neither left-wing nor Congress-backed student unions being squeaky-clean and blame-free. The difference in the present phase, though, perhaps is its nationwide span, and its direct and explicit bearing on free speech issues, as it manifested at DU, JNU and elsewhere.

The developments have prompted obs­ervers to wonder whether the space for dialogue had shrunk in recent times, esp­ecially since the NDA stormed to power at the Centre. “The BJP feels sev­erely empowered now and what’s happ­e­ning is like what Bush did in Iraq—either you are with me or with them,” says Prof Bidyut Chakrabarty of DU, who believes the space for dialogue should never be forfeited, even though freedom of exp­ression comes with constraints.

He says once student politics was evenly balanced among followers of Gandhism, Lohiaism, the mainstream Left and so on, and the leaders always kept the space for dialogue open. He traces the “massive breakdown” of today all the way back to the Naxalite movement. “The transition from personal to political journey was destroyed by the Naxalite movement and this has evolved in national politics,” he says.

When dialogue was possible despite ideological rifts, there was less space for violence and negativism, says NCP leader and former JNUSU president D.P. Tripathi. But universities as an institution have started declining, and this he maps out in the gangsterism and money power present now. “What the SFI did, now the TMC is doing in Bengal; it’s tit for tat. In a democratic culture, there’s space for dialogue. Once there is violence, gangsterism gradually replaces politics.”

Anand Kumar, another JNUSU former president who later taught at the same university, believes anti-dialogue violence is a disease that’s now spreading in the name of ‘nationalism’. Many critics of the BJP government also see the Ramjas incident as a specific one, though part of the general trend, and link it to the UP election—part of a strategy to polarise votes in the last leg. Historian Irfan Habib sees in the DU episode a mirror image of right-wing politics at the national level, which is “imposing something on the whole country by hooliganism”. That is “not normal student politics”, he adds. CPI(M) politburo member Prakash Karat cites a pattern evolving across central universities, be it DU, JNU, Hyderabad or Pondicherry, and talks of an RSS design.

Jay Prakash Majumdar, former Con­gressman and now a West Bengal BJP leader, begs to differ. “In India, ­unless you have Left leanings, no one will call you an intellectual. I don’t blame students for this; I blame ex-students who have become thinkers, professors and politicians. They are like Dr Jekyll and Mr Hyde; they inculcate the idea that one day there will be a revolution. That’s why violence continues and the space for ­dialogue is shrinking.”

Gladiators In The Data Ring