A recent immunisation drive in rural Bihar went horribly wrong. What all ails the health mission? 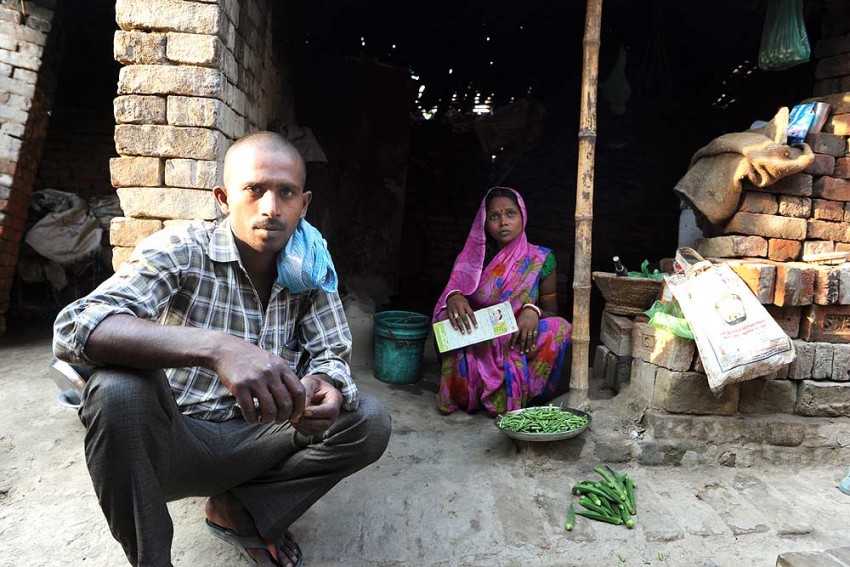 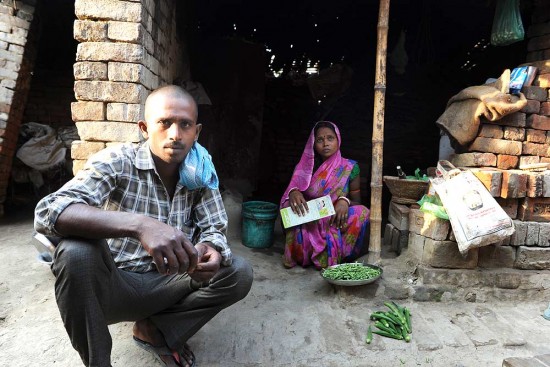 Under the bright summer sun, melan­choly pervades Pat­ori in north-west Bihar. If the lush lit­chi plantations across Muzaffarpur district are in anticipation of pre-monsoon showers, the people of this village in Aurai block are waiting for justice, having suffered an unexpected tragedy this month. They lost three babies, allegedly due to complications in vacci­nes administered for measles and Japanese encephalitis. Altogether nine children between the ages of 12 to 18 months fell sick after being served with the preparation under the union government’s universal immunisation programme (UIP).

Of the three children who died, Sonu Kumar and Raja Babu reportedly fell sick within hours of being administered the vaccines. “Their arms turned black,” says Gunaur Sahani, the father of Sonu Kumar. “They had high fever and vomited several times after the vaccination.” Sahani claims he got no response to rep­eated calls to resident ASHA (acc­redited social health activist) worker Shakuntala Devi. Finding little improvement in the children’s condition till the wee hours of the next day, the families rushed the children to the nearest government hospital. It was a two-hour ride on bikes. Both the children were declared dead on arrival.

Within 24 hours, ten more vaccine-­administered children in the village got unwell and were rushed to hospital. All the children were kept under supervision at the Sri Krishna Medical College and Hospital (SKMCH) in Muzaffarpur, where the third child Rohit Kumar lost his life. The other nine were prescribed antibiotics and sent home the next day. Dr Braj Mohan, the paediatrician who had treated the children, dubs it a case of “mass panic”. “They were brought to the hospital after the death of the first two. Most of them showed mild reaction to the vaccines; they were perfectly healthy,” he tells Outlook.

Leela Devi, whose five-month-old daughter was amongst the children taken to the hospital, says little Puneeta suffered from fever for four days. “Her arm remained swollen and black,” she adds.

The 1985-launched UIP aims at immunising children below 16 years against common preventable diseases. In rural areas, the vaccines are administered by the auxiliary nurse midwives (ANMs) and ASHA. These workers at the primary health centres (PHCs) also create awareness about the need for vaccination.

A visit to Patori throws up several questions on the May 5 handling and administration of the vaccines. The drive took place at 3 pm when the temperature hit almost 40 deg­rees Celsius—amid humid conditions and no air-condition facilities for storage. Seasoned health worker Urmila Kumari says vaccines are usually administered early in the day, starting from 8 am. “Once out of the cold storage box, the efficacy of vaccines deteriorates swiftly and the midday heat and humidity hastens the process,” adds the native of Kaparpura village, also in Muzaffarpur district, who has been an ANM for two decades. 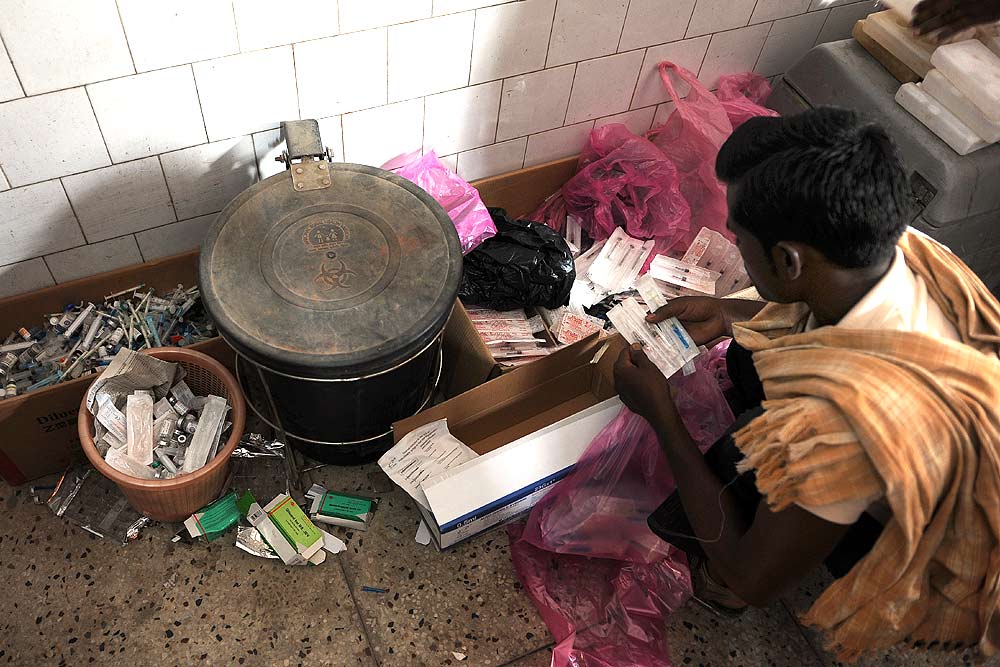 Angry Patori villagers allege both ASHA and ANM workers didn’t change syringes while administering multiple vaccines to the children and pregnant women. Renju Devi, who recently gave birth to a son and had gone to the ang­anwadi on the vaccination day to get her shots, alleges that the health worker used the same syringe to administer her two vaccines. Unless specifically approved, this is not medically recommended. For, reused needle-­tip can weaken, break up and get under skin. Also, it need not be clean, and can cause pain as well as bleeding.

Experts as well as other ANMs believe that the deaths were caused due to the spoilage of the vaccines—a result of break in the cold chain. Vaccines require a rigorous mana­gement protocol that warra­nts their storage within the temperatures of 2 and 8 degree Celsius. Outlook followed a vaccine drive at Kaparpura village, not far from Patori, to see if the protocol was being actually followed. 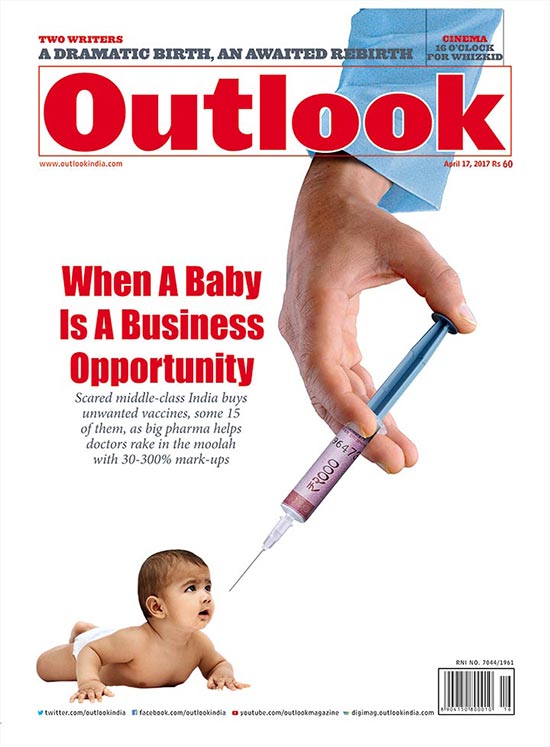 Outlook had last month reported how immunisation programmes for children has become a money-spinner.

The freezers in the Kanti PHC, from where the vaccines come, are maintained to optimum temperatures, but the resident officer in charge of the cold chain says the area has serious electrical issues. “We have two backup generators for the freezers, but power supply is extremely erratic,” she says. “It goes off for even 12 hours at a stretch.” The ice tiles used to line the boxes used for transporting the vaccines by bicycles can melt. Vaccines stay efficacious only for 5-6 hours once put in the ice box, says a PHC officer.

For the programme under the union ministry of health and family welfare (MoHFW), both measles and Japanese encephalitis vaccines come in vials of five doses each. According to Dr Arun Shah, a paediatrician in Muzaffarpur, all five doses need to be mixed with distilled water. “The vial is then viable for use for four hours,” he says, adding this is probably where things went wrong in Patori. Another possibility, according to ASHA workers and ANMs, is the mishandling of vaccines. “Maybe the ANMs mixed the vaccines unscientifically with distilled water or did not administer them correctly,” says Urmila.

Residents of Patori have also raised questions about resident anganwadi worker Parvati Devi, who has reportedly absconded the day after the vaccine drive. The villagers say their relationship with the worker had not been cordial since she refused to give children the food under the anganwadi programme. “She also did not respond to the several calls we made that night the children fell sick,” says Ram Parvesh Sahani, who lives in the interior village.

The children’s deaths prompted the villagers to lodge two FIRs at the Aurai police station. They also registered a complaint with the local MLA Surendra Kumar. “The police investigation is underway,” Kumar tells Outlook. How did the deaths happen? Kumar insinuates it probable mishandling of the vaccines.

Muzaffarpur district magistrate Dhar­mendra Singh has ordered the sus­pens­ion of immunisation officer Shiv Shankar. Four other district health officials got a day’s pay cut. The civil surgeon in Muza­ffarpur’s Sadar Hospital that houses the cold chain for vaccines in the area says no conclusive evidence for the cause of death has been uncovered.

A fact-finding committee constituted by the MoHFW visited the pertinent PHC. Vaccine samples used during the drive have also been sent for investigation and the bodies of the three children were sent for autopsy. The autopsies were conducted at SKMCH, but the cause of death still rem­ains unknown (though some on the team attribute it to cardiac arrest). Worse, the bereaved parents claim they were asked to pay Rs 700 each to take back the bodies of their children for burial. The autopsy reports that they got do not mention any cause of death or eff­ects on the organs.

Dr Bipin Kumar, head of the state for­ensics department, says all essential organs of the three children have been sent for chemical analysis and histopathology. “The chemical analysis and histopathology reports take up to 15 days to process before which we cannot identify cause of death,” he tells Outlook. Pradeep Haldar, deputy commissioner (immunisation) with the union ministry of health that sent the fact-finding committee, states the probe will take time.

While the possibilities for the tragedy are several, almost all agree that the cause of children’s deaths was the vaccine and no external factor. The rep­orts by the special committee as well as police investigations are expected to take a few months. The litchi, known for its sweetness, would taste sour for Patori residents this time.

By Arushi Bedi in Muzaffarpur