When The Saints Go Skulking In 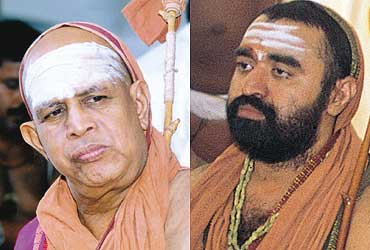 The Kanchi Shankaracharyas, Jayendra and Vijayendra Saraswati, were theoretically free to return to the math after the formal filing of the chargesheet in the Sankararaman murder case on January 21 and copies were given to all the accused on March 31. However, the two math heads preferred to keep away from Kanchipuram till June 8, "an auspicious day". In fact, Jayendra and Vijayendra (accused 1 and 2) have not been seeing eye-to-eye. Serious differences had cropped up after Jayendra’s arrest on November 11 in Mehboobnagar, AP. Jayendra had even bad-mouthed the junior pontiff and his brother Raghu (a co-accused) in a videographed confession.

When the two Saraswatis arrived in Kanchipuram, there was hardly anyone to welcome them—just a handful of devotees, Jan Kalyan members and temple priests. More significantly, outfits such as Mannin Maindar Kazhagam and the Kanchipuram District People’s Forum dignified the event with protests.

Still, with the two Shankaracharyas back, it was hoped the process of sorting out the mess in the math would begin. There was strong speculation that Jayendra was keen on appointing a new Shankaracharya with a clean image—Gnanaprasendra Saraswati. However, math loyalists prevailed upon the twosome to put up a united front in this time of crisis. Jayendra’s earlier public appearance was at a Bharatiya Vidya Bhavan function in Chennai in the first week of May, ahead of the bypoll in Kanchipuram where he appealed to people "to make 14 May a day to remember". The Kanchi math had unofficially backed the All-India Hindu Mahasabha candidate in the bypoll. He lost his deposit, polling just 409 votes.