When Shloka Speaks To Shloka 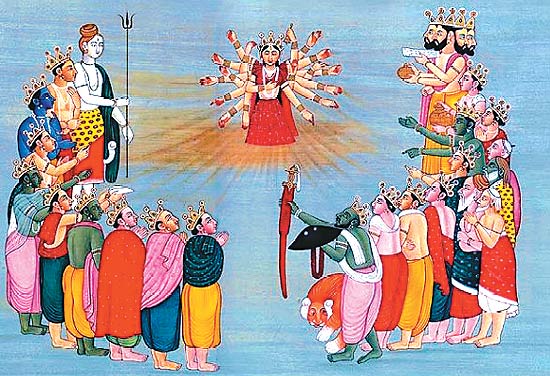 Can one tell a history of the Hindus through their stories? That is the challenge that American scholar and Sanskritist Wendy Doniger sets herself in this book, a culmination of many years of teaching and engagement with Hindu thought and writing. One thing those years have made clear to Doniger is the difficulty of defining Hinduism. The term itself lacks any roots within India—only after the seventeenth century can we find the first usage of the title ‘Hindupati’ or Lord of the Hindus—and there is no agreed doctrine, founder, or church-like institution with which it is identified. There is no Hindu canon. Nor do the Hindus themselves form a race, or inhabit a narrowly specified territory.

What does connect them and set them apart, Doniger argues, is the fact that their imaginations, and many of their social practices, are structured by a vast web of stories—texts that spin across and through the languages and cultures of the subcontinent. Doniger calls it ‘intertextuality’, the self-conscious reference to stories that came before, all the way back to the Rig Veda. And from there on, the Brahmanas, Upanishads, Mahabharata, Ramayana, Shastras, Puranas, Tantric texts, the philosophical schools whose networks extended from the Tamil South up to Kashmir, the poetry and song of the Bhakti movements. There is no comparable output in any of the other great instances of the moral and religious imagination still available to us today.

Such texts can’t, however, be read as open windows on the societies that produced them. We don’t even know when some of the most fertile Hindu texts were composed. The Mahabharata and Ramayana, for instance, can only be dated to some time between 300 BC and AD 300 and 200 BC and AD 200 respectively. Still, Doniger is interested in the tensions between history (what exactly happened) and what societies tell themselves about what is happening. Her passion is the human imagination.

Doniger calls her book an ‘alternative history’ because she believes the other histories overemphasise the Brahminic wellsprings of Hindu stories. She argues, effectively, that the ‘high’ texts have quite often fed off low tales. She shows in particular how the voices of women, Dalits and tribals have energised many Brahminic scripts. So too, she makes us hear the voices of Buddhist and Jain thought, and later of Islam and Christianity, in dialogue with the Hindu texts. Just as those lower in society sought to Sanskritise and Kshatriyise, so the Sanskrit texts were permeable to what she terms ‘deshification’—the absorption of local, ‘small’ traditions.

Doniger’s capacity for a ‘shlesha’ of empathy and criticism fails in her treatment of Hindutva, though she pokes fun at it.

She draws out the layered cruelties and conflicting natures of Hindu texts with verve, among them the story of Ekalavya, the expert tribal archer in the Mahabharata. He displays his skill by unleashing arrows into the mouth of a dog. Arjuna, outraged that someone of lower caste can do this and threatened by his prowess, tells Ekalavya’s guru, Drona, to put a stop to it. Drona requires Ekalavya to cut off his thumb, which he does. The story reveals and revels in the injustice of caste. But Doniger also cites other versions—for instance, a Jain text in which Arjuna is shown as cruel and vindictive. These constitute what Doniger calls the ‘intertextual’ argument and conversation of the Hindus—with the Mahabharata as a central clearing house for this vast network of disputation. One of her arresting comparisons likens the Mahabharata to ‘an ancient Wikipedia, to which anyone who knew Sanskrit...could add a bit here, a bit there’.

But the central insight driving her argument concerns the Hindu way of telling stories, a capacity to make not just art, but ethics, out of ambiguity. It’s a characteristic embodied in the Sanskrit figure of speech known as ‘slesha’. Slesha—literally ‘embrace’—holds together at once two different stories or images, allowing the listener or reader to switch between them. This is essentially a metaphoric capacity: to see something as something else. It also offers a way out of any impasse. As E.M. Forster put it, ‘Every Indian hole has at least two exits’.

In such a universe, meaning is never settled—and so, neither, is authority. Claimants to authority, from the gods themselves to the human scribes who record their doings to modern-day gurus who hold forth on the texts, climb up ladders but also slide down snake chutes. This fosters an internal pluralism: within the individual, the possibility of internal conflict between the demands of society’s moral code and a more universal ethics is never resolved or far from the surface. The recognition of ambiguous meaning also enables, though in more complex and sometimes attenuated ways, an attitude of pluralism towards other moral cosmologies and religions.

The eighteenth century Scottish philosopher, David Hume, put this capacity for pluralism down to polytheism, a religious view that saw nature as distinguished not by order and beauty, but “by the various and contrary events of human life”. “So sociable is polytheism,” wrote Hume, “that the utmost fierceness and aversion which it meets with in an opposite religion is scarcely able to disgust it and keep it at a distance”. Now, this sociability is hardly one that would guarantee survival in a biological species; and polytheism has been a characteristic mainly of ancient religions, which rarely got beyond the lower branches of the Darwinian tree of human belief systems. Why, then, has Hinduism been able to survive, with some vigour, across such a span of human history? Some, of course, over the past century and more have feared that it possibly cannot—and have hoped to make Hinduism more mono in its theism.

It’s precisely the capacity of the Hindu imagination to keep telling and re-telling stories, rather than to box them up into a single authorised narrative or code, which has kept it in business—and enabled it to flourish within a society at once of great internal complexity and which has also regularly encountered tough external pressures.

Doniger takes an obvious joy in the stories she analyses, and one of many pleasures in the book is her consideration to animals in the Hindu world—as objects of sacrifice, consumption, devotion and protection, sometimes all at once. The idea of non-violence, ahimsa, is first developed in relation to the treatment of animals—a matter of public concern to rulers, who encouraged forms of casuistry to justify animal sacrifice. The cow, of course, figures. But Doniger more interestingly tracks the importance of dogs. The Mahabharata, she notes, begins and ends with stories about justice for dogs. She also brings the horse back to the centre of the Hindu imagination. From the great Ashvamedha sacrifice, described in shudder-inducing detail in the Vedas, to the raging hooves of Kalki, it is the horse—an animal not native to the subcontinent—that has fascinated Hindus.

But for all the delights in Doniger’s scholarship, there is a deeper question she might have done well to confront. How did the Hindu capacity for moral pluralism actually stand in relation to Indian society? Doniger notes and celebrates the presence in many texts of challenges to hierarchy and caste. She shows that caste was not invariably an intellectual or philosophical prison. It was possible to think oneself out of it, to criticise its injustice, mock its absurdities. But she doesn’t probe a central paradox: Why did such critical thoughts and stories gain such little purchase on the social order? The astonishing plurality of Hindu thought—its vast ocean of polydox beliefs—is only matched by its equally staggering orthopraxy, the unchanging rigidity of social patterns and practices. The old Hindus seem to have perfected ‘repressive tolerance’ well before Herbert Marcuse discovered it in California.

Similarly, Doniger sets out but does not fully unravel some of the central dilemmas embodied in texts like the Mahabharata. The Mahabharata poses the problem of the world’s moral irrationality. If the concept of Karma appears to suggest a rational moral economy—that my present action will have a future pay-off—this idea is constantly subverted in the Mahabharata, where one more throw of the dice again and again determines the moral horizon. “The Mahabharata sees a vice behind every virtue, a snake behind every horse, and a doomsday behind every victory,” Doniger writes, and so every moral choice and act is somehow the wrong choice. In fact, the notion of Karma so diffuses the location of merit and de-merit, makes them such mobile and transferable qualities that it is impossible to track causality. Sinners too, can go to heaven, despite their intentions—if they happen simply to be in contact with some salvaging ritualistic practice. What sort of moral universe can be sustained if there is such a weak relation between intention and consequence?

More disappointing in this important book is Doniger’s treatment of recent history. Kipling and Foster are her orienting stars in discussing the colonial period, and she conveys little sense of the intellectual ferment in India at the time—the many experiments with religion, politics, caste, and the different meanings that Hindu ‘reform’ came to hold. This leads directly to the book’s greatest weakness—the absence of any serious explanation of Hindutva. Doniger has a potent—indeed, quite felt—sense of its presence and projectile capacity, and has had occasion to reflect on it. But while she has roustabout fun at the expense of the adepts of Hindutva, she doesn’t stop to ask what it is about the potentialities within Hinduism, and what it is about the Hindus at this point in their history, that have conspired to breathe life into such versions of Hinduism. Her capacity for ‘double vision’, for empathy and criticism, here fails.

Doniger is an unstoppable teller of tales and a brilliant interpreter of them also. Yet, occasionally, one feels that, rather than delve deeper into the contradictions of history, she too, like her subjects stretching back many thousands of years, prefers just to tell one more story.