When People Taste The Wind

Gaddafi may hang on by his fingernails still. But the longer he stays, the worse for Libya. 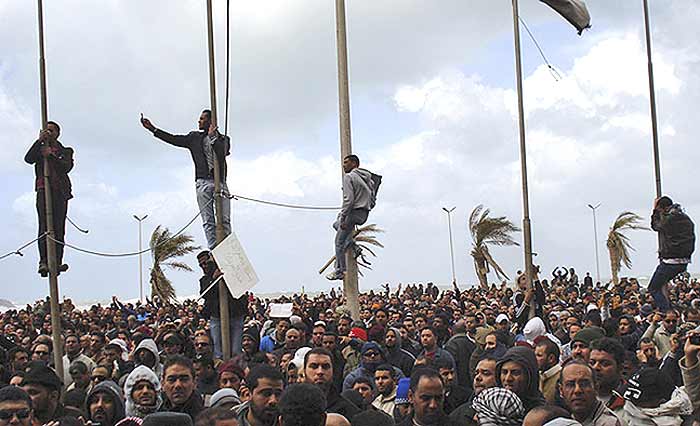 I should make a disclosure before I write on the tragic situation in Libya, a country I have visited frequently and have a special affinity with. Libyan leader Muammar Gaddafi espoused the political ideology of African unity that was first mooted by my father, the Ghanaian leader Kwame Nkrumah. Millions of Africans from south of the Sahara—comprising 48 countries and together described as Black Africa—flocked to Libya in search of jobs. Today, as Libya is embroiled in a civil war, Africans residing in Libya are being used as cannon fodder and mercenaries to thwart the uprising of the Libyan people against the Gaddafi regime. The Libyan air force has flown in Black African soldiers of fortune, who are reportedly beating protesters to a pulp as the regime charges dissenters with treason, a capital offence—something Gaddafi did not tire of saying repeatedly on TV.

Yet the eastern half of the country, including Libya’s second largest city, Benghazi, has fallen to the anti-Gaddafi protesters. The pre-Gaddafi red, black and green tricolour with white crescent and star has been hoisted over the liberated cities of eastern Libya. Fierce fighting has commenced in the western cities of the country, including the capital Tripoli. Many Libyans have lost their livelihoods. Thousands are living in tents and makeshift housing on the edge of the bombarded cities. Hospitals are close to running out of basic medicines. A humanitarian disaster looms large.