The East-West pollination continues in music. But 1967 was a watershed year incapable of an encore. 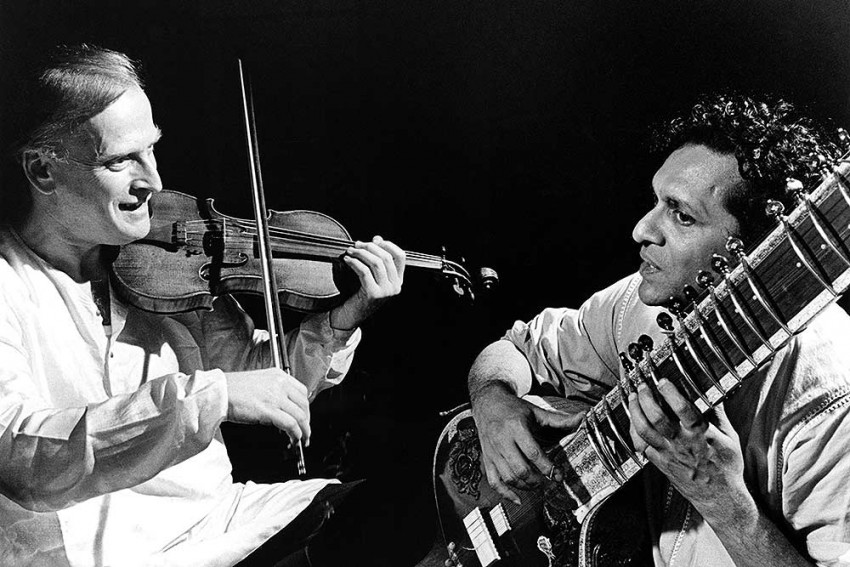 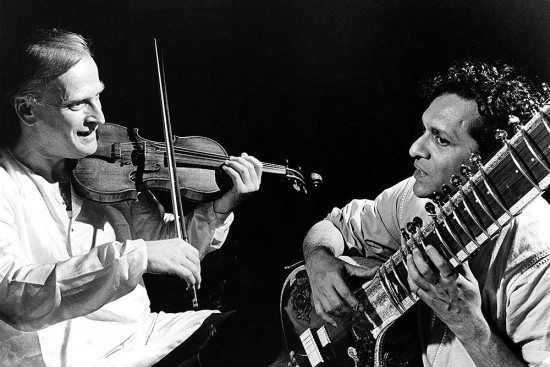 When we look back half a century, we have quite a few reasons to celebrate. The year 1967 strings historic events, where Indian music had a significant impact on Western music and culture. Western violinist Yehudi Menuhin’s collaborations with sitarist Ravi Shankar on West Meets East; George Harrison’s use of sitar and Indian musical forms on Within You Without You from the Beatles LP Sgt. Pepper’s Lonely Hearts Club Band; and Duke Ellington’s assimilation of Indian melody into his Far East Suite. Astonishingly, all three of these ground-breaking albums would win Grammy awards in their respective categories.

In 1959, Yehudi Menuhin assumed artistic responsibility for the annual Bath Festival, one of Britain’s most prestigious classical music festivals. In his first year at Bath, Menuhin invited Ravi Shankar to perform a set of Indian music at the festival. The response was positive, and Ravi Shankar would return to Bath as a solo perfor­mer throughout the early ’60s.

But Menuhin, shortly after he turned 50 in April 1966, was appointed full-fledged artistic director of the festival. He decided to mark the occasion by grasping new challenges. Not only would he conduct his first opera, Mozart’s Cosi fan tutte, at Bath, Menuhin would also take the plunge into the improvisational and microtonal language of Indian music by performing a sitar-violin duet with Ravi Shankar on June 25, 1966. The collaboration seemed inevitable at some point: at their first meeting in 1952, both men realised that although they came from different worlds, their commitment to music was very much the same.

The success of the Bath performance would prompt EMI to express interest in recording the duo for the first of three LPs in a series entitled West Meets East. The two would rec­ord a performance of raga Tilang, with a Ravi Shankar composition entitled Swara Kakali. Ravi Shankar also composed a piece solely featuring violin and tabla entitled Prabhati, based on the morning raga Gunkali, made famous by master vocalist Bade Ghulam Ali Khan (1902-68).

West Meets East would win the 1967 Grammy for Best Chamber Music Performance. Two more instalments of West Meets East would follow, the second volume released in 1968, and the third in 1976. The second volume would include the same composition based on raga Pilu that Ravi Shankar and Menuhin performed for the United Nations in New York City, in celebration of Human Rights Day on December 10, 1967. This historic performance was televised around the world, making Ravi Shankar and Alla Rakha the first Indian musicians seen by a worldwide audience. It was yet another milestone for Ravi Shankar, Menuhin, Alla Rakha and for Ind­ian classical music as a whole. As one of the most respected Western musicians of the 20th century, Menuhin’s endorsement of Indian music carried enormous weight, going a long way towards dispelling the notion that it is less sophisticated or challenging than Western classical music. 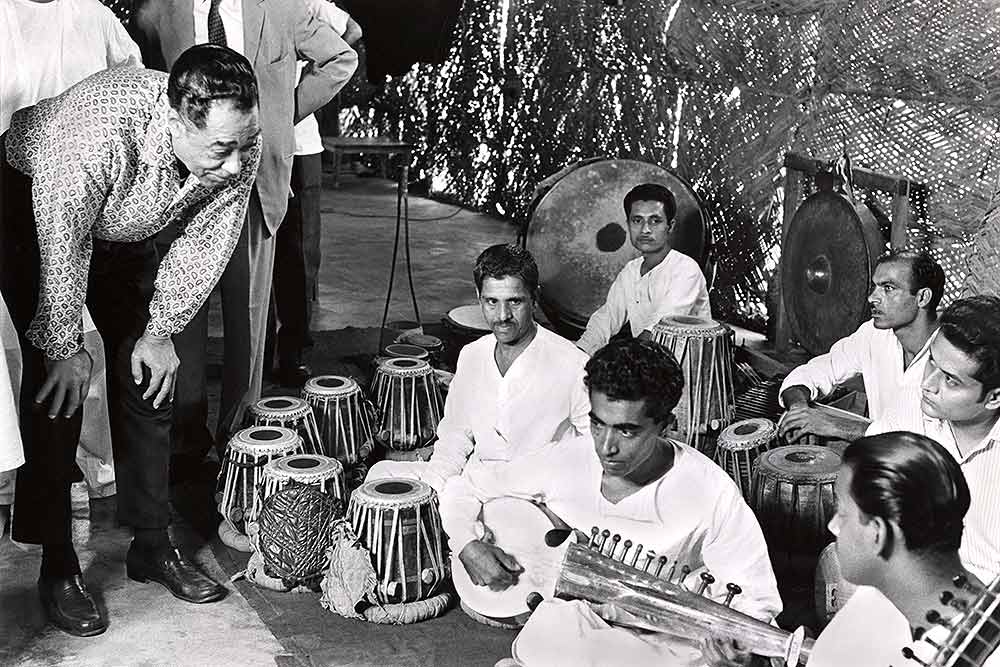 Duke Ellington would visit India with his band in October 1963, as part of a three-month US State Dep­artment tour. By this time, Indian music had already begun filtering into the jazz vernacular, beginning with Brubeck’s Calcutta Blues and continuing with the work of Yusef Lateef and John Coltrane, as well as Ravi Shankar’s collaboration with Bud Shank.

Ellington was certainly intrigued by Indian music. Although he himself did not engage in jam sessions with Ind­ian musicians, he absorbed the music with his typically inq­uisitive mind. Ell­ington and his orchestra landed in ­Delhi on September 21, 1963, after already visiting parts of the Middle East over the past two weeks. They would remain in India for exactly one month until October 21. The last stop in India was Calcutta on October 13, where the band performed several nights in the main courtyard of the Grand Hotel, which is also where they stayed for the week. During an intermission of the first show in Calcutta, Ellington was introduced backstage to sarod player Ali Akbar Khan,  son of Baba Allauddin Khan, Ravi Shankar’s guru.

After a few months to recover from the tour, Ellington and his composing partner Billy Strayhorn began composing music based on their impressions, and a suite began to emerge. The Ellington band recorded The Far East Suite in December 1966, and the album would be released in early 1967. Every segment of The Far East Suite is imbued with the richness of the landscapes that inspired it, yet every segm­ent is pure, perfect Ellington. Where other composers might have used indigenous instruments to give the work an “exotic” flavour, Ellington and Strayhorn convey an Eastern ambience solely through the tonal palette of the Ellington orchestra.

Although there are no ragas or talas in the suite, Blue Pepper (Far East of the Blues) is an E-flat blues played by Johnny Hodges over a relentless rock backbeat, with the main theme based on a scale that resembles raga Madhukauns. Two of the nine tracks make a more direct reference to India: Bluebird of  Delhi and Agra. The former is one of Ellington and Strayhorn’s more unusual creations, with Jimmy Hamilton’s clarinet imitating the song of a bluebird, or mynah. Agra is a poignant vignette for Harry Carney’s baritone saxophone, painting a melancholic yet majestic tableau of the 17th-­century monument and the man who built it. As Ellington explained in the liner notes, “[Agra] is our portrait of the Taj Mahal, but we take in a little more territory than that marble edifice dedicated to the tremendous love for a beautiful woman. We consider the room in which the man who built it was imprisoned by his son. For the rest of his life he was forced to live there and look out…at the Taj Mahal.”

As a result of Harrison’s tenure with the Beatles, many Westerners continue to associate Indian music with George Harrison. Ravi Shankar’s much-anticipated appearance at the Monterey Pop Festival may not have happened if Harrison hadn’t played sitar on Norwegian Wood, Love You To, and Within You Without You. Certainly, the Concert for Bangladesh in 1971 (the live recording of which also won a Grammy for Album of the Year) would not have taken place.

Moreover, it can be argued that Harrison’s Indian-styled compositions for the Beatles remain the most graceful representations of Indian musical values within Western popular music. Harrison will likely be remembered not only for his role in the Beatles and as a solo artist, but also as the most famous Western musician to recognise the importance of a non-Western musical tradition and give it voice. Like Menuhin, Harrison opened the door to a world of music that many Westerners otherwise may never have discovered.

Harrison first encountered Indian music and spirituality during the shooting of their second feature film, Help! While filming in London in April 1965, a scene takes place inside a makeshift Indian restaurant, with several comically dressed musicians playing Indian classical instruments, including the sitar. Intrigued by the look and sound of the instrument on the set, Harrison picked it up and began examining its weight, balance and sound. Five months later, in September, he would purchase a sitar from a London shop on Oxford Street called Indiacraft. It would take him another month before he would use it on John Lennon’s song Norwegian Wood, and it would be seven months before he would use it in 1966 on one of his own songs, Love You To from the Revolver album.

As the Beatles began work on Sgt. Pepper’s, Harrison assembled a group of Indian musicians at EMI Studios, contacted through the Asian Music Circle, and began rec­ording Within You Without You on March 15, 1967. Harrison would be the only Beatle to perform on the song, once again playing sitar and tamboura, with occasional traces of acoustic guitar. The names of the Indian musicians remained unacknowledged till researchers dug them out recently, which was unfortunate, for the tabla (Natwar Soni) and dilruba (Anna Joshi) in particular were performances that deserved acknowledgement. Beatles producer George Martin enlisted a Western string section of eight violinists and three cellists to be recorded at a later date (April 3). Within You Without You is a survey of Indian classical and semi-classical styles. Harrison had obviously spent much of his free time not only practising sitar, but absorbing as much Indian music as possible; the diverse elements introduced in the song are skilfully woven together into an interesting hybrid. If anything, the closest comparison that might be made is to the devotional song form of bhajan. 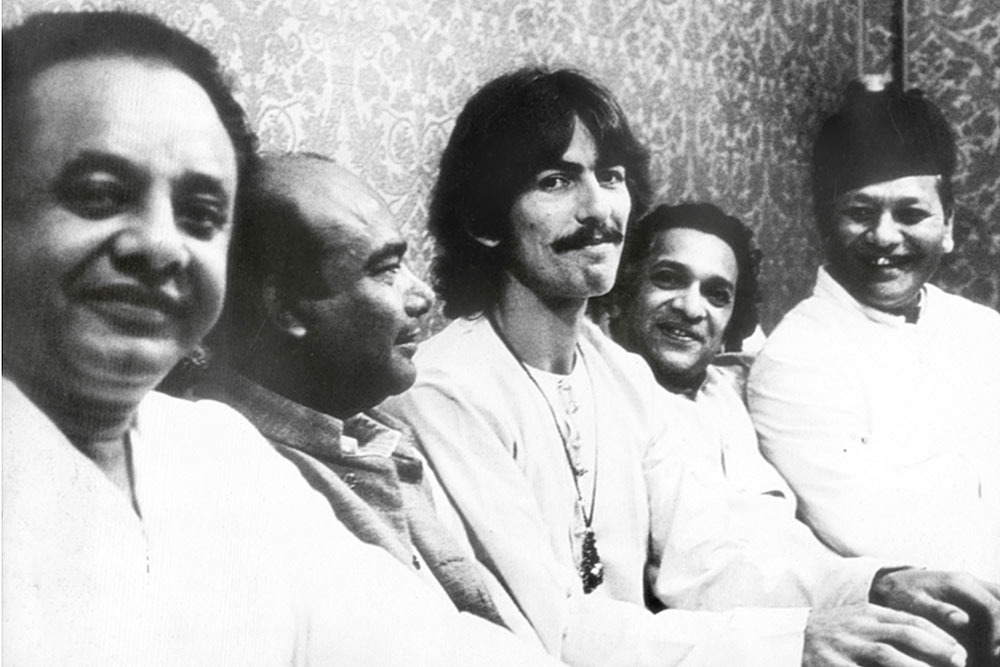 Within You Without You begins with a short alaap, stated by the dilruba. With a quick flourish, the tabla enters and settles into a straightforward 16-beat teental in a relaxed madhya (medium) tempo. The dilruba echoes Harrison’s vocal note for note, as he sings the opening verse:

We were talking about the space between us all,
And the people who hide themselves behind a wall of illusion
Never glimpse the truth,
Then it’s far too late when they pass away.

After this verse, the eleven-piece string section enters with luxuriant swoops and glides before providing richly textured acc­ompaniment to the second verse. George Martin had to take extra care to explain this sliding motion to the Western musicians, who needed to execute it properly in order to convey the Indian style—where the melody is almost always rounded with microtones.

Harrison and the remaining Beatles were all pleased with the recording. The atmosphere of the EMI recording studio had never been so colourful, with a special carpet on the floor, Indian tapestries on the walls, and incense wafting through the air, as the Indian  musicians rehearsed and recorded their parts. Engineer Geoff Emerick was parti­cularly happy with the sound of the tabla, which had been more closely miked than was customary for the instrument, with the beautiful bass tones of the drum especially present in the recording. John Lennon expressed admiration for Within You Without You, citing it as “one of George’s best songs. One of my favourites of his, too. He’s clear on that song. His mind and his music are clear. He brought that sound together.”

On June 1, 1967, the Beatles released Sgt. Pepper’s Lonely Hearts Club Band, a groundbreaking album hailed as their masterwork, setting new standards for composition, instrumentation and production in rock music. Within You Without You was the spiritual centrepiece of the album. Eight months later in February 1968, the Beatles would travel to India for extended study of Transcendental Meditation with Mah­esh Yogi. While the Maharishi didn’t quite live up to the Beatles’ expectations, the fact that the band went to India to study meditation in the first place was a powerful statement. They had adopted Indian music and culture as an important part of their message, and whenever the Beatles embraced something unfamiliar to their fans, it would shortly become mainstream.

Looking back fifty years, 1967 was without question a watershed moment in the West when the search for higher consciousness and an alternative worldview had reached critical mass—with a particular focus on the spiritual and artistic traditions of India. As mentioned, at the Grammy Awards of 1967, the Beatles’ Sgt. Pepper won Album of the Year; Menuhin and Shankar’s West Meets East won Best Chamber Music Recording; and Ellington’s Far East Suite would win Best Instrumental Jazz Performance for Large Group. Ellington and Strayhorn were also given the Trustees Award at the cerem­ony. This remains the only year inGra­mmy history where award-­winningalb-ums in categories of rock, jazz, and Wes-tern classical music were influenced to some degree by Indian music. One wond-ers if such a scenario will ever be repeated.

Peter Lavezzoli is a music historian and award winning author.  One of his two books is Bhairavi: The Global Impact of Indian Music.

Fifty Years Of The Rise Of The Right