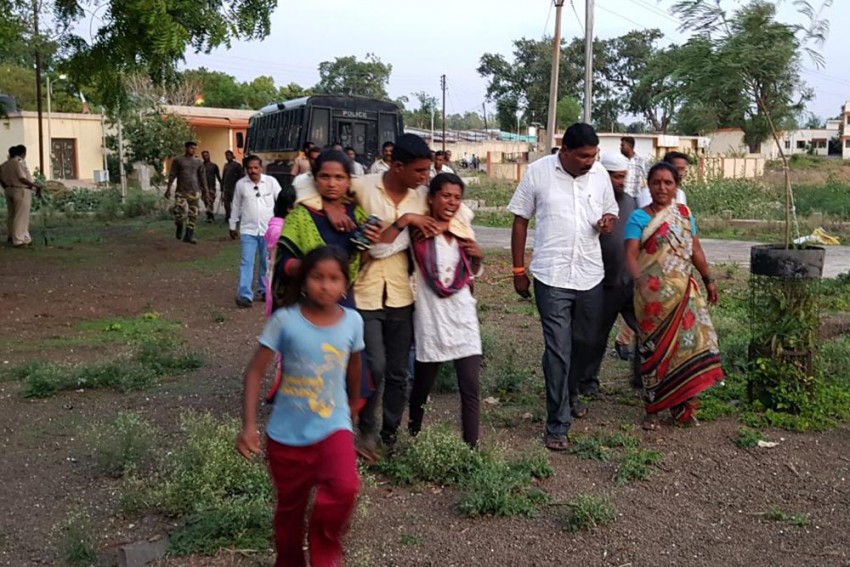 Blood Earth
Family of the men lynched in Dhule district being led away from the crime scene
Neel Shah July 04, 2018 00:00 IST WhatsApp: Messenger That Kills 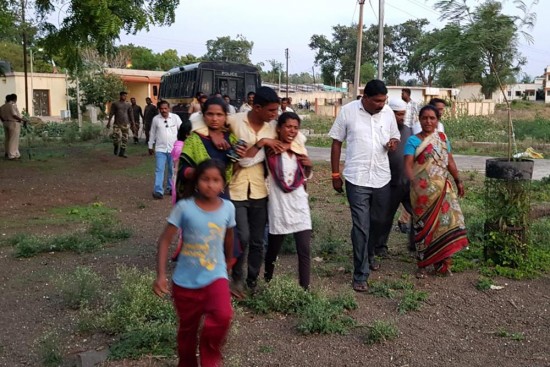 The rumours range from people stealing kids for tantric human sacrifice rituals to sneaky trafficking agents abducting young boys and girls from the countryside to ship them off to towns and cities to slave in factories or as dom­estic helps or, in worst-case scenarios, to be sold to brothels. Other versions touch on more conventional insecurities: a childless couple on the prowl to snatch children, preferably toddlers, to raise as their own or those who only have daughters and are now ‘hunting’ for a son.

The messages travel at the speed of light through neighbourhoods as WhatsApp forwards and Facebook posts uniting masses of people on the basis of common fears. Much like an outbreak, the viral ‘child-abductor’ posts have already cla­imed the lives of more than twenty innocent victims at the hands of feverishly hysterical mobs.

The latest news of lynchings has come out of Maharashtra. Five men from a ­nomadic community in Maharashtra’s Dhule district landed in a village market on July 1, but didn’t return home. They were confronted when one of them tried to make conversation with a young girl. Rumours were already circulating on WhatsApp about a gang of child abductors roaming in the village. 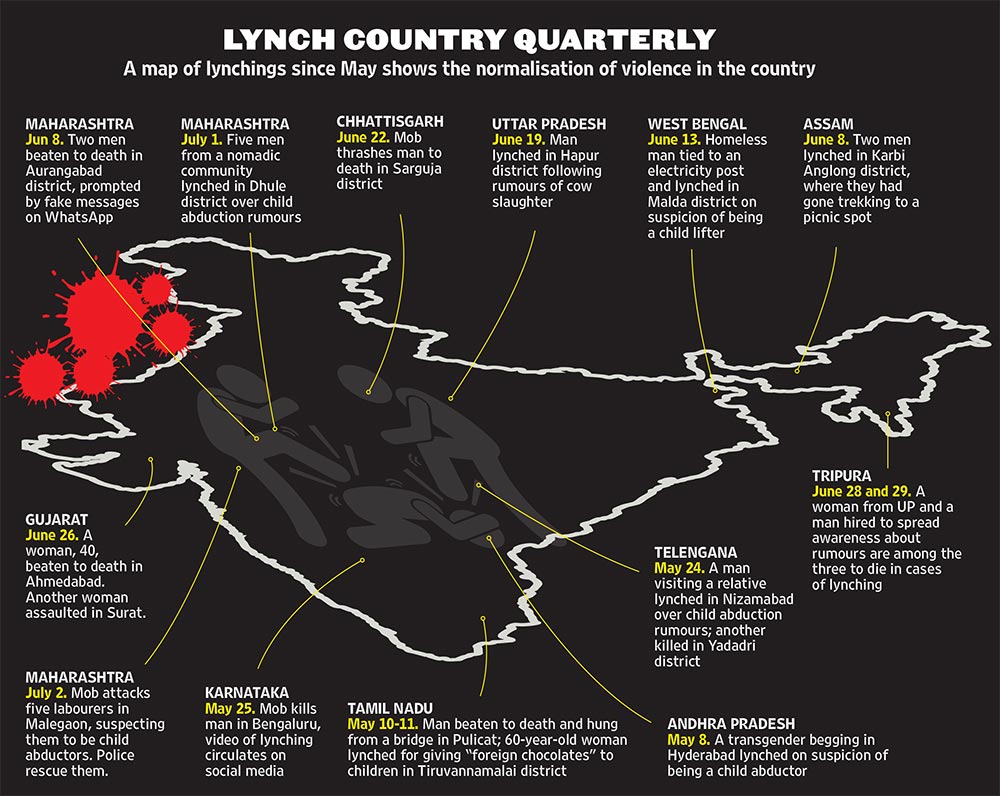 The conclusion about these five ‘outsiders’ being ‘child lifters’ was arrived at in a reductive, almost algorithmically inhuman manner. The villagers caught and locked the men in a panchayat house and beat them to death with sticks and iron rods. The attack in Rainpada village happened in front of unarmed policemen, who were clearly outnumbered and overwhelmed by the mob.

A day later, the police managed to prevent another mob of around 2,000 people from taking the lives of five labourers in Malegaon. “Both cases in Maharashtra were due to rumours on social media platforms such as WhatsApp, Facebook and Twitter,” Malegaon additional superintendent of police Harssh A. Poddar said.

These two cases happened after a fatal assault on two tribal men by a mob of around 400 people in Aurangabad district’s Chandgaon village on June 8. Buried under the widespread condemnation over the Aurangabad lynching were occasional WhatsApp posts of praise for the vigilantes for teaching suspected child snatchers a lesson.

This wave of child abduction ­rumours draws more from lore and myth, making any ‘stranger’ a suspicious person.

Statistically speaking, child safety is a very real issue. Human trafficking is a huge problem the government is grappling with. According to the National Crime Records Bureau (NCRB), there were 8,132 human trafficking cases in 2016 against 6,877 the previous year, with the highest number of cases reported in West Bengal, followed by Rajasthan. The data showed more than 60 per cent of the victims rescued were children.

But, like melodrama, this wave of ­rumours draws more from lore and myth, making any ‘stranger’ a suspicious person. As a result, public spaces are becoming hostile like never before.

A 45-year-old woman was lynched to death in Ahmedabad on June 26 by a mob after she was ‘suspected’ of being a child abductor. Another woman, who was  atte­nding a family function in Surat, was beaten by a mob when she stepped out to buy balloons for her three-year-old daughter on similar suspicions. Just a month ago, a 60-year-old woman was lynched for giving “foreign chocolates” to children in Tamil Nadu’s Tiruvannamalai district. In June again, a man hired by the Tripura government to spread awareness about fake news on child abductors was lynched by tribal villagers in a remote hamlet of the state who thought he was the wolf in sheep skin instead.

“Social media is like a matchstick to the already blind crowd. Its advent has caused a strong disconnect in hum­an-to-human interaction, which results in people blindly trusting rumours and the brain taking actions tuned to a stubborn mindset. This happened in the Stone Age, when disconnected humans attacked any suspicious object,” Mumbai-based psychiatrist Harish Shetty said, explaining the dark side of instant and virtual communication.

The fake news wave has prompted pol­ice to scan social networks, especially WhatsApp group chats, for ince­ndiary stuff. But that won’t be easy as the country has more than 200 million WhatsApp users, the Facebook-owned instant messaging app’s biggest market in the world, and all messages are encrypted from end-to-end.

After the Maharashtra lynchings, the state’s ­director general of police, Datta Padsalgikar, has advised people to maintain peace and not come under the influence of “rumours spread maliciously”. “It is also advised that no one should forward the received messages/rumours on WhatsApp or other social media without verification. All police ­officers have been instructed to spread awareness,” Padsalgikar reportedly said.

The warnings and arrests have not dete­rred the rumour mill, which continues to spark mob violence across India. The government’s recourse is to ask social networks to share more user data to help track down ‘rumour mongers’. But such efforts have hit several walls, including the issue of infringing ­individual privacy.

On several occasions, fake news spawns and overlaps fresh unverified massages, as was the case after two friends—Nilotpal Das, a 29-year-old sound engineer based in Goa, and Abhijeet Nath, a businessman from Guwahati—were lynched mid-June in Karbi Anglong district of Assam on the suspicion of being child abd­uctors. They had gone to a scenic picnic spot at Kangthilangso in the hill district to capture the sounds of nature, but came back home in body bags.

Reports said the duo was stopped by villagers on their way back, pulled out of their car and thrashed. A video of the ­attack surfaced later, in which one of them was seen pleading for mercy and telling the mob that they were Assamese.

After the fatal assault, unverified rep­orts circulated that the two friends may have seen and photographed gangs quarrying quartz stones secretly and illegally in the area and the mafia got them eliminated. However, there is no official confirmation on this count.