In their consolidation bid, players are also reinventing themselves 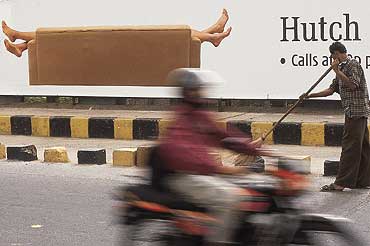 outlookindia.com
-0001-11-30T00:00:00+0553
The cellular market is changing. From a market characterised by 25-odd small players into one with only a few big guys with the resources and the grit to survive in a fiercely competitive environment, with their operations across circles creating national footprints and national identities.

Consolidation has been on for some time. Of late, though, cellular service companies have undertaken a national branding exercise to extend their brand equity across India. This includes Bharti, Hutchison and Birla-Tata-AT&T (BTAL) and BPL(the last two are supposed to merge operations), who account for over 95 per cent of India's cellular coverage. Says Bharti group chairman Sunil Mittal: "Initially, it was an enthusiasm typical of any new sector. Ten years later, with the clouds having cleared, only few have survived."

Says Sanjay Kapoor, executive director, Bharti Cellular: "There are few companies who can survive, as the industry grows and consumer demands for better and cheaper service increases. The only way to fight the onslaught is to create a unified national brand and offer services across circles on an all-India basis." While launching its Mumbai service last week, Bharti unfurled its national initiative with a bouquet of value-added services. Says Mittal: "It's been our aim to have a pan-Indian coverage and we are very close to achieving that."

Says Sudershan Banerjee, CEO, Hutchison Essar: "A unified brand will give us the advantages of delivering one experience to customers across the country." Hutchison recently underwent a national rebranding exercise. Hutch, the new unified brand, will operate in seven circles, of which four have already adopted it: the three new circles of Chennai, Andhra Pradesh and Karnataka and the existing circle of Delhi. The other three—Mumbai, where Orange has a larger-than-life image, Calcutta, where it operates under the Command brandname, and Gujarat, under Cellforce—will, in time, become Hutch.

The third biggie—BTAL—too has rebranded its service recently to create a national brand. Idea has arrived in Maharashtra and Goa, Andhra Pradesh, Madhya Pradesh, Chhattisgarh and Gujarat, and is scheduled to launch in Delhi in September. If its proposed merger with BPL goes through, Idea will add a few more circles to its kitty, strengthening its position as a national brand. Says a telecom expert: "If you are operating in five to six circles, it makes business sense to maintain a unified identity. You are then in a better position to expand your services and give your customers value-added options."

But a major factor to get companies to acquire a pan-Indian image was also the entry of Bharat Sanchar Nigam Ltd (BSNL). With its infrastructure from fixed-line operations already spread across the country, BSNL promises to be one of India's largest cellular operators with a coverage few private firms can dream to match. Other than Delhi and Mumbai where MTNL operates, BSNL plans cellular service in almost all cities in India under a single network. Says the expert: "They have the wherewithal to challenge any private sector player. They have technology, resources and experience unmatched by any player, plus their network which can put any other player to shame."

But what about services? Most private players smirk at BSNL's confidence. Says Banerjee: "If that was so, all car companies would today make tyres also. It is not just coverage which counts. In telecom, brand experience is a big thing and you cannot play a game outside your core competence." Bharti honchos agree. Says one: "Brand loyalty is built by good service and not a wide network. And you cannot play on price anymore. Indian customers are today mature and demanding better services even if they have to pay a higher price for it."

In the coming months, expect cellular companies to bend backwards to provide you the sky.And if services get better and cheaper because of this, no one should have any reason to complain.