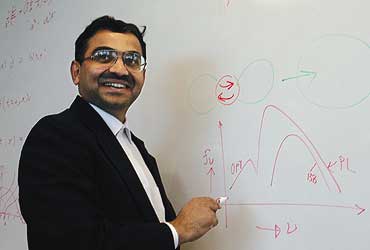 outlookindia.com
-0001-11-30T00:00:00+0553
For a man who seems to have gotten so much right, Shrinivas Kulkarni sure spends a lot of time trying to figure out what he didn’t. Kulkarni—"Shri" to his friends—is a star in the world of astrophysics, credited with the discovery of brown dwarfs and gamma ray bursts. And yet, when he sits in his book-lined office in the sprawling campus of Caltech University in Pasadena near Los Angeles, he asks, "What went wrong?"

"That is the question I ask myself at the end of the day," says Kulkarni. "I think very hard on what I am not good at and am constantly improving on my weaknesses."

Kulkarni, now 45, is among the younger winners of the prestigious Janski Award (Karl Janski is the founder of radio astronomy). "It was a surprise," he says. "The Janski is usually given to people in their sixties." But he’s also pragmatic about it: "Basically, people question you less when you get prizes and funding comes easily." He adds, "I consider myself lucky to find things others have been trying to find for a long time. You can either be super-brilliant, which I am not, or a good guy with luck."

Hard work and pragmatism is the credo of the Hubli-born Kulkarni. His father, Dr R.H. Kulkarni, a professor at the Hubli Medical College, had dreams of his son also becoming a doctor. But these hopes were dashed when a 12-year-old Kulkarni, on witnessing the first incision in an operation theatre, promptly fainted. The medical baton had to be taken up by elder sister Sunanda. (Incidentally, his other sisters Sudha and Jaishree are married to N.R. Narayanamurthy of Infosys and Dr Desh Deshpande of Sycamore Networks.)

Medicine may have later been ruled out but science was his favourite subject at Kendra Vidyalaya, Hubli. His hard work won him a National Science Talent scholarship that paid for his tuition while studying applied physics at IIT, Delhi. Kulkarni vividly remembers the first time he saw the sky through a radio telescope when he went to the Raman Institute in Bangalore. That was the beginning of his fascination with astronomy.

This stargazer is also going into questions that at first seems metaphysics: how did origin begin? Has it been there all the time? "Is earth special? This question leads us to search for other life," he says. The origin of universe question ignited his interest in gamma bursts. And to search for answers on whether there is life on other worlds has him interested in a 2009 NASA mission to survey nearby stars looking for planets.

What next? "I usually don’t like to be in a field where there are other people already doing research. Then you have to be faster and clever, and I am neither," says Kulkarni.

Married to Hiromi Komiya whom he met while studying at the University of California, Berkeley, Kulkarni’s other obsession is Latin American music, especially Brazilian. "It is full of passion and energy," he explains. Something in common with stars.