The ASI finds run counter to the radar survey expectations 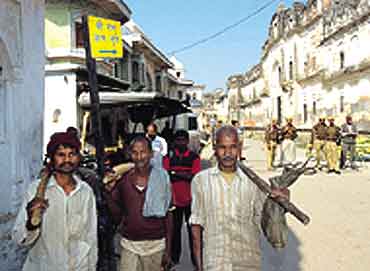 outlookindia.com
-0001-11-30T00:00:00+0553
The ASI may have a surprise in store for all those interested in what lies beneath the debris of the Babri mosque in Ayodhya. Contrary to expectations, the ASI has now stumbled upon stairs leading down into a bathing tank-like structure, a "baoli". No one, least of all the geophysicists of the Tojo-Vikas International Pvt Ltd, had predicted the possible presence of such a structure.

"This just proves that people have been spreading all kinds of rumours about this place. We have a photograph taken in 1950 that also showed such stairs. We'll have to assess whether they're the same stairs. But one thing I can say with full authority, we are watching the ASI very carefully and no hanky-panky will be allowed. And this Tojo-Vikas survey is a pack of lies," says Khaliq Ahmad Khan, an observer at the excavation site. ASI officials confirmed to Outlook the presence of the steps leading to a well.

The Tojo-Vikas radar survey had indicated a "mound" or concentric structure that the geophysicists interpreted as "pillars". This was lapped up by the pro-Sangh academics, like former ASI director-general B.B. Lal, as the much-desired "evidence" of the presence of a temple beneath the disputed structure.

The Tojo-Vikas report was silent on the possibility of stairs or an ancient water body in the area. Interestingly, some academics had pointed towards the possibility of the "concentric structure" being a wall, a well or any other kind of water body. What the ASI is now unearthing runs counter to the Tojo report.

"They've also found broken bangles and some decoration pieces. They have to be evaluated and assessed. Stairs have been discovered. We have to see what further excavations reveal. Observers from both the sides are assessing the situation on a day-to-day basis. We don't feel there is any scope for 'planting' any evidence," says an archaeologist at the site.

Experts are suspecting that the area may just have been used as a "dumping ground" as well. Whatever the case, as of now the ASI is far from producing the "evidence" that would legitimise the demand for building a temple at the disputed site.