What If We Had Opted To Become A Hindu Rashtra?

A theocratic constitution is a contradiction because that means some other law has precedence over the Constitution's sovereignty. Pakistan is a mirror enough of what a theocratic state can be. 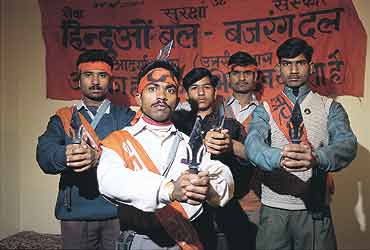 outlookindia.com
-0001-11-30T00:00:00+05:53
The Irfan Habib Interview: Was it destiny that made us a secular state instead of a Hindu rashtra? Yes and no, says historian Irfan Habib. Secularism is a principle our founding fathers took so much for granted that they did not even feel the need to insert the word into the Constitution. It was Indira Gandhi who inserted it into the preamble during the Emergency to support her position that she was fighting Hindu communalism.

What if Nehru had died in 1955, would we then have had a Hindu rashtra?
I don’t expect by 1955 it would have mattered very much. In fact, the defeat of the rightist forces in the first general elections signifies that the Hindu right did not have much political support.

What if the right had won the first polls?
That would have placed India in great difficulties because you wouldn’t have had the Hindu Code, you wouldn’t have women’s rights at all, because, remember, Hindu women had no right of succession. Muslim women were better placed than Hindu women before the Hindu Code. In fact, in the Hindu Code women were being just given as much rights as Muslim women, only half the share, but Parliament amended it. Women’s rights would have obviously suffered because all these Hindu right elements were against the Hindu code. And, of course, economic development would have greatly suffered, because they didn’t have any notion about how to build up industry. It would’ve been a capitalist-landlord kind of state in which there would have been hardly any land reforms. Most of the land reforms were implemented between the early ’50s and early ’60s. All these right forces were against land reforms.

What if there’d been turning points at which we did become a Hindu state?
This scenario is so difficult because that means we should have had a different kind of national movement, we would have no Karachi resolution of 1931...you can be counter-factual but you can’t be to such a degree. How the whole national movement was constructed around the Congress and other parties also prevented the formation of a Hindu state. As Gandhiji said, "The nation is not built on religion." And of course, there were other elements in the national struggle like equality of women. Hindu-Muslim unity was not the only touchstone for secularism. Secularism means you rely on reason, not religion.

But could there have been one particular moment in history when we could have gone the way of a Hindu state?
Well, I suppose if Gandhi had not stood up as he did in 1947 until his martyrdom in January 1948, things would have been very different. Any one time that a Hindu could play such a role, it was played by Gandhi. His role throughout the riots, his Calcutta hunger strike, his Delhi hunger strike, his march for payment of Rs 50 crore to Pakistan...it went against the grain but he stood up. But then, behind it, of course, would be Gandhi’s own path, the whole path of the national movement, the fact that once he stood up, the bulk of the people supported him because of the path. Certainly, the fact that he stood up at that point was of signal importance.

The historian Irfan Habib was talking to Sheela Reddy.

Tours 732: What if Charles Martel hadn’t defeated the moors? Would Europe be Islamic today?

What If Shastri Hadn't Died Suddenly In Tashkent?