What If Advani, Not Vajpayee, Had Been PM?

Psesudo-patriotism would have defined the flawed and short-lived Advani regime. He would have replicated Charan Singh, a man at ease with his petty prejudices, small ideas and intellectual banality. 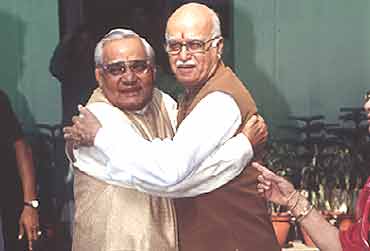 outlookindia.com
-0001-11-30T00:00:00+0553
If in 1998 L.K. Advani instead of Atal Behari Vajpayee had become the prime minister of India, he would have been a rather natural choice at that moment in our history. In ’98, Advani had the image of a leader with bark and bite; he deemed to hold out the promise of the kind of stern leadership that would have answered the nation’s yearnings at that moment of grand national confusion, created by the conniving and conspiring men and women in the Congress. On the other hand, Vajpayee was the natural choice of all those vested interests who wanted to have a working government in Delhi that would let them keep on plying their chipped wares. By training and temperament Advani did not—and Vajpayee did—possess a Brahminical equanimity that Indian civilisation had valued. And though Vajpayee had not tasted power in any real sense of the term till 1998, he was always an "insider", having a good working relationship with Indira Gandhi and later with Rajiv Gandhi whereas Advani had joyfully nursed his outsiderness.

So, if somehow circumstances had conspired to park Advani at the country’s most powerful political office, he would have replicated Charan Singh, a man at ease with his petty prejudices, small ideas and intellectual banality. Like Charan Singh, Advani has never felt the need to negotiate his way out of his limited political patch, circumscribed by the Sangh parivar’s cultivated sectarianism. Like Charan Singh, he would have made a gratuitously combative chief executive.

Though both Vajpayee and Advani can be said to be the product of the same RSS mumbo-jumbo factory, the two had very different defining life experiences. Vajpayee always belonged—culturally, politically, and emotionally—to the Hindi heartland; he never had doubts about his roots and his rootedness. For Advani, 1947 was the defining experience, subconsciously locking him in pain and bitterness of dislocation (from Karachi) and violence of the Partition. It was that experience that rendered him psychologically scarred and shaped for decades his personality, politics and predilections.

Moreover, Advani has led a rather prosaic life. The ordinariness of that life would have proved a mixed blessing to him at the helm. As a man who has had a very stable, honest and seemingly satisfied family life, he would have been far less vulnerable on account of this or that family member. Nonetheless, the same ordinariness has bred a bleak austere reflex not prone to settle for a compromise, especially with the corporate crook. If, for example, he had allowed the cbi to raid the Reliance offices, he would have stood by his officers rather than give marching orders to the director when the shit hit the fan. So, an Advani innings would ipso facto have been characterised, for better or for worse, by his personality. That means he would have looked for "loyal" rather than competent ministerial colleagues and bureaucrats to man key positions. Vajpayee would certainly have been his foreign minister; he would have probably preferred Bhairon Singh Shekhawat rather than Murli Manohar Joshi as home minister. But he would have neither attracted nor empowered officers like Brajesh Mishra and N.K. Singh as his principal aides. Nor Soli Sorabjee as attorney-general.

Advani would have brought his ignorance of economic issues to South Block and most certainly would have allowed the likes of S. Gurumurthy and Nusli Wadia to play the extra-constitutional finance minister. Given his visceral awe of the uniformed officer—police or military or in mufti—his administration would have cultivated a spuriously manly tinge. Advani has fixations of a sub-inspector: there is no problem that the ‘havaldar’ cannot sort out. All the coercive instruments available to the Centre—RAW, IB, CBI, Enforcement Directorate, etc—would have been merrily used to soften up rivals and warn friends, in and out of the BJP. In particular, he would have gone after Sonia Gandhi in the belief that her Bofors cupboard was overstuffed with politically charged skeletons.

Advani would have stumbled into a conflict with Pakistan. He would have most certainly carried out Pokhran II. As it is, it was a collective decision and the BJP gang had come to power with its mind already made up. But it is doubtful if Advani would have been able to handle nuclear power with responsibility and restraint. His statements after Pokhran II and before Pakistan’s Chagai tests (on May 27 and 30, 1998) offer a clue to his possible behaviour.

Within days of our nuclear tests, he had, on May 18 called a grand "strategic" meeting on Kashmir and pronounced that the proxy war in Kashmir emanated from the simple fact that "Pakistan has remained unreconciled to the non-theocratic and non-denominational principle on which the Indian nationhood rests." He invited Pakistan to "realise the change in the geo-strategic situation in the region and the world." In less than two weeks, Pakistan went nuclear, leaving Advani fuming against "pseudo-liberals" at home "who would like to hand over Kashmir and buy peace." He would have insisted on treating the Kashmir issue as a law and order problem and would have driven the separatist leadership into an anti-India phalanx.

As a man who is happy with the clever tacticians from the Sangh parivar stable, Advani would have allowed himself to try to overcome the limits of numbers and allies by breaking out of the coalition paradigm. He would have artificially created a "crisis". In particular, he would not be able to handle pressure from the VHP on the mandir issue; the resulting aggravation of communal tension at home would have mentally set him up for a tendentious confrontation with Pakistan. Psesudo-patriotism would have defined the flawed and short-lived Advani regime.

Zurich 1913: What if Carl Jung had overshadowed Freud? Would the couch have survived?

What If Medha Patkar Hadn't Gone To Narmada?