What I Really Missed

I didn't get to be part of the execution squad but—boy!—didn't it shoot straight? 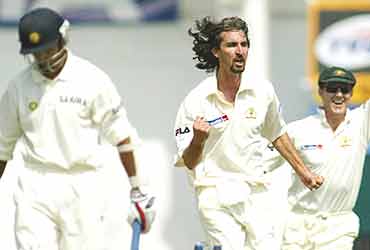 outlookindia.com
-0001-11-30T00:00:00+0553
One more week. That's what we are telling ourselves during this final Test of the tvs Series. The Border-Gavaskar Trophy is already ours, but we know that 3-0 sounds better than 2-0 and we want the best scoreline on offer. Back in Nagpur, Allan Border said the trophy cabinet in the Cricket Australia office must be really overcrowded because this team has won in every Test-playing country it has visited so far. I guess we would have achieved a cricket equivalent to a Grand Slam once we get that icc Champions Trophy into that cabinet. I feel fortunate to have played in an era when the team is doing so well.

Coming as it does after 35 years, this series win is a big achievement for us. Plenty of planning and preparation, both mental and physical, went into it and I'm happy to see that our hard work has been rewarded. The only tinge of disappointment is the fact that I was not part of the first three Tests, but I think Adam did a marvellous job while leading the team in my absence.

Looking back at the three Tests, I think our team adjusted to the conditions better than the hosts did. Right through the series, each and every pitch has been the topic of heated debate. It is important not to worry too much about conditions. We were prepared for any wicket that came our way this time, and I think this is a major factor in our wins in Sri Lanka as well as in Bangalore and Nagpur. Before the Nagpur Test, everybody was talking about the grass on the wicket. Saurav Ganguly went to the press saying the pitch was not the way he wanted it, and was open about his desire to see the grass shaved off. Perhaps that concern and worry filtered through the team, and the Indian batsmen were defeated even before a ball was bowled. The wicket is the same for both sides, and eventually it's the team which adapts quickly that wins.

The other major factor was that the batsmen who were the backbone of India's success against us, v.v.s. Laxman, Rahul Dravid and Sachin Tendulkar, just did not fire this time. I watched Laxman and Virender Sehwag at the Champions Trophy and both looked out of sorts. Sehwag has found his touch, but Laxman is nowhere near his 281 form. Hopefully, that lean patch is lasting for just this one game too, so that we can end this series on a winning note.

Dravid too looks like a pale shadow of the batsman who scored 300 runs to take his team to victory at Adelaide. As far as Sachin Tendulkar is concerned, the Indians must have rushed him back into the third Test because of the way the series was poised. It's hard to comment on his injury, since I don't know the details, but he looked like he would have benefited from some more recovery time. It would be unfair to judge a player of Tendulkar's class on the basis of that Test, but he was nowhere near his free-flowing best. The pressure and expectations combined with his own physical condition rendered him ineffective in that game.

However, the most crucial factor for our success this time round was the way we played. We sustained pressure right through the first three Tests and were unrelenting in our approach. While our batsmen were able to score well and occupy the crease for long periods, our bowlers were able to suffocate the free-scoring Indian batsmen by drying up the boundaries. Both Harbhajan Singh and Anil Kumble had 10-wicket hauls each, but the return per wicket and the time the wickets took in coming ensured that we were never bundled out, except in the first innings during the Chennai Test.

Eventually, it was the skilful way in which we executed our plans that ensured that the Indians did not get a chance to come back. When a team with our ability executes its plans well, it is always going to be difficult for the opposition. The Indian selectors have rung in quite a few changes for the last Test. Have the changes come one Test too late? We will never know, but I'm sure they are particularly disappointed with Parthiv Patel's performance. They were patient and persisted with him for more than two years, but his wicket-keeping just did not improve. His batting always looked pretty good but his misses behind the stumps cost him his place. We have not seen much of either Gautam Gambhir or Dinesh Karthik, but I guess they will get to play a few more games after this Test to prove themselves.

The Indians are without their captain Saurav Ganguly in this Test. I met Saurav in the hotel foyer on Monday, when he was checking out. He told me that a fluid accumulation in the groin area was causing him considerable pain. I don't know much more about the injury, but his absence will hit the team. The pitch in Mumbai does not surprise me one bit since it is very dry and without a trace of grass.

Both Glenn and Kasprowicz were down with flu a day before this Test and we had to weigh many options before choosing this eleven. We could have gone in with Cameron White as an all-rounder option in place of one of the batsmen, and since two of our main pacemen were unwell, Brett Lee knew he could get a game. However, both recovered before the match began and changed the situation quite a bit.

I hardly got to double figures when I came here in 2001, so Mumbai represents the only chance I have to prove to myself as well as the world that I've come to grips with the Indian pitches. In fact, it was more as a batsman than as the captain of the Australian team that I've missed something by not playing the first three Tests. I knew the team would do well without me, but I had prepared myself as a batsman for this particular tour.

I have not been this excited about a game in a long time, and my return to action has taken a long time. My hand feels fine now, I did plenty of training in Nagpur and felt comfortable batting at the nets in Mumbai.

We proved in Sri Lanka that we have gotten over the dead rubber syndrome over the last couple of years. We won a very exciting final Test, and hope to emulate a similar scoreline in India as well.