'We've Created A Sense Of Urgency'

Shortly after the Nobel Peace Prize was announced for the Intergovernmental Panel on Climate Change that he heads, R.K. Pachauri met Outlook in New Delhi. 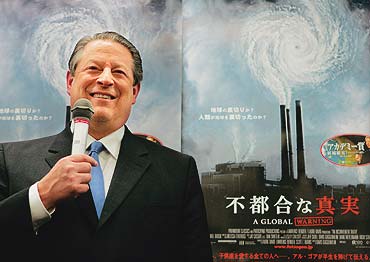 Frankly, our knowledge base would have been very, very poor. The IPCC's first two assessment reports, in the '90s, had a major impact on framing the Framework Convention on Climate Change, and the Kyoto Protocol. The third report, in 2001, had an impact on people who had earlier not considered adapting to climate change. The fourth report has had an explosion of interest and coverage. IPCC's major achievement has been to create an enormous amount of understanding and awareness across society as a whole.

Has it really shifted the goalposts?

It has certainly created a sense of urgency, highlighted the need for action. To give you an indicator, at a meeting organised by the UN Secretary-General on September 24, 80 heads of state and government spent an entire day talking about climate change. It could never have happened a year ago. It undoubtedly happened because in the last 7 or 8 months since we began bringing out our fourth assessment report, there has been a total shift in perception, and a change in level of awareness.

Key being the confirmation that human acts cause climate change?

Yes, that. But also much better understanding of the impacts of climate change, which areas are vulnerable, which areas will be worst affected, and how we can adapt. We also understand mitigation measures better: how you can reduce the emissions of greenhouse gases. There were serious misperceptions about the cost, and the loss of jobs in most economies. We've established in this report that there is no such danger.

What have you brought to the table?

I've brought about a better understanding of issues that are crosscutting; a better integration of the three groups within IPCC which work on different aspects of climate change. I've also been able to bring about a better consensus in a diverse group of nations, that all their voices are listened to. Some scientists were attacked from the outside, I've stood by them. That creates a sense of confidence.

Gore was very critical of your having won the IPCC election. Is it just the Nobel that has brought you together?

No, the rift had been breached earlier. We had talked earlier and he was very gracious. In our previous conversation, well before the Nobel was announced, he said that when a broken bone heals, often the joint becomes stronger than the original bone.

What led to the healing?

Well, I am just speculating.... He may have had misgivings about me and I suppose when he saw the results he realised there was a misperception.

Some say Gore and IPCC need each other: he needs your science, you need his advocacy and passion?

I don't know if that's true. All I'd say is that I have great regard for him, he is a wonderful human being and very dedicated to the cause. He has certainly relied on the science we provide.

Do you need his advocacy?

I think the world needs his advocacy, but to be honest, most of his work has been in the US, and rightly so. That's where you need action.

You have many admirers, but also critics. One criticism is that you have not been proactive in looking for constructive solutions, going beyond the impasse between developing countries and the West.

It's not my job. The IPCC is a scientific organisation, and I'm supposed to take no positions at all. I'm not going to get into political stances. I've made sure the position of developing countries has been brought to the fore in every respect while dealing with the scientific assessment of climate change. The IPCC's job is to produce knowledge and disseminate knowledge, not to act as honest brokers between North and South.

Warming Up To It