'We'll Vote Against The UPA Govt'

A visibly upset CPI(M) general secretary on the Left's new political isolation, and its future plans 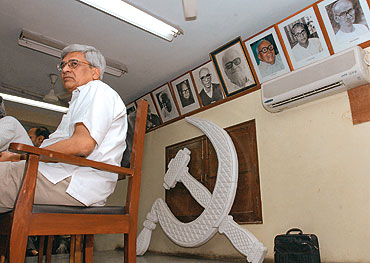 outlookindia.com
-0001-11-30T00:00:00+0553
For the last four years, the almost constant presence of OB vans outside AKG Bhawan, the CPI(M) headquarters in Delhi, reflected the key role the party and its Left allies—the CPI, the RSP and the Forward Bloc—played in policymaking on Raisina Hill. The Left's vision provided a counterpoint to South Block's neo-liberal worldview. Today, with their long-time friend and ally, the SP, having decided to back the Congress-led UPA on the nuclear deal, the Left stands totally isolated with just one friend, the Telugu Desam Party. A visibly upset CPI(M) general secretary Prakash Karat spoke to Outlook about the Left's new political isolation, and its future plans:

The Left now stands politically isolated. What is your response?

We don't like to lose allies, but we can't be opportunistic on policy issues. We hadn't expected the SP to cross over (shrugs) but then we were never part of the UNPA. We merely cooperated with it on issues. With the SP taking the position it has, the UNPA will now disintegrate. What's happened has proved what we always maintained—that it was premature for an alliance. A third alternative can only emerge through agreement on a common policy framework, not through electoral compulsions or exigencies. We aren't in a hurry.

Are you bitter on how ties with the Congress are ending?

There is bitterness when there is a close relationship. We were always careful to maintain our distance from the UPA. Ours was a relationship based only on the CMP, which we tried to manage as best as possible. It was the Congress which violated the understanding with us—that it would not proceed to the IAEA without our concurrence. We had not thought the break would come on a foreign policy issue, and American imperialism at that...we thought it would be a domestic policy. But since July '05, when PM Manmohan Singh went to Washington, it has been the running thread of the conflict. Two years ago, we knew this was an issue on which we would not compromise.

How will the break with the Congress affect the Left politically?

We won't suffer. In fact, there was great pressure from below (party cadre) not to compromise with the Congress on the deal. It will pose problems in some states (like TN, where the Left has two MPs, or Jharkhand, where it has one). But, in Kerala, West Bengal and Tripura (where the party is the principal opposition), the Congress can't help us. In any case, the Congress and UPA base is rapidly shrinking across the country. We will shortly begin a countrywide campaign against the Congress...we'll ask the people to defeat the party in the next elections for they are compromising national integrity and the livelihoods of people. We will link this to inflation and rising prices.

So if the N-deal goes forward, will the Left try to topple the government or merely withdraw support to the UPA?

If there is a vote of confidence in Parliament on the issue, the Left will vote against the government. But we will do so only after the government formally conveys its decision to proceed with the deal.

If, after the next general elections, Left support to the UPA becomes crucial to keeping a BJP-led government out, will you back the Congress again?

In 2004, the BJP had been in power for six years. We had framed our tactical line keeping that in mind—one, to defeat the BJP and oust it from the Centre; two, to help form a secular government in its place; three, to strengthen Left and democratic forces. This time the role of imperialism and growing collaboration with the US will be an important factor in formulating our tactical line. I can't predict now what we will do after the elections.

Off On A Bicycle