The IBP buy-out consolidates IOC's position in the petro sector 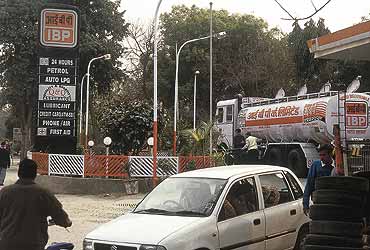 The government's fifth round of disinvestments—after BALCO, Modern Foods, CMC and ITDC hotels—has come with its routine quota of tensions. Indian Oil Corporation (IOC) has already started drawing flak for bidding an exorbitant price to acquire petroleum marketing company IBP. On the other hand, the new department of disinvestment (DoD) regulation preventing state-owned companies like IOC from bidding for the next two oil giants to be disinvested—BPCL and HPCL—to avoid a monopolistic regime, comes as a surprise.

"Does the DoD feel we seriously want to bid for BPCL and HPCL? We have nearly one-third of the country's refining capacity (32.3 per cent) and after acquiring IBP, we are not likely to be too interested in buying another retail network," IOC finance director P. Sugavanam told Outlook.

Sugavanam also denies all allegations of overbidding (Rs 1,153 crore for a 33.58 per cent stake in IBP). "That's the best way to keep competition out and it makes perfect business sense. IBP picks up 80 million tonnes of diesel and petrol per year from our refineries. We lose IBP, we not only lose the order but also IBP's 1,540 retail outlets (mainly in eastern and northern India, with another 150 planned over the next two years). Now we have the order and the outlets as well. This will help us maintain a competitive edge in the retail market after price controls are lifted two months from now," says Sugavanam. "It would have cost us somewhere between Rs 1,500 and Rs 1,700 crore to set up 1,500 outlets and it would have taken four years. Instead, we will spend about Rs 400 crore in the current fiscal to create 325 retail outlets that will add to our existing 7,600. Besides, despite our 54 per cent marketshare in petro-products, the retail outlet share now is only 40 per cent."

Market analysts say that with the addition of IBP's 1,540 outlets,...