A flawed ICC rule lurks in the sidelines; an ode to Lankan cricket; and for fans, a Donnish history break. 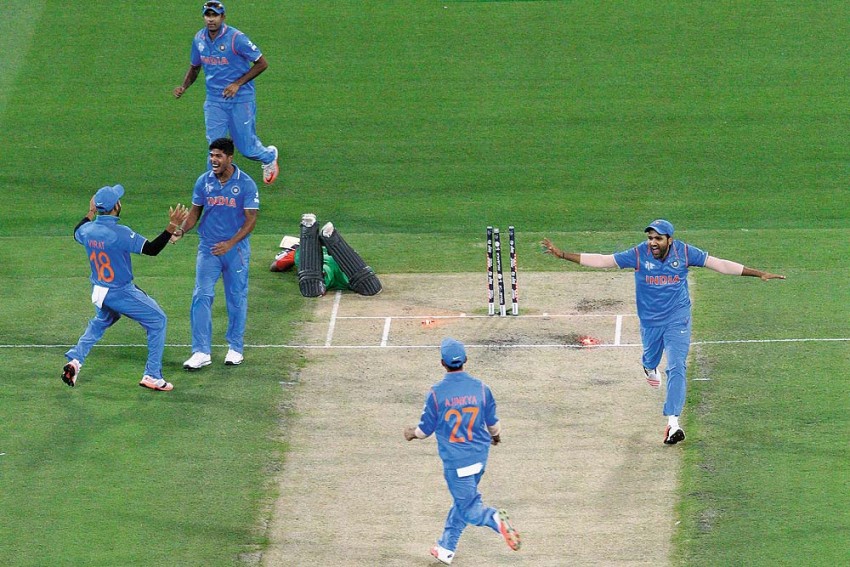 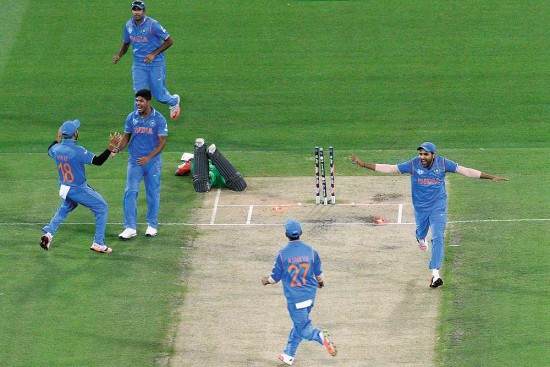 It is hard to imagine a more one-sided knockout match than the first quarter-final of the (ICC) Cricket World Cup 2015. Everything that could have gone wrong for Sri Lanka went wrong at Sydney. South Africa, raising its game a level and playing with focus and aggression to win its first knockout match in any World Cup, was very good but nowhere near what the scoreboard suggested. The great pity is that Sri Lanka’s collapse happened in the last ODI for two champion cricketers—Kumar Sangakkara and Mahela Jayawardene. After a disastrous showing by the openers, Sangakkara—conqueror of pace and spin, the most stylish stroke-maker alive, maker of four consecutive, fast-paced centuries in this World Cup, with 12,203 Test runs at an average of 58.66, who stands No. 1 in Test, and No. 2 in ODI, rankings—just got stuck and that was that.

No surprise from the Melb­ourne quarter-final; India still on a roll. The surprise perhaps is that after a winless summer in Australia, the second-ranked ODI team has got to the semis without being stretched once.

At this stage, the playing conditions, and especially the pitch and the weather, will be of increasing interest and some concern to the teams. The drop-in pitches at Melbourne and Adelaide are made to order for batsmen, flat and full of runs. The Sydney wicket on which the first quarter-final was pla­yed was two-paced; the spinners got good purchase but after the light rain the pitch quickened and helped South Africa. The New Zealand wickets may not be as bouncy as traditional Australian pitches but they tend to be spongy for seam, like the English pitches of yesteryear, and the conditions also favour genuine swing.

The greater concern is about matches being rained off, either completely or without 20 overs being bowled by each side. The weather predictions for the playing venues suggest that while there is some risk of matches being interrupted by rain, it is very unlikely that any of the remaining matches will be abandoned. Law 12.1 of the playing conditions for the ICC Cricket World Cup 2015 provides for a reserve day in the knockout round for incomplete matches but it does not seem to apply to matches abandoned without a start (wit­h­out the captains tossing in the field of play), which makes little sense. Laws 21.10.2 and 21.10.3 lay down that if a quarter-final or semi-final match is abandoned or tied or if the match is a no-result, the team with the higher position in the pool stage will advance. If the two teams have finished on equal points, the order of priority for determining the higher position will be the number of wins, the net run rate, and the original seeding. If the final is tied, there will be a super over to decide the winner but if it is abandoned or is a no-result, the finalists will be declared joint winners.

If it is the case that no reserve day has been provided for a completely abandoned match, it seems harsh that the progression of teams in the knockout stage will be decided, without giving them a second chance, by what happened in the pool stage. This becomes even less defensible when the teams have progressed from different pools. One hopes that if this happens, there will be enough discretion left with the authorities to provide a reserve day for a match abandoned.

That the ICC top management thinks primarily in terms of rights cycles was intimated to the cricket-playing world by chief executive David Richardson in an interview given in February 2015 (http://www.espncricinfo.com/ci-icc/content/story/826327.html). He can now take satisfaction from that fact that the structure of this World Cup did what it was designed to do in this ‘rights cycle’. Grouping 14 teams in two pools ensured that there would be no nasty surprises for the ICC’s host broadcaster, the ESPN Star Sports combine, and other commercial partners. And changed thinking and TV-driven revenue calculations for the next rights cycle more than the vision behind the ICC’s strategic plan for ‘A Bigger, Better Global Game’ have ordained that in 2019 and 2023 the premium event should be played among 10 teams that are more “evenly matched and competitive” (to use Richardson’s words). 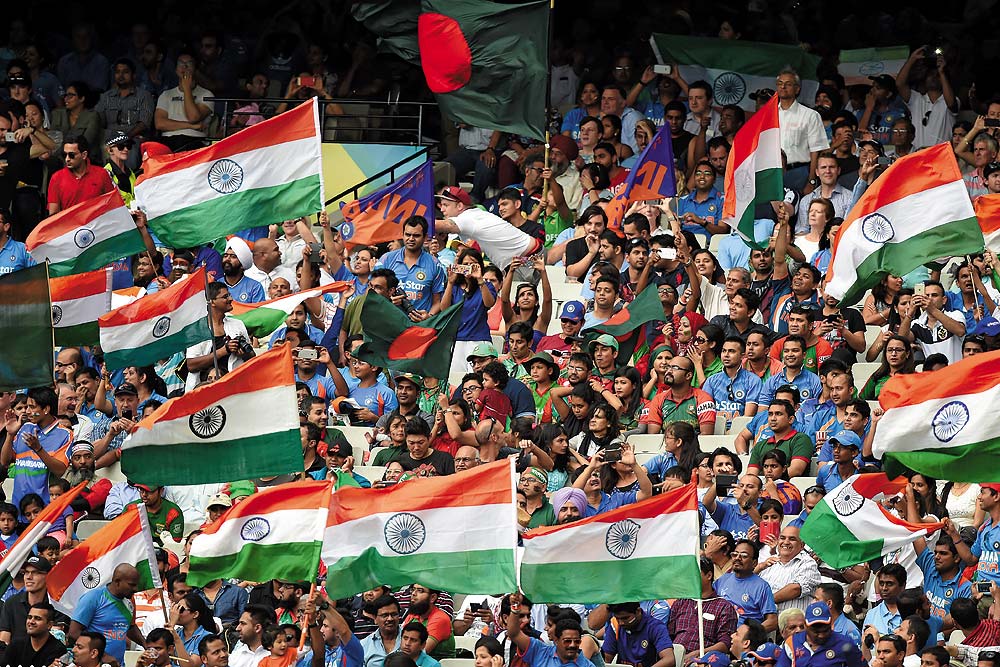 Opposition to the ICC’s decision to downsize participation has strengthened across the cricket-playing world, with more leading cricketers speaking up on the progressive side of the issue and a petition to the ICC demanding a reversal attracting more than 20,000 supporters online (https://www.change.org/p/international-cricket-council-reverse-the-decision-to-reduce-the-2019-world-cup-to-ten-teams). It is no surprise that with his World Cup done, Ireland’s captain, William Porterfield, spoke out strongly against the ICC’s retrogressive decision.

Interestingly, Porterfield, who knows his cricket history, called attention to a powerful case in point—Sri Lanka: “Look where they are now. They won the competition less than 20 years after becoming Full Members”. In fact, Sri Lanka’s ODI World Cup triumph in 1996 came just 14 years after it was admitted to full ICC membership and gained Test status. The man responsible for this more than any other was my friend Gamini Dissanayake, a young, energetic, and charismatic UNP cabinet minister who was president of the Board of Control for Cricket in Sri Lanka between 1981 and 1989. He was one of the architects of the India-Sri Lanka Agreement of 1987 and was tragically assassinated in 1994, at the age of 52, in the midst of a presidential election campaign, by an LTTE suicide bomber. Gamini, who was a powerful politician with many calls on his time and an abiding memory from the 1980s, when I used to visit Sri Lanka as a political journalist, was seeing Test cricketers wait patiently for their patron in the verandah of his Colombo home while matters of state, including Sri Lanka’s international cricket ambitions, were being discussed inside.

There is substantial literature on the history of Sri Lankan cricket but the most context-rich analysis of the country’s rise to the top levels of cricket can be read in Sangakkara’s MCC Spirit of Cricket Lecture, given at Lord’s in July 2011 (http://www.lords.org/mcc/mcc-spirit-of-cricket/mcc-spirit-of-cricket-cowdrey-lecture/2011-kumar-sangakkara/).

Tens of thousands of Indian fans are in Australia to watch the World Cup games and, in 90 per cent of the cases, mainly to cheer the men in blue. Fans who are serious about cricket history have a rare window of opportunity, between the quarter-finals and semi-finals, to visit Bowral, where the greatest cricketer in history honed his batting and fielding skills. Bowral is 115 km to the southwest of Sydney, where India will play the second semi-final on Thursday, March 26. The town, which has a population of about 14,000 today, is easily accessible by car, bus, and train.

In 1998, I visited Bowral, walked through the then-basic Bradman Museum, which had opened only nine years earlier, stood on the Bradman Oval, and walked past the modest house, ‘52 Shepherd Street’, where Don’s family lived between 1911 and 1920. My London-based aficionado friend and his father spent a memorable day at Bowral during this World Cup. They were given a tour of Bradman’s Bowral, the house, the museum, the Oval, and the surrounding areas thanks to the generosity of Rodney Cavalier and Bernadette Mahony, authors of a fascinating preliminary essay on ‘The Bradman Family of Cootamundra District and Bowral’, (published in Between Wickets, Volume 3, Summer 2014-2015, a journal brought out by the Cricket Publishing Company of New South Wales), Rina Hore, director of the Bradman Mus­eum, and Andrew Lee­ming, cur­rent owner of ‘52 Shepherd Street’ (Twitter handle: The Tank Stand @52_Shepherd_St).

I took vicarious pleasure in my fri­end’s description: “The first stop was 52 Shepherd Street.... This is owned by And­rew Lee­ming, an Australian who wor­ked in Boston and has now returned to work on this project. He bought the house in 2008 and has spent the last few years renovating...the house to try to recreate what it looked like when the Bradman family lived here. He’s used conservation architects and builders and...even focussed on trying to match the [old] paint, by mixing and matching modern-day colours. Even the garden at the back includes plants and flowers from the early 20th century.... The water tank where Don is supposed to have practised for hours with a golf ball and stump has been recreated with such detail. For amateur cricketers, maybe you can hit the golf ball once but we saw footage of Bradman doing it repeatedly—hitting it back multiple times.”

(N. Ram is chairman and publisher of The Hindu group of publications. He has played first class cricket for Madras.)

Can You Bank On Them?