Grim prospects for all sectors, depressed business sentiment and poor employment potential: can it get any worse? 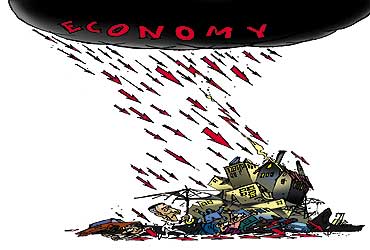 outlookindia.com
-0001-11-30T00:00:00+0553
Last month, in an economy-related seminar in Mumbai, someone asked: "Which are the industries that are doing well in India?" There was silence for about a minute before someone tentatively suggested: "Hindi films?"

For all Yashwant Sinha's pep talk on growth and turnaround by year-end, the much-desired "feelgoodness" continues to elude the economy. Sentiments refuse to perk up despite reports of a good monsoon, big purchases are being postponed all over, companies are on crash diets, and job cuts across the once-booming new economy have frightened consumers into stashing away their piggybanks, in readiness for still worse days.

Still worse days? Isn't a 2.1 per cent industrial growth in April-June (Q1) bad enough? That's the worst in seven years. And core industries grew in Q1 by only 1 per cent, almost one-tenth of Q1 '99-2000? These are steel, cement, electricity, petroproducts...a nation's spine and sinew. From 5 per cent in 2000-01 Q4, real gdp growth slumped to a record low of 3.8 per cent in Q1. Despite several high-octane launches, automobile sales—considered to be the pulse of the consumer market—dropped by 6 per cent. Hindustan Lever reported a 5 per cent drop in sales last year—people are not even buying toothpaste and soap! And despite the freebies!

The manufactured goods market has been on a permanent stock clearance sale for long, with little effect. In fact, the economy could be going through its worst phase in 10 years. A spiral back to 1991? Yes, except that we have no external debt crisis. Something that has funnily ceased to be important—just ask sovereign credit raters Moody's and Standard & Poor's which downgraded rupee obligations rating by one notch on August 7. s&p has even changed all currency obligations outlook from Stable to Negative. Sinha and rbi chief Bimal Jalan may protest too much but, as a senior economist quipped, "the rating agencies haven't told us anything we didn't know ourselves."

Explains a senior analyst with a foreign fund: "The external debt trap of 1991 has been replaced by a domestic debt trap with the budget deficit getting too high for comfort and states virtually bankrupt." With the government almost trying to reverse globalisation by steadily hiking import tariff, exports dwindling and foreign investors moving off elsewhere, our global perception couldn't be worse. Agrees Paul A. Laudicina, vice-president, global business policy council, A.T. Kearney, which recently ranked India seventh among developing countries on fdi confidence index: "India has been tremendously disadvantaged because of bureaucracy and red tape, inconsistencies and unattended needs of infrastructure." And the neglect is visible—last year, India attracted only $2 billion fdi while China got $34 billion. Even portfolio investment dropped one-third to $1 billion.

All this points to a very long and cold year before one can even talk of recovery. Indeed, nobody seems to have seen a future that works. Especially industry. Business confidence is down to a two-year low, says ncaer. Consider the outburst of Tarun Das, cii director-general: "The government has been a zero on implementation of policies and infrastructure projects. The disinvestment process is slow because there are so many people resisting it. The fall of the stockmarkets and the uti crisis, together with the decline in industrial output have created a situation where even 5 per cent growth will be difficult." This is the same man who gave Sinha 10/10 for the Budget in March.cii's latest quarterly Business Outlook Survey foresees grim prospects for all sectors, depression in general business sentiment and poor employment potential. Basic and capital good producers fear business will be worse in the next six months. And consumer goods companies expect a squeeze on profit margins as the consumer tightens her fist.

Just why isn't the consumer buying? Explains industrialist Adi Godrej: "The consumer is cautious. She is looking for even stronger value-for-money options and reluctant to enter into discretionary spending." The drop in purchasing power is uniform across regions, and sharp in the rural areas.

Marketing experts believe that rural markets hold the key to demand revival. But agriculture has been in the doldrums for a few years. Over 1999-2001, farm output grew by 0.7 per cent and 0.2 per cent. Two normal monsoons with deficient rainfall in about 71 zones hit oilseeds production and, helped by cheap imports, weakened producer prices. With the food economy also in glut (total grain stocks with fci and states are 60 mt) and exports impossible, grain farmers' income too has reduced. Much of the rural purchasing power comes from these two sections.

That the high growth of the '90s has gone against the rural economy is clear from a simple statistic: while agriculture contributes only a quarter of the gdp, it still continues to support 60 per cent of the population. Result: a clear 35 per cent of Indians are marginalised from the benefits of growth. The problem has been aggravated by reforms bypassing the sector. Till the early '90s, the highest-growing states were the predominantly agricultural states of Haryana and Punjab. They have now slipped to the middle, yielding to Gujarat and Maharashtra, leaders in infrastructure and industry.

If agriculture, unable to offer the faithful more money, is throwing out people, can't industry and services absorb them? Services did, as economist K. Sundaram's study points out. Between '93-94 and '99-2000, the number of salaried employees went up by 8 million, 75 per cent of them in urban areas, accounting for one-third of the total rise in workforce. But the number of workers in agriculture and allied activities fell. As for industry, reforms brought in competition from imports but protection continued in small, curious ways, leaving the manufacturing sector to die on its feet. Most of the recent growth has come from a boom in demand for services that now yield half of our gdp. Now even their growth has slackened. And if there aren't enough jobs to do, businesses to run or demands to service, what will the consumer do but just keep her fingers crossed and wait for the bad times to pass?

it could be a long wait. Says Prakash Dalal, chief marketing officer, Kotak Mahindra Mutual Fund: "The general slowdown in the economy is hurting business which could lead to an increase in defaults." And the financial sector is in a long-neglected mess. Ten per cent of the financial sector is bad loans—that's a jaw-dropping Rs 80,000-90,000 crore! This is mainly the refuse of moribund industry. In the last few years, banks have received huge money and their deposit base has risen to over Rs 10 lakh crore. But to meet accountability pressure and restrict npas (now Rs 52,000 crore), they aren't lending to sectors other than consumer loans.

Not that industry is keen, despite a bank rate of 7 per cent. According to cii, its members are not interested in greenfield projects when the flavour of the moment is clearing inventories.Also, several big groups are sitting on piles of cash, preferring to sit out the downturn. So what are the banks doing with the money? Why, giving it to the government!

That should be a good thing. Especially as the government has admitted to Rs 50,000 crore of unspent funds in various ministries—there goes the entire cost of the Golden Quadrilateral Highway project! So why doesn't Sinha start minding his p's and d's—power, pds, disinvestment, downsizing? Because he cannot plan for divestment or investment (see Why Six Per Cent Won't Give). With 36 per cent of fiscal deficit already incurred and plan expenditure dropping by 5 per cent, one would prefer to depend on the private economy, except that here too, despondency and dependency prevail.

A recent cii poll found over half of the ceos in gloom: they felt the current slowdown was the beginning of a recession and sentiments were worsening by the day. The way out is a revival of domestic demand, through immediate commissioning of 10 big infrastructure projects by the government. So why doesn't the government do so?

Because infrastructure, especially power, is in a mess. Even as states renege on contracts with foreign companies and Enron becomes the only news out of India, a government committee recommends a Rs 40,000-crore donation to the state power boards, one of the two factors responsible for the states turning bankrupt (the other is the pay commission). Yet another unimplementable solution!

That industry isn't happening anymore is clear from the sharp drop in imports since '99. Last year, non-pol imports dropped 13 per cent, mainly due to negative capital goods imports, and by 2.4 per cent in Q1. Meanwhile, the BoP situation couldn't be better. Forex reserves are close to $44 billion, current account deficit dropped by half to 0.45 per cent last year and Q1 recorded a 2.7 per cent surplus!

Assured that we won't face 1991 again, the government is sitting pretty, tinkering with selective protection and considering it Reforms Part Deux. So much of the grand Budget 2001 is dependent on new legislation that our esteemed democracy is certain to derail it. Consider the Bills pending before Parliament—on Convergence, Fiscal Responsibility, Competition, Amendments to Electricity, Banking, Industrial Disputes, Contract Labour Acts... and none of these may fructify before winter.

Says Manoj Pant, professor, jnu: "If some of the obvious domestic institutional changes are made, things may improve. If not, gdp growth revival will have to wait for global recovery. Yet, I feel, there's enough efficiency slack in the economy which, if removed, could yield the extra one per cent gdp growth. But where is the political will?" Take agriculture, the great hope for this year. No politician would tamper with the foodgrain support operations, yet, without that, a bountiful monsoon may end up hurting farmers, most of whom suffer from poor stocking facilities and an overdose of agents. For the last few years, our grain targets have hovered between 196 mt and 209 mt. So, the problem is not the level of supplies, but its management.

This year, despite huge stocks, the government has fixed the higher target of 209 mt. The fci manages to lift only 40 per cent of the produce and that too, at a time when most of the poorer farmers would have already harvested the grain due to early planting and poor stocking facilities. So fci operations help traders and richer farmers.Secondly, we produce enough foodgrain for domestic consumption but at too high a price—thanks to government interference and poor productivity. Coupled with inter-state trading curbs, this results in pockets of scarcity and feasts for fci rats. But, as former chief economic advisor Ashok V. Desai says: "Our gdp is gross, so even rotting foodgrains might just give us good growth!" However, he adds, to achieve even the trend rate of 3 per cent, farm output this year must leapfrog by a huge 9 per cent!

It's no news to food minister Shanta Kumar. But he and the rest of the government continue to practice business-as-usual and carry the slowdown further. In Q1, banks lent 91 per cent of funds to the government and industry got 9 per cent. Prompting Jalan to carp at Sinha's brief address to a function in the capital recently: "The FM is exercising great verbal restraint, though he doesn't do it on the fiscal front." And since the problem is yet to be acknowledged, the solutions will be farther off. Now that our stockmarkets are the cleanest in the world and FIs in doldrums, industry may just become extinct soon. Is it already reforms, rip?

With Charubala Annuncio and Arindam Mukherjee