Weapons In The Fridge

Tomorrow if Pakistan ceases to be useful, the US will simply wash its hands of them. But tomorrow is another day, and today Musharraf is US' best buddy. 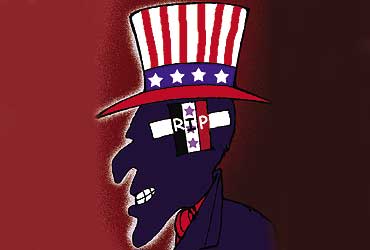 outlookindia.com
-0001-11-30T00:00:00+0553
If I were an American, my ears would burn in shame. If I were an Iraqi, my ears would burn in anger. Given Saddam Hussein's track-record, no right-thinking person can be on his side. But as it turns out, no right-thinking person can be on George Bush's side either. The Bush administration had turned every law, rule and trick in the book to twist the tail of the Evil One. But it looks as if there isn't much of a tail to twist. So far, the surprise raids by the UN weapons inspectors on Iraqi factories and palaces, armouries and barracks, have yielded no secret hoards of chemical, biological and nuclear weapons. So what did the Americans base their intelligence on? How were they so sure Saddam Hussein had this secret cache of deadly weapons? Either the Iraqis have weapons that they have succeeded in concealing beautifully—in which case the Americans are not as smart as we presume. Or the Iraqis simply don't have the weapons they are accused of possessing—in which case the Americans are not as truthful as we assume. Either way, the Americans don't come off very well. If I were an American, I would be ashamed.

And if I were an Iraqi, I would be fuming. I may not love my leader, but my national pride would be wounded if I saw UN inspectors searching kitchen refrigerators in the presidential palace for biological weapons. Residences of Heads of State are kept out of bounds for foreign inspections on a matter of principle, national pride and sovereignty. But Iraqis have been stripped of even that elementary courtesy. Bad enough palaces are raided, but searching refrigerators is an act of wilful and needless humiliation. Either they're playing a bad joke or they are full of malice.

Having found nothing so far, the Americans are trying to get the UN inspectors to virtually kidnap Iraqi scientists and bribe them with asylum in exchange for information on where Saddam is hiding his weapons. It's amazing how Bush is itching for a fight. So what if chemical weapons haven't been found. That's no proof Iraq doesn't have them! As that line of argument gets increasingly untenable, the Bush administration is trying a new tactic—war should be waged against Saddam Hussein for his human rights abuses and treatment of Kurds and prisoners of the 1980s Iran-Iraq war. That line of reason is fine, except for two flaws. Firstly, how tenable is it to punish Saddam Hussein for old crimes, and, secondly, when he was waging those atrocities, guess who was on his side? But then, remember the American presidential mantra—the crux of Uncle Sam's special relations with deadly dictators—"So what if he is a sonofabitch, he is OUR sonofabitch!" During the Iran-Iraq war, America supported Saddam Hussein because he was fighting their foe, Iran. Enemy's enemy is my best buddy. At that time, Saddam Hussein was their man and so the Americans chose to turn a blind eye to all his sins.

As the Americans are now turning a blind eye to the sins of General Musharraf. He is the most important ally in their war against Al Qaeda, so the Americans choose to ignore the reports now leaking about Pakistan's secret deal with North Korea, exchanging nuclear technology for missile parts. More concrete evidence has surfaced so far about Pakistan and North Korea's possession of deadly weapons than of Iraq. Using the same logic, Americans should be organising a "regime change" in Islamabad. But of course the question doesn't arise simply because Pakistan is one of the hubs of current US strategic interests, as is Ukraine and Turkey, because their bases are needed for Yankee wars in Afghanistan and Iraq respectively. So now the US is generously handing out financial sops to Ukrainian and Pakistani dictators, while vociferously pushing Turkey's entry into the European Union.Expediency is the name of the American game. Tomorrow if Pakistan ceases to be useful, Americans will have no compunction in washing their hands of—as they have done in the past.

But tomorrow is another day and today General Musharraf is America's buddy. And that should make our ears burn too because Pakistan's clandestine deal with North Korea threatens the Indian subcontinent. How can Americans argue that Kashmir is a flashpoint, but not smuggling of weapons of mass destruction? They talk sanctimoniously about their global war against terrorism, but look the other way when a grave threat endangers one-fifth of humanity. Clearly, global action needs to be taken only if Americans are jeopardised.

What the US doesn't realise is that these blatant double standards are actually counter-productive. The US will sorely regret their lack of principle and consistency in their war against terrorism. Last year, the Americans bribed Afghan warlords to lubricate their entry. This year, the warlords have started ambushing US soldiers in southern Afghanistan.

Likewise, if Bush now fails to pressure Pakistan regarding its possession of weapons of mass destruction, it is Al Qaeda that will become a bigger and more lethal threat. The US ought to realise that support for the Taliban and Al Qaeda in Pakistan is not only official, organised through sections of the isi, but spontaneous and mass-based as well.

Bush war and Osama weapons are a Molotov cocktail that can jeopardise humanity. What should worry Washington is that missiles and nuclear technology in Pakistan can easily fall into the hands of Al Qaeda, who after all, are single-mindedly targeting US citizens. Ultimately, innocent American civilians around the world will pay the price for the Bush administration's sins—exactly as innocent Iraqi civilians will pay the price for Saddam Hussein's. All is fair in war for governments. But it isn't, for ordinary citizens. We are lucky if it's only our ears that are burning. There are millions whose homes, livelihoods, future are about to burn.